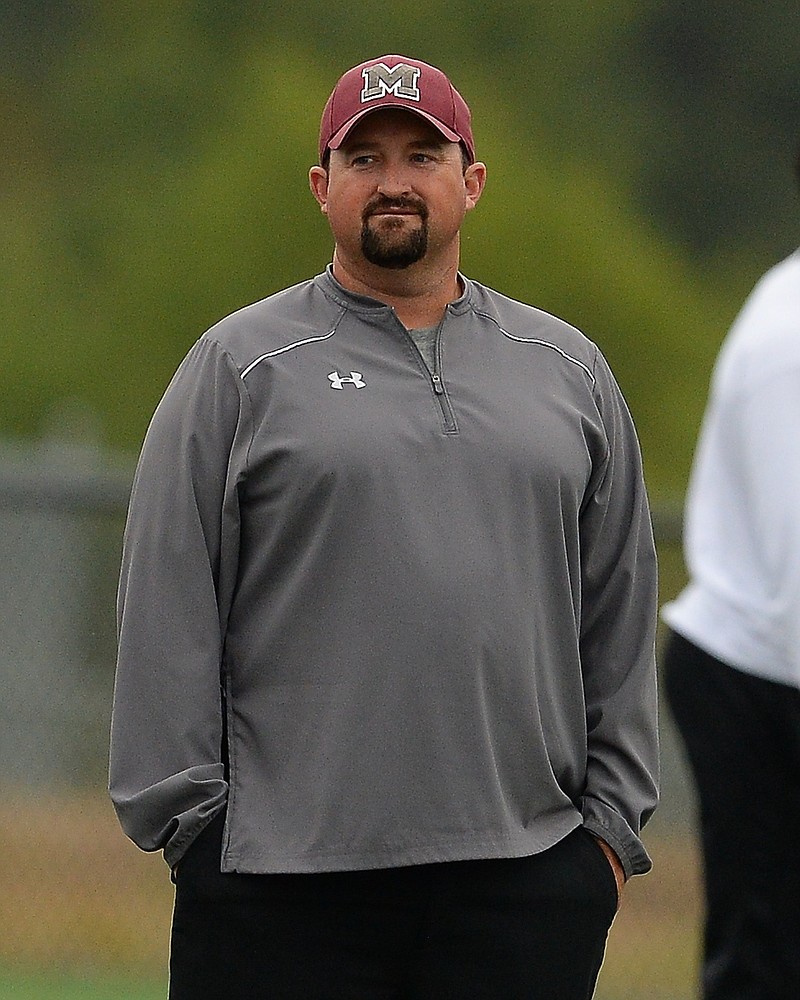 Morrilton head coach Cody McNabb is shown in this photo. (Special to the Democrat-Gazette/JIMMY JONES)

Morrilton Coach Cody McNabb didn't have many starters returning from a team that finished 6-5 last season, so continuous improvement from the Devil Dogs was what he was banking on to start 2021.

Six games in, he's seen that and then some.

"With such a very young team, we knew there would be some ups and downs," McNabb said. "We had some bumps early, and we kind of weathered that. But I really think we've gotten better as the year's gone on. I always thought we'd be a lot better at the end of the year than what we would be at the beginning."

That overall development is a huge boost for Morrilton (2-4, 1-2 5A-West Conference), which is tied for fifth in the conference and about to enter a three-game stretch with games against Alma, Harrison and Vilonia. A victory over Alma (3-3, 2-1) would put Morrilton squarely back in the playoff picture.

But for McNabb, a late-season push starts in-house for the Devil Dogs.

"The mentality here is blue collar," he said. "That's the culture we try to create, to just keep working and keep getting better. We knew we were young and had some things to learn. So we wanted to be honest about it all.

"There's been surprises both ways, good and bad. But that's a part of the learning process. They've done a good job of handling setbacks and coming back from them."

The Devil Dogs have lost three of their last four games but played Farmington tough last week. Morrilton trailed by just a field goal until the Cardinals scurried away with a late flurry to grab a 15-0 victory. McNabb saw glimpses of improvement in that game as well, and he hopes it trickles over Friday against Alma in a game that's expected to be close.

"[Alma] seems a little more explosive, a little more athletic," McNabb explained. "The quarterback that's come in [Joe Trusty] has certainly helped them, too, because he's got the ability to beat you with his arm and his feet.

"Coach [Rusty] Bush has got those guys improving as the year has gone on as well. But we've got to stay on schedule. We've got to stay ahead of the sticks and be able to be on the plus side of the turnover margin. If we can do those things and stay away from big plays on defense, it'll certainly give us a chance."

Mena has been trying to treat Friday's clash with Ozark as just another conference encounter, but Coach Craig Bentley knows better.

"The guys will say it's just another week, but no it's not," Bentley said. "They need to understand it's not just another week. It sounds good, but this is a big one because up until last year, Ozark had a pretty tight grip on this conference."

It's without a doubt the biggest game to date in the 4A-4 for Mena (5-2, 3-0), which put an end to Ozark's three-year run as conference champs last year by beating the Hillbillies during the regular season and winning its first league title in more than two decades.

The Bearcats haven't skipped a beat this year within the conference.

"We have 16 seniors who've done a really good job of stepping up," Bentley said. "And most of them, up to this point, had kind of been the supporting cast. They've kind of been able to sit back and see the right way to do things. And now, they're stepping up to the challenge, and I think that's that key to everything that's going on for us."

Austin Rose has unquestionably contributed to Mena's success. The senior, who broke his leg last year in the team's 23-20 victory over Ozark, has completed 75 of 138 passes for 1,286 yards and 15 touchdowns. Another senior, Caleb Peters, has caught 28 passes for 399 yards and 4 scores for the Bearcats, who've won their past eight league games dating back to 2020.

But if Mena intends on keeping that streak going, it's got to deal with what Ozark (3-2, 2-0) typically brings to the table.

"They're big, just physically imposing," Bentley explained. "They've got a lot of different players, a lot of different guys that can do some things when they get the ball in their hands. And then defensively, they fly around, are super aggressive and make a lot of big plays.

"It's going to be a war. We've got to be disciplined on defense, and we can't afford a slow start on offense. We don't necessarily have to play perfect football, but we've got to play clean football."

Scoring points hasn't been a problem at all for Magnolia (2-5, 2-1 5A-South) this season. Turnovers, however, have been.

"Man, if we don't turn the ball over, we're a hard offense to stop," Magnolia Coach Mark King said. "We're 2-5, but we're a much better team than that. If we just take care of the football, I don't think anybody can stop our offense if we don't stop ourselves, and it's been that way from Week 0. Against Harrison, we had 10 quarterback and center exchanges on the ground

"Against Crossett the next week, we put the ball on the ground nine times. We felt like we should've won both of them."

The Panthers, who started the season with losses in their first four games, may have had a chance to win last week's game against Class 5A No. 6 Camden Fairview but lost three fumbles. Magnolia ran just 34 offensive plays in the game, which limited the team to just 265 yards total, compared to 70-plus snaps for the Cardinals, who went on to win 44-25.

Prior to that, Magnolia was averaging nearly 30 points and more than 400 yards of offense, including just over 375 yards on the ground. In a 50-30 loss to Class 6A No. 6 El Dorado on Sept. 17, the Panthers rushed for more than 400 yards, with Deraylan Williams finishing with 247 yards.

King feels his team is capable of producing that kind of output routinely, which would make them a tough out come postseason time. Magnolia will play Hot Springs (4-2, 2-0) in a key conference tilt Friday, and the third-year coach noted that the Panthers' chances of winning are slim if they continue to give the ball away.

"We've got to take care of business," he said. "[Hot Springs] is big, physical and tough. They've had some success this year, and Coach [Darrell] Burnett does a great job with those guys.

"Their quarterback [Isaac Shelor] is a three-year starter, and he's got good receivers to throw to. We've got to get some pressure on him to make him uncomfortable. But we know we'll have our hands full."

Back-to-back losses to end September hasn't dented Pocahontas' confidence. If anything, it gave the Redskins a chance to reflect, and that's done a world of good according to Coach Charles Baty.

"I'm just very proud of how these guys continue to get better every week," he said. "We had those rough losses to two very good teams. But they've bounced back, looked in the mirror and said that there are some things that we can get better at. And they have."

Pocahontas (4-2, 2-1 4A-3 Conference) has been perfect in October, and Baty said it's because of how the team has been able to refocus, starting in workouts. Those habits, he explained, have carried over in games, and that's crucial for a ballclub that lost so much production offensively and defensively from a year ago.

Still, Baty has been encouraged by what he's seen. He said his offensive line, as well fullback Reed Bigger, is playing at a high level, which helps open things up for all-state standout Connor Baker. The senior, who's made the switch from running back to quarterback and starts at linebacker on defense, has rushed for 1,148 yards and 19 touchdowns on the season. He accounted for nearly 300 yards of offense last week in a 49-21 victory over Cave City. But Baker has had help.

"I've been very impressed with Grayson Maupin, who's really stepped up at running back," Baty said. "And then defensively, we just continue to fly to the football, and our defensive line has been outstanding. Ethan Morris, Jordan Wilkerson, Jack Privett, Braden Vancil. ... We're rotating four to five guys up there, and they've done really well.

"And then our kicking game, with Ethan DeYoung and Marcus Streeper, has been as good as it's been in a long time. They've really helped us on special teams, both offensively and defensively, with field position."

Up next for the Redskins is Trumann (5-1, 3-0), which is playing as well as any team in the conference right now. The Wildcats, winners of four in a row, are tied with Rivercrest atop the league after dismantling Gosnell 40-14 last week.

"They play extremely hard and are well-coached," Baty said of Trumann. "You notice immediately when you watch them offensively that there's a lot of misdirection. It's hard to find the football, and if you don't play technique, that can give you a lot of problems. We're very concerned about that.

"Defensively, they're sound and are not going to give up the cheap ones. We've just got to do our jobs on both sides, take care of the football and play well on special teams. If we do that, we'll have a great opportunity for success."