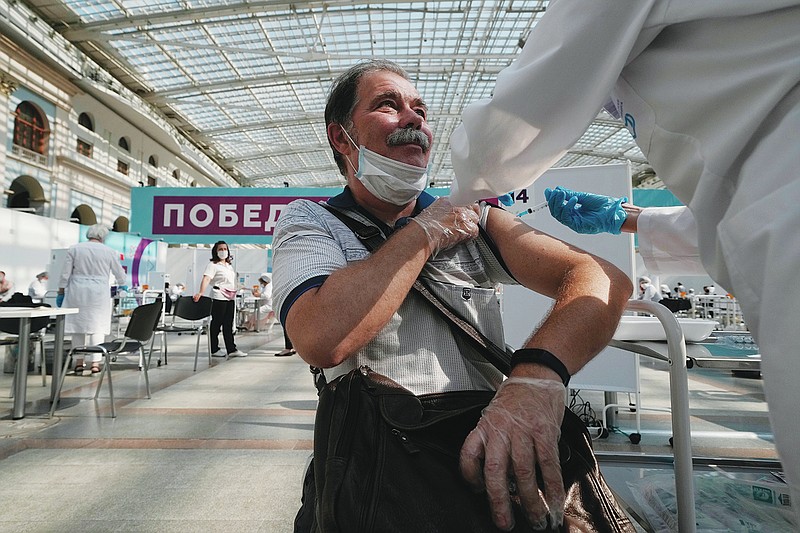 FILE - In this July 12, 2021, file photo, a medical worker administers a shot of Russia's Sputnik V coronavirus vaccine at a vaccination center in Gostinny Dvor, a huge exhibition place in Moscow, Russia. Russians are flocking to Serbia to receive Western-approved COVID-19 shots. Although Russia has its own vaccine known as Sputnik V, the shot has not been approved by international health authorities. (AP Photo/Pavel Golovkin, File)

BELGRADE, Serbia -- When Russian regulators approved the country's own coronavirus vaccine, it was a moment of national pride, and the Pavlov family was among those who rushed to take the injection. But international health authorities have not yet given their blessing to the Sputnik V shot.

So when the family from Rostov-on-Don wanted to visit the West, they looked for a vaccine that would allow them to travel freely -- a quest that brought them to Serbia, where hundreds of Russian citizens have flocked in recent weeks to receive Western-approved covid-19 shots.

Serbia, which is not a member of the European Union, is a convenient choice for vaccine-seeking Russians because they can enter the allied Balkan nation without visas and because it offers a wide choice of Western-made shots. Organized tours for Russians have soared, and they can be spotted in the capital, Belgrade, at hotels, restaurants, bars and vaccination clinics.

"We took the Pfizer vaccine because we want to travel around the world," Nadezhda Pavlova, 54, said after receiving the vaccine last weekend at a sprawling Belgrade vaccination center.

Her husband, Vitaly Pavlov, 55, said he wanted "the whole world to be open to us rather than just a few countries."

Vaccination tour packages for Russians seeking shots endorsed by the World Health Organization appeared on the market in mid-September, according to Russia's Association of Tour Operators.

Maya Lomidze, the group's executive director, said prices start at $300 to $700, depending on what's included.

Lauded by Russian President Vladimir Putin as world's first registered covid-19 vaccine, Sputnik V emerged in August 2020 and has been approved in some 70 countries, including Serbia. But the WHO has said global approval is still under review after citing issues at a production plant a few months ago.

On Friday, a top World Health Organization official said legal issues holding up the review of Sputnik V were "about to be sorted out," a step that could relaunch the process toward emergency use authorization.

Other hurdles remain for the Russian application, including a lack of full scientific information and inspections of manufacturing sites, said Dr. Mariangela Simao, a WHO assistant director-general.

Apart from the WHO, Sputnik V is also still awaiting approval from the European Medicines Agency before all travel limitations can be lifted for people vaccinated with the Russian formula.

The long wait has frustrated many Russians, so when the WHO announced yet another delay in September, they started looking for solutions elsewhere.

"People don't want to wait; people need to be able to get into Europe for various personal reasons," explained Anna Filatovskaya, Russky Express tour agency spokeswoman in Moscow. "Some have relatives. Some have business, some study, some work. Some simply want to go to Europe because they miss it."

Serbia, a fellow-Orthodox Christian and Slavic nation, offers the Pfizer, AstraZeneca and Chinese Sinopharm shots. By popular demand, Russian tourist agencies are now also offering tours to Croatia, where tourists can receive the one-shot Johnson & Johnson vaccine, without the need to return for a second dose.

"For Serbia, the demand has been growing like an avalanche," Filatovskaya said. "It's as if all our company is doing these days is selling tours for Serbia."

The Balkan nation introduced vaccination for foreigners in August, when the vaccination drive inside the country slowed after reaching around 50% of the adult population. Official Serbian government data shows that nearly 160,000 foreign citizens so far have been vaccinated in the country, but it is unclear how many are Russians.

In Russia, the country's vaccination rate has been low. By this week, almost 33% of Russia's 146 million people have received at least one shot of a coronavirus vaccine, and 29% were fully vaccinated. Apart from Sputnik V and a one-dose version known as Sputnik Light, Russia has also used two other domestically designed vaccines that have not been internationally approved.

Russian Health Minister Mikhail Murashko recently said administrative issues were among the main holdups in the WHO's review process.

Judy Twigg, a political science professor specializing in global health at Virginia Commonwealth University, expects Sputnik V to be approved eventually, but "maybe not by the end of this year."

"The WHO has said that it needs more data, and it needs to go back and inspect some production lines where it saw issues early on. Those re-inspections are a multiweek process, with good reason. It's not something that they just gloss over lightly."

Amid low vaccination rates and reluctance by the authorities to reimpose restrictive measures, both Russia and Serbia have seen covid-19 infections and hospitalizations reach record levels in the past weeks.

The daily coronavirus death toll in Russia topped 900 for a second straight day on Thursday -- a day after reaching a record 929. In Serbia, the daily death toll of 50 people is the highest in months in the country of 7 million that so far has confirmed nearly 1 million cases of infection.

Pavlova said the "double protection" offered by the Pfizer booster shots would allow the family "to not only travel around the world, but also to see our loved ones without fear."

Since the vaccine tours exploded in popularity about a month ago, they have provided welcome business for Serbian tour operators devastated by the pandemic in an already weak economy. The owner of BTS Kompas travel agency in Belgrade, Predrag Tesic, said they are booked well in advance.

"It started modestly at first, but day by day numbers have grown nicely," Tesic said.

He explained that his agency organizes everything, from airport transport to accommodations and translation and other help at vaccination points. When they return for another dose in three weeks, the Russian guests also are offered brief tours to some of popular sites in Serbia.

Back in Russia, some Moscow residents said they understood why many of their fellow Russians travel abroad for vaccines. But Tatiana Novikova said homegrown vaccines remain her choice.

"I trust ours more, to be honest," she said. 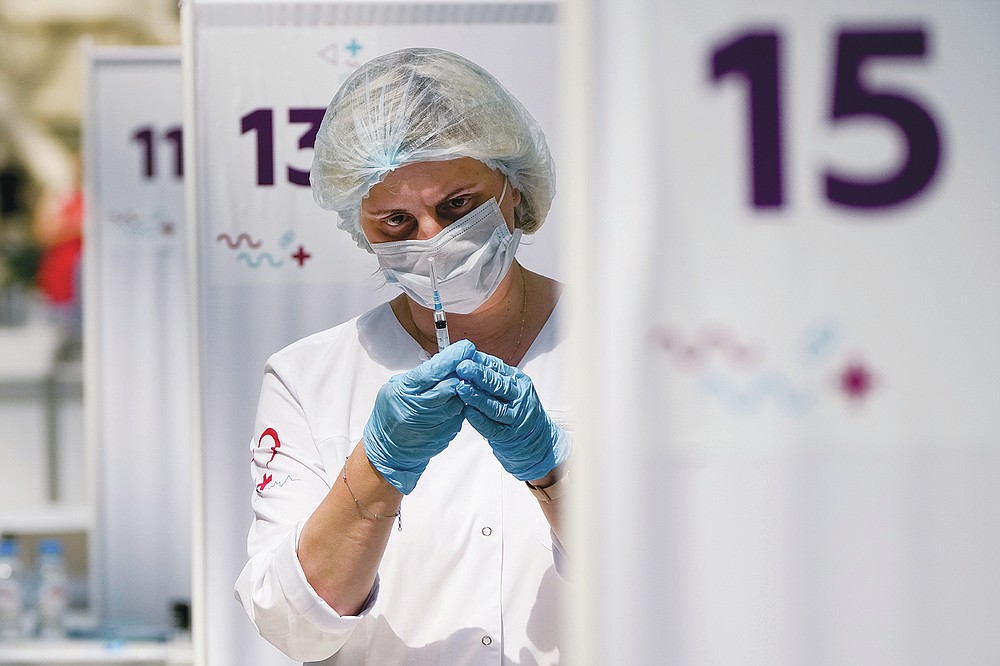 FILE - In this Tuesday, July 13, 2021 file photo, a medical worker prepares an injection of Russia's Sputnik V coronavirus vaccine at a vaccination center in Gostiny Dvor a huge exhibition place in Moscow, Russia. The World Health Organization is still reviewing data about Russia's Sputnik V vaccine as part of hopes that it can be approved by the U.N. health agency for emergency use against coronavirus, but said Tuesday, Oct. 5 that no decision is imminent.(AP Photo/Alexander Zemlianichenko, File) 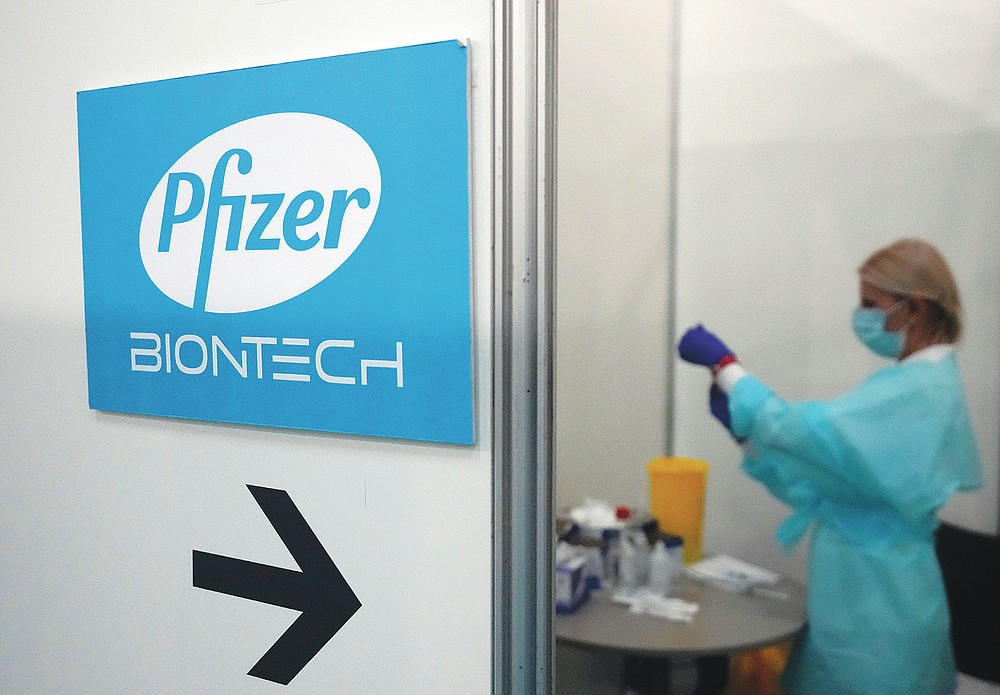 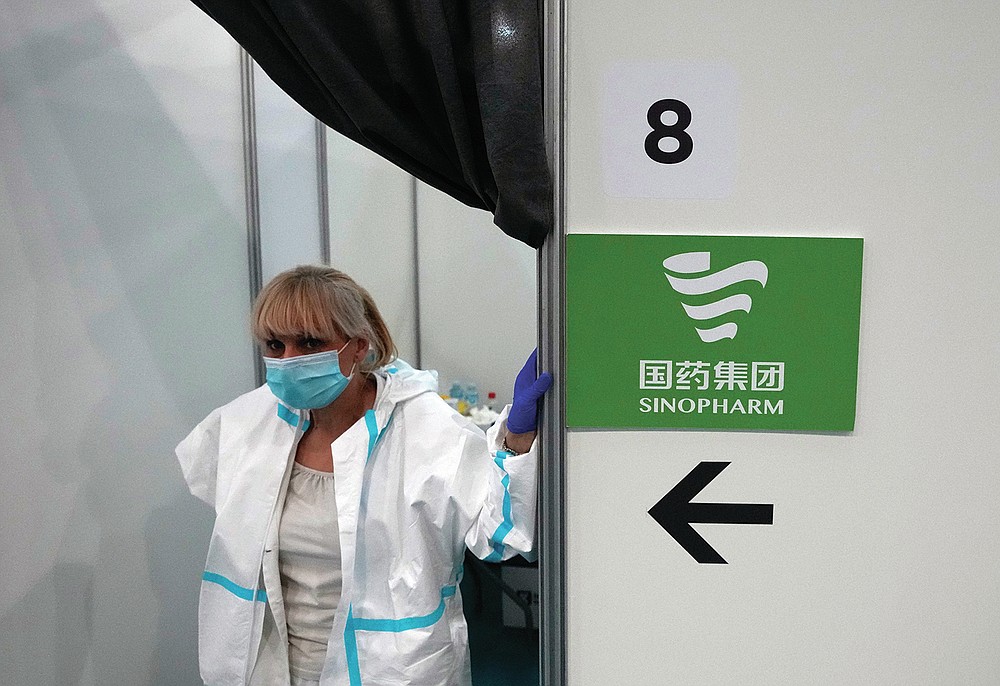 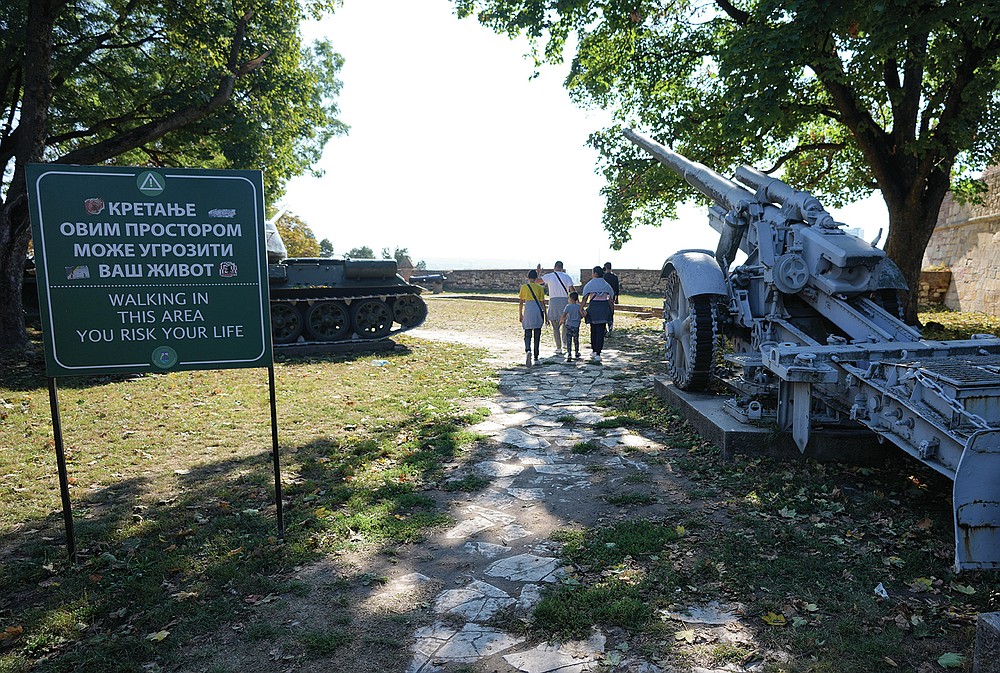 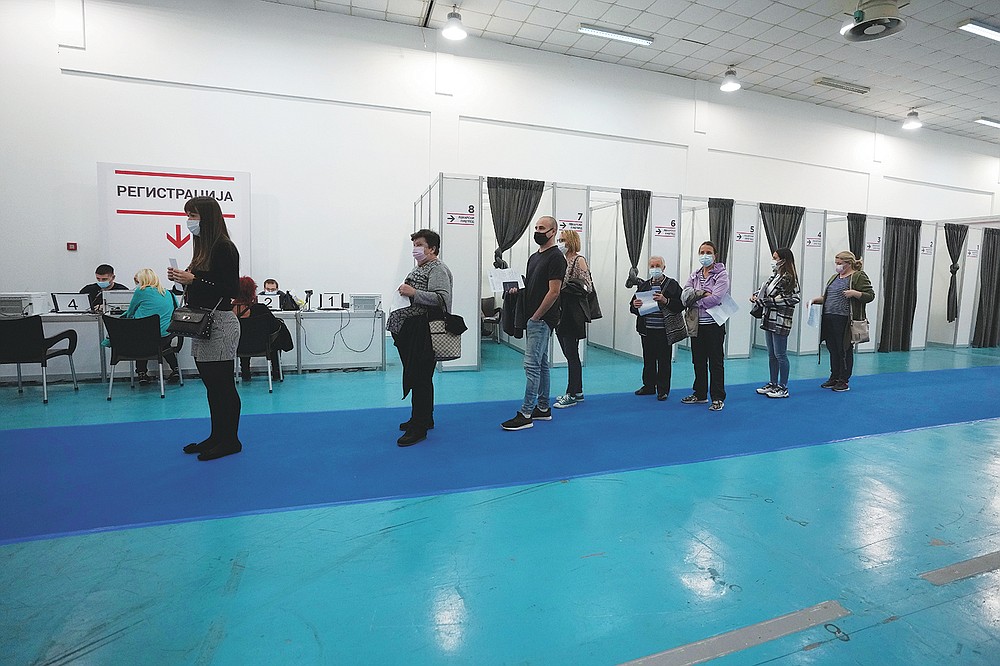 People wait in line to receive a dose of a COVID-19 vaccine at Belgrade Fair makeshift vaccination center in Belgrade, Serbia, Saturday, Oct. 2, 2021. Russians are flocking to Serbia to receive Western-approved COVID-19 shots. Although Russia has its own vaccine known as Sputnik V, the shot has not been approved by international health authorities. (AP Photo/Darko Vojinovic) 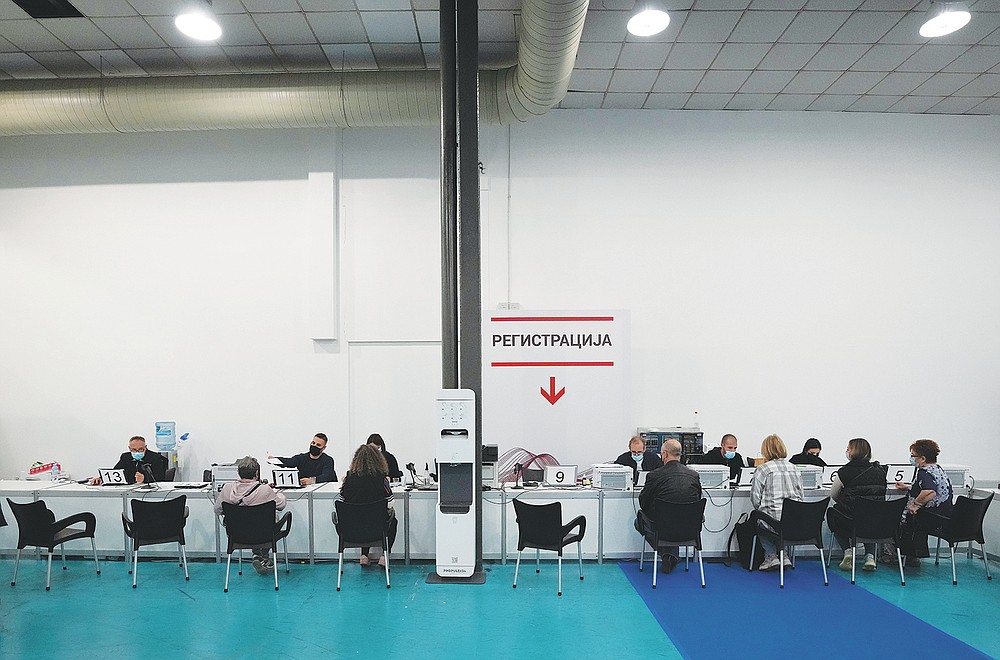 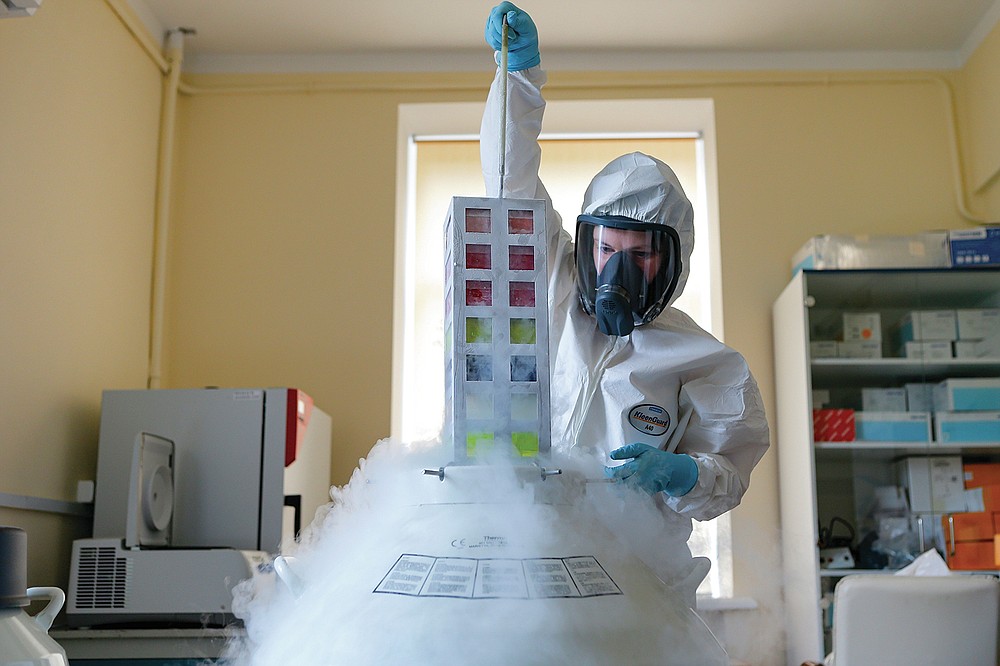 FILE - In this Aug. 6, 2020, file photo provided by Russian Direct Investment Fund, an employee works with a coronavirus vaccine at the Nikolai Gamaleya National Center of Epidemiology and Microbiology in Moscow, Russia. Russians are flocking to Serbia to receive Western-approved COVID-19 shots. Although Russia has its own vaccine known as Sputnik V, the shot has not been approved by international health authorities. (Alexander Zemlianichenko Jr/Russian Direct Investment Fund via AP, File)