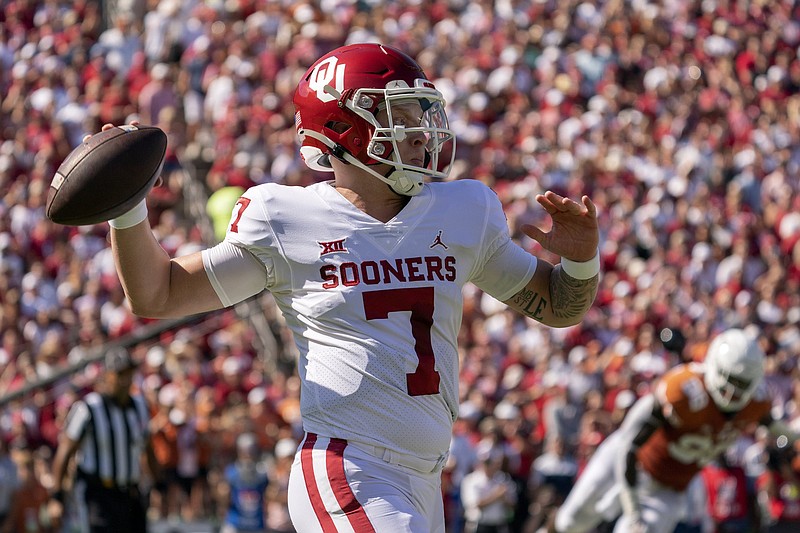 Spencer Rattler (shown) has started all six of Oklahoma’s games this season, but he was replaced by Caleb Williams on the way to a 55-48 win over Texas last weekend in Dallas. Sooners Coach Lincoln Riley has not named a starter for Saturday’s game against TCU. (AP/Jeffrey McWhorter)

NORMAN, Okla. -- Spencer Rattler was the man heading into the season. Now he might not even be the starter.

The Oklahoma quarterback had everything going for himself two months ago. He was a preseason Associated Press first-team All-American who was at the forefront of Heisman Trophy conversations. He was among the most visible players taking advantage of NCAA rules changes that now allow athletes to cash in on their celebrity.

Caleb Williams replaced him last Saturday and rallied the Sooners to a 55-48 win over Texas.

Oklahoma Coach Lincoln Riley wouldn't say how he will play his quarterbacks heading into the fourth-ranked Sooners' game against TCU (3-2, 1-1 Big 12) on Saturday. He said he's not a fan of two-quarterback systems, but wouldn't rule anything out that he thought would help the team.

"I don't plan on naming a starting quarterback this week," Riley said. "We'll see how the week plays out and we'll see where we are when we get to Saturday. The guys have done well. They practiced well today. We'll see how it goes. We'll see Saturday at 6:30."

Oklahoma is handling the situation delicately. Rattler normally talks with reporters on Wednesday, but Oklahoma (6-0, 3-0) canceled its weekly Zoom sessions.

TCU Coach Gary Patterson said he doesn't see Oklahoma changing much with Williams, but he will review past examples of Oklahoma using the quarterback run game to prepare. Williams has 9 carries for 149 yards and 2 touchdowns this season.

"I think they're the same," he said. "One [Williams] is a little more like Jalen Hurts in the fact he's stronger and faster. There's a couple of quarterback plays we'll prepare for. Outside of that, they both get ready to go. ... They both run the offense like the offense is run."

Riley said he gave Rattler Monday off to regroup after his benching. Receiver Marvin Mims said Rattler had the right approach when he returned Tuesday.

"If I got hit with something like that, you know, that's something that's huge," Mims said. "You never know how someone is going to respond and how they're going to deal with something that happened. But he was at practice today and had huge energy. A lot of energy controlling the offense just like he normally does."

Rattler's numbers have been solid this season. He has completed 74% of his passes for 1,371 yards and 10 touchdowns with 5 interceptions. But at times, he has looked uncomfortable in the pocket and has forced throws into coverage.

His problems have gone beyond the numbers. His body language at times has created the perception that he's not a team player, and fans booed him and called for Williams after he threw an interception against West Virginia.

"This guy gets painted a different way publicly than what he really is," Riley said. "He's a great kid. He's worked his tail off here. He's been a really good player here. I have a ton of trust in him."

Williams has earned Riley's trust, too. The true freshman passed for 212 yards and rushed for 88 against Texas, including a 66-yard touchdown run on his first play from scrimmage.

"He came in and won the game for them," Texas defensive back Anthony Cook said. "That was big time."

Williams' mobility helps cover for an offensive line that has potential but is still developing. 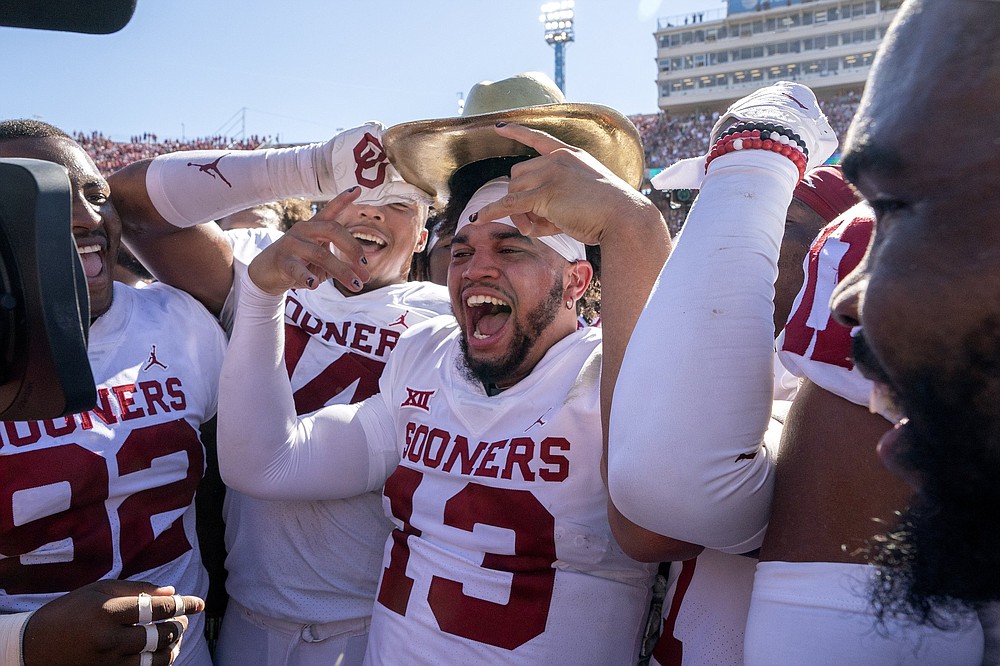 Spencer Rattler has started all six of Oklahoma’s games this season, but he was replaced by Caleb Williams (13, shown) on the way to a 55-48 win over Texas last weekend in Dallas. Sooners Coach Lincoln Riley has not named a starter for Saturday’s game against TCU. (AP/Jeffrey McWhorter) 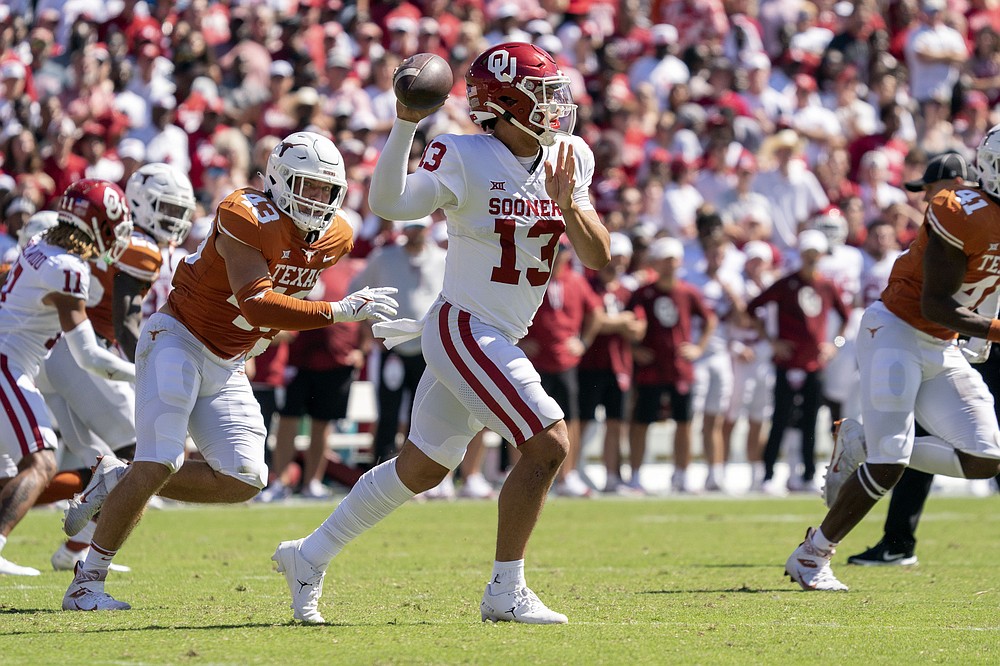 Oklahoma quarterback Caleb Williams (13) looks to pass during the first half of an NCAA college football game against Texas at the Cotton Bowl, Saturday, Oct. 9, 2021, in Dallas. (AP Photo/Jeffrey McWhorter) 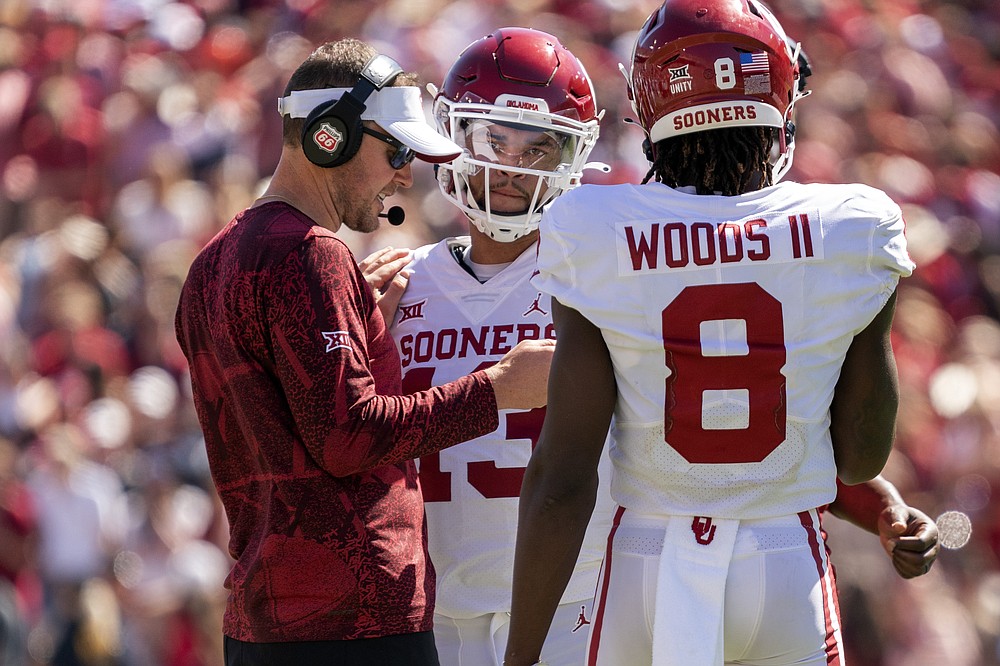 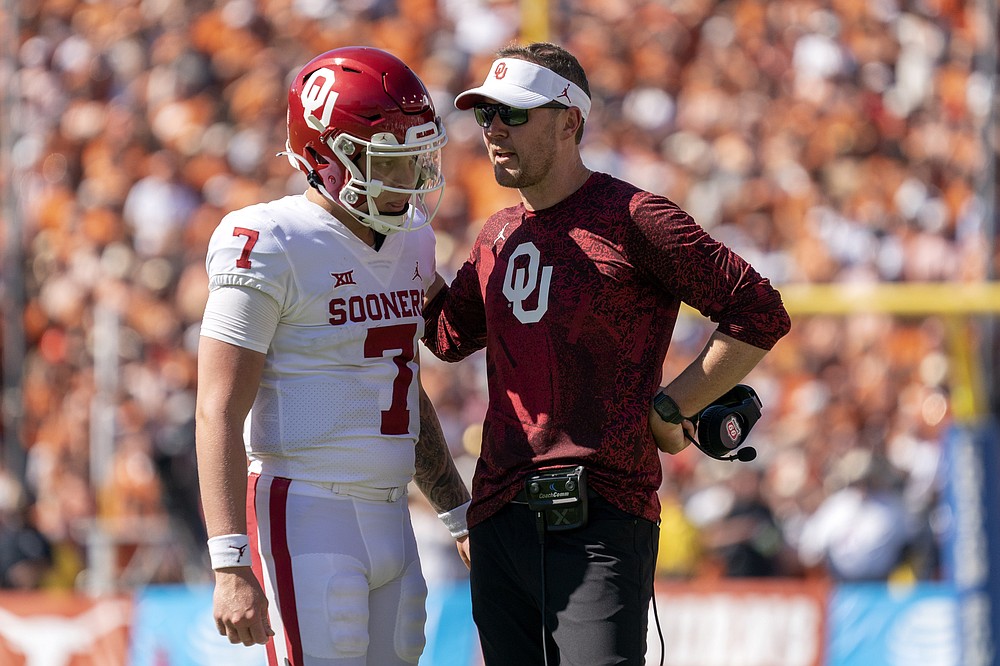 Oklahoma head coach Lincoln Riley talks to quarterback Spencer Rattler before sending Rattler in for a two-point conversion during the second half of an NCAA college football game against Texas at the Cotton Bowl, Saturday, Oct. 9, 2021, in Dallas. (AP Photo/Jeffrey McWhorter) 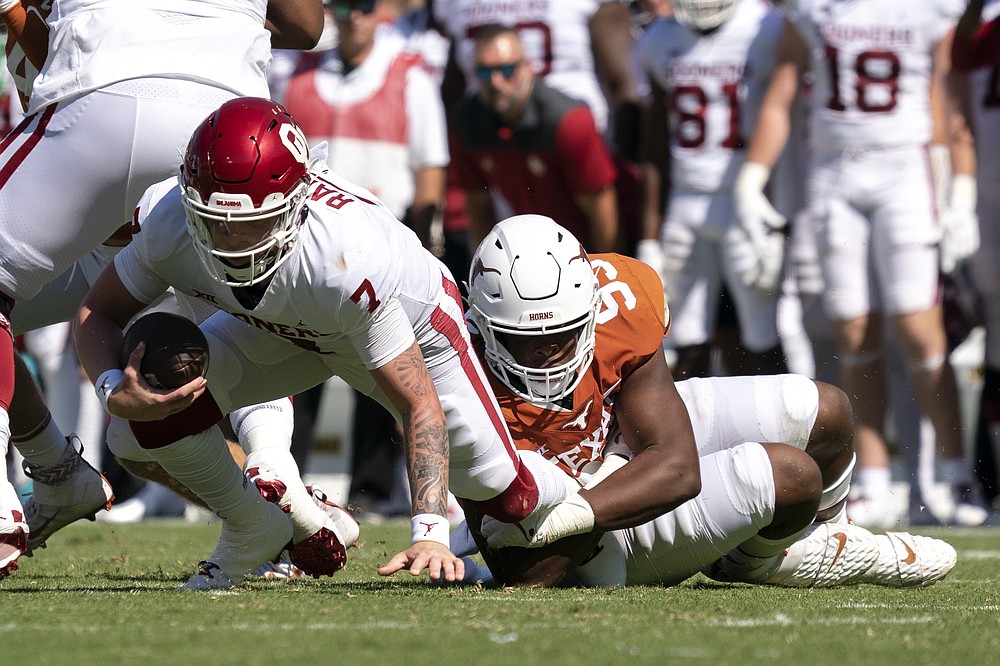 Oklahoma quarterback Spencer Rattler (7) is sacked by Texas defensive lineman Alfred Collins (95) during the first half of an NCAA college football game at the Cotton Bowl, Saturday, Oct. 9, 2021, in Dallas. (AP Photo/Jeffrey McWhorter) 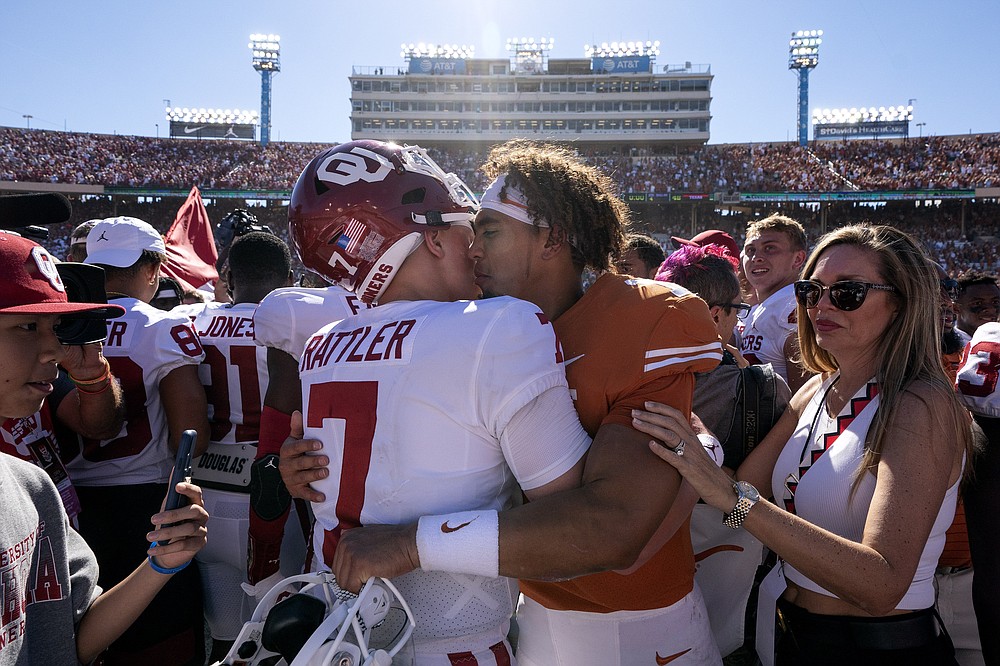