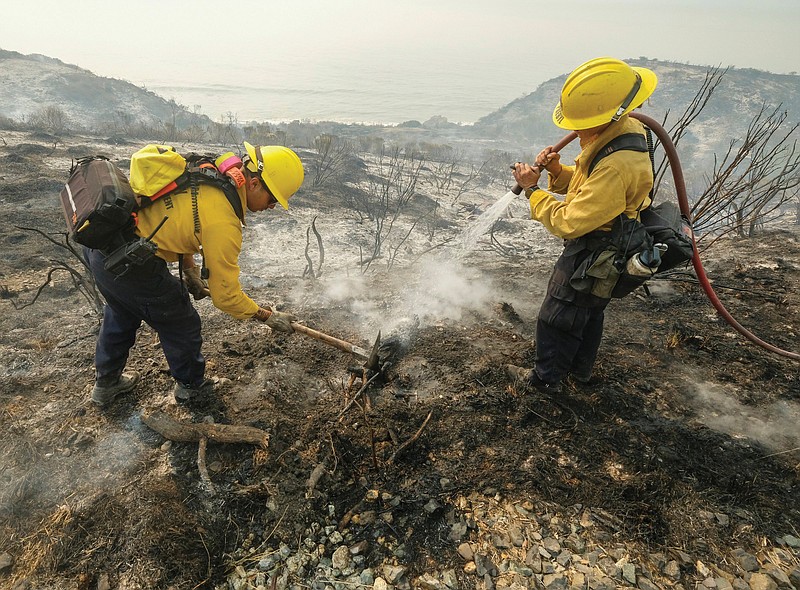 SANTA BARBARA, Calif. -- A wildfire raging through Southern California coastal mountains threatened ranches and rural homes, and kept a major highway shut down Wednesday as the fire-scarred state faced a new round of dry winds that raise the risk of infernos.

The Alisal Fire covered more than 24 square miles in the Santa Ynez Mountains west of Santa Barbara, and the number of firefighters was nearly doubled to 1,300, with more on the way. Containment remained at 5%.

While the scenic region along the Pacific shoreline is lightly populated, the blaze was a threat to more than 100 homes, ranches and other buildings, fire officials said.

Fire crews were protecting Rancho del Cielo, which was once owned by Ronald and Nancy Reagan, and was known as the Western White House during his presidency. Based on staff reports from the ranch, the fire was about a half-mile away late Wednesday morning, but that section of the blaze was not as active as others, said Jessica Jensen, vice president and chief of staff of the Young America's Foundation, which now operates the ranch.

The fire started Monday near the Alisal Reservoir, and winds from the north swept the flames down through the mountains, forcing the closure of U.S. 101 in western Santa Barbara County.

CHICAGO -- The head of the Chicago police officers union has called on its members to defy the city's requirement to report their covid-19 vaccination status by Friday or be placed on unpaid leave.

In the video posted online Tuesday and first reported on by the Chicago Sun-Times, Fraternal Order of Police President John Catanzara vowed to take Mayor Lori Lightfoot's administration to court if it tries to enforce the mandate, which requires city workers to report their vaccine status by the end of the workweek. After Friday, unvaccinated workers who won't submit to semiweekly coronavirus testing will be placed on unpaid leave.

"I do not believe the city has the authority to mandate that to anybody, let alone that information about your medical history," Catanzara said. He suggested that if the city does enforce its requirement and many union members refuse to comply with it, "It's safe to say that the city of Chicago will have a police force at 50% or less for this weekend coming up."

In response, Lightfoot on Wednesday accused Catanzara of spreading false information and dismissed most of his statements as "untrue or patently false." She said covid-19 vaccines are proven to be effective and that getting vaccinated would protect city workers and their families.

She said the city is prepared to deal with any fallout related to the vaccination requirement.

AUSTIN, Texas -- The U.S. Justice Department on Wednesday began an investigation into allegations of widespread mistreatment at Texas' embattled youth lockups, where at least 11 staffers have been arrested on sexual abuse charges in recent years.

The move by the Biden administration is the latest sign of trouble for the Texas Juvenile Justice Department, which for more than a decade has been beset by scandal, staff shakeups and investigations into allegations of abuse. Just last week, a former coach at a West Texas facility was arrested on charges alleging that he touched the breast of an 18-year-old in custody.

The announcement comes a year after advocates in Texas filed a complaint with federal investigators that outlined "grave problems" at the state's five youth lockups. Texas put more than 800 youths in state juvenile detention in 2019, which was more than any other state, according to an agency report published in September.

Texas will cooperate with the federal investigation, said Renae Eze, a spokeswoman for Republican Gov. Greg Abbott. In July, Abbott ordered a new investigation into the agency after reports of mistreatment by staff.

FLAGSTAFF, Ariz. -- A jury in Arizona has convicted a U.S. Air Force airman in the disappearance and death of a Mennonite woman who had been living in New Mexico.

Mark Gooch, 22, faces life in prison on the first-degree murder conviction after the jury reached its verdict Wednesday. He also was found guilty of kidnapping Sasha Krause in January 2020 from the Farmington Mennonite Church where she was gathering material for Sunday school.

Krause's body was found more than a month later, hundreds of miles away in a forest clearing outside Flagstaff, Ariz.

Jurors heard 10 days of testimony from those who knew Krause, investigated her disappearance and tried to track down who was responsible. They also heard from ballistics experts who disagreed on whether the bullet taken from her skull was fired from a .22-rifle caliber that Gooch owned.

Gooch had no expression during the trial or when the verdict was announced.

Sentencing has been set for Nov. 24.