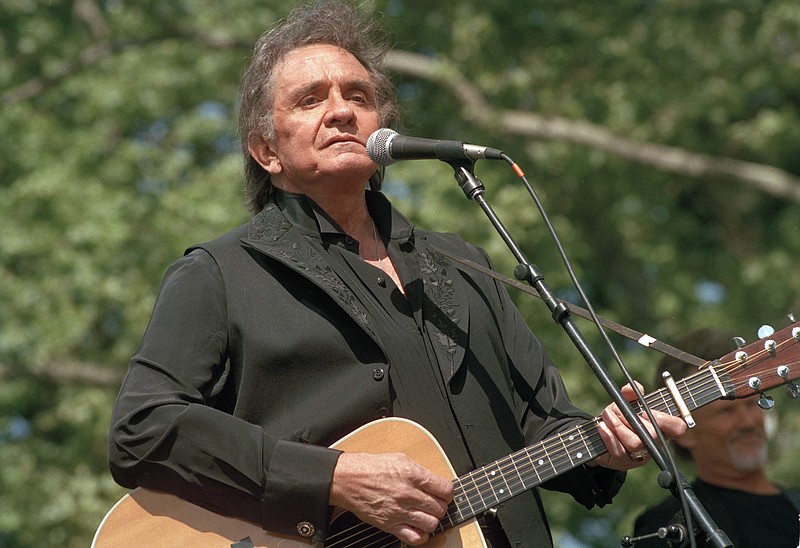 The 2021 Johnny Cash Heritage Festival offers a little something for everyone in its slate of virtual events, which organizers say is particularly apt considering the many layers and facets of The Man in Black.

The event (johnnycashheritage.us2.pathable.com) began Tuesday and runs through Saturday; it opens to the public Friday on the theme of social justice in Cash's life and music, and will feature musical performances, lectures and even a cooking demonstration of Cash's favorite cornbread recipe.

"We tried to look at [the theme] from several different angles," said Dr. Adam Long, executive director of Arkansas State University Heritage Sites. "We have speakers presenting on some of Cash's own social issues that he worked with, such as prison reform, most famously probably with the Folsom Prison concert."

"We're also looking at Cash's album 'Bitter Tears' which is about Native American rights and using that as a jumping-off point. We're looking at the Southern Tenant Farmers Union that was 15 miles away in Tyronza. We are looking at the story of Daisy Bates in Little Rock because she will be joining Johnny in National Statuary Hall representing Arkansas starting in 2022."

Since its inception, the Johnny Cash Heritage Festival has always underscored the strong influence Arkansas played in Cash's music and career. The 2021 event is no exception and will feature the debut of a new home-grown documentary, "Johnny Cash at Cummins" that dovetails Cash's penchant for speaking up for the disenfranchised with the broader themes of advocating for social change.

Even casual fans know of Cash's concerts for the incarcerated, the most famous of which happened at California's Folsom and San Quentin prisons. The former concert occurred in January 1968 and resulted in a live album later that year; the latter performance, in 1958, was actually the first high-profile prison concert, but didn't get released as a live album until 1969. Both records went to No. 1 and, along with "Bitter Tears," released in 1964, cemented the star's uncommonly direct voice for social consciousness in country music that played out for the rest of his career.

Cash's re-surging popularity and the tone of his songs caught the eye and ear of Gov. Winthrop Rockefeller, whose push for prison reform was an ongoing slog with the state Legislature, noted Ben Combs, retired founder of Combs & Company. The singer agreed to the April 1969 concert at Cummins Unit in Lincoln County as a way to support the governor's reform agenda.

Combs, who was then public affairs director of Little Rock ABC television affiliate KATV, proposed a special of the concert, to be videotaped in color.

"Johnny Cash was transformative when he started doing his prison albums and his prison concerts," Combs said. "Cummins and Tucker both were a national scandal at that time. I mean, they were in the news nationally. In the South, the farm systems were the way the prisons were run, because they were basically self-supporting; they used the trusty system to get free management, prisoners guarding prisoners."

According to the Encyclopedia of Arkansas, Cash played to a racially mixed audience of about 800 male and female inmates, along with an undercard that included June Carter and the Carter Family, Carl Perkins and the Statler Brothers. Cash was even given an honorary life sentence by prisoner Wade Eaves, editor of the uncensored Cummins paper the Pea Pickers Picayune.

Despite the historic implications of the event – Cash would only play an Arkansas prison once, and this was it – the concert was only broadcast statewide and had largely vanished from the general public's memory when Combs got the idea for a documentary a few years ago. For help, Combs approached his former KATV colleague Randall Dixon, now director of news archives and media for the David and Barbara Pryor Center for Oral and Visual History with the University of Arkansas.

"I went to Randy with the idea to do a documentary about Cash at Cummins probably five or six years ago," Combs said. "He and I had had several conversations over many years about Johnny Cash and Cummins and I told him we have got to find and restore the full 90-minute show. Because, I never took a copy with me, I'm sorry to say. It was KATV's property. I created it and I produced it, but it was their property so I never made a copy, nor did I ask for one."

When KATV donated its news archives to the Pryor Center for preservation and archiving, the duo saw the opportunity for their passion project had come at last. Combs, who remembers being a witness to history at the concert, said he's elated to revive the story through the roughly 45-minute documentary debuting at Cash's namesake festival.

"You can imagine the joy, the excitement that [the inmates] experienced, not ever dreaming while they were in prison that they would have a chance to do something like that," he said. "We understood that day, not to the extent that we do now, that history was in the making. I did not realize that that would be his only appearance at an Arkansas prison, which gives it even more significance."

"I am so happy. As a matter of fact, I'm relieved really, that we're finally going to get the story told in a documentary form so that how it happened, things that happened that day, the retrospective of how significant it was is now going to be preserved. I am just elated that the Pryor Center and ASU and Rosanne Cash are making this happen."

When: Noon Friday through 9 p.m. Saturday