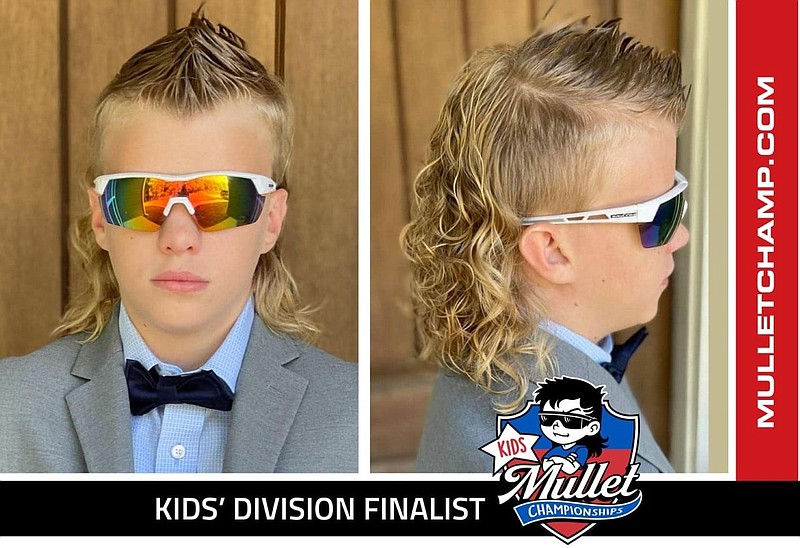 It all started with a mullet. And it ended with over $6,000 raised for children in foster care, and new friends for the Baltz family.

11-year-old Allan Baltz, of Jonesboro, was named the 2021 Mullet Champ in the kids' division.

His winnings of $2,500 will be donated and split between Project Zero, an organization that serves foster families throughout the state and Together We Foster, which focuses on families in Greene and Craighead counties, Lesli Baltz said.

Baltz said the family is grateful to watch the support and watch the community, state and others from out of state come together.

In the days leading up to the results of the competition, the family asked others to join them in donating to organizations supporting foster families.

Baltz said she’s received messages about a $250 donation out of Denver and a $500 donation from someone who said they were grateful for Allan’s story and it spurred them to give back, she said.

“His heart kind of changed their heart,” his mom added.

“People we don’t know have rallied around Allan, because his heart is so good – so beautiful,” Baltz said.

From the beginning, the family knew the competition was about more than just hair, Baltz said. With Allan’s story and heart, they thought it would inspire people to look into foster care and how they can help, because the need is so great, she said, as she began to cry.

For people who think they might not be able to handle fostering a child, Baltz said that in the beginning, she certainly didn’t believe she was ready for it. The family adopted Allan and his twin sister Alice when they were 4 years old.

“I certainly didn’t realize I was good enough or able at the beginning,” she said. “I think sometimes as moms we still wonder that. Every step is worth it and every challenge they overcome is just incredible.”

But, fostering is not the only way to provide support. Baltz said donating time to a clothing closet is helpful, as is donating items or funds to an organization.

If you know a foster family, she suggests showing support by providing a meal to them from time to time, getting them a gift card, or offering to watch their kids so that they can have a date night or a night off.

“Anything to show that family you are supporting them, means the world to foster families,” she said.

Baltz said she was surprised that Kaleigha Cramer, mom of runner up Ezra Cramer, of Arab, Alabama, reached out to her to donate to one of their charities of choice.

Kaleigha said she explained to Ezra that Allan had a similar story that her brother did. Her brother was adopted, though never went through the foster care system.

She told Ezra it was their job to support foster families and the programs that support them, and he agreed.

In return, the Baltz family donated to Stomp Out Bullying, anti-bullying campaign chosen by the Cramer family.

"When Lesli expressed that she wanted to support “Shake the Hate,” I was just floored," said Kaleigha.

"I immediately burst into tears because I had no idea who these amazing people were, just like she didn’t know us — but we both have two commonalities; precious boys with big hearts and wanting to change this world for the better," she said.

Baltz expressed her excitement over the new people the family has been able to connect with over the mullet and the experience.

During their family trip to Florida over Thanksgiving break, they are hoping to make a pit stop in Alabama and meet the Cramer family in person.

“We think the world of them and we haven’t even met them yet,” she said.