Proposal to FDA for people 65 and older or at high risk by Compiled Democrat-Gazette Staff From Wire Reports | October 15, 2021 at 7:15 a.m. 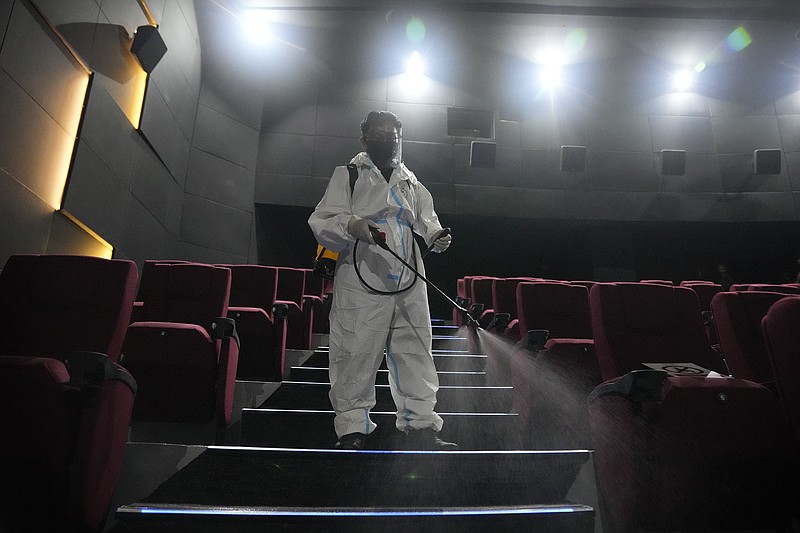 A worker sanitizes a movie house Thursday in Quezon City, Philippines, in preparation for reopening as government restrictions are being eased after a decline in covid-19 cases in that country. (AP/Aaron Favila)

WASHINGTON -- An independent advisory panel to the Food and Drug Administration on Thursday unanimously recommended a booster dose of the Moderna coronavirus vaccine for people 65 and older and for adults who are at high risk of severe illness because of underlying conditions or exposure on the job.

The recommendation mirrors the eligibility criteria for the Pfizer-BioNTech booster, which was authorized in September. Nearly 70 million Americans have been fully vaccinated with the Moderna vaccine, and millions of them would be eligible for a follow-up dose six months after vaccination if the agency authorizes the extra shot, which would be half the dose initially given.

The recommendation will now be considered by FDA officials, who are expected to reach a decision on the Moderna booster within days. An advisory committee to the Centers for Disease Control and Prevention that makes recommendations on how vaccines should be used is scheduled to meet Wednesday.

Boosters are a key part of the Biden administration's plan to manage the pandemic, and the outside advisers agreed they are an important tool for select groups of people.

Some health experts have argued that there is not enough evidence to justify administering boosters to certain populations, especially younger, healthier people who, if they become infected, are likely to have asymptomatic or mild infections. But several Biden health officials believe it is important to reduce cases in vaccinated people, even if they do not result in hospitalization, to bring down the overall caseload.

[Video not showing up above? Click here to watch » arkansasonline.com/1015booster/]

At the start of Thursday's advisory committee meeting, Peter Marks, director of the FDA's Center for Biologics Evaluation and Research, outlined the potential rationale for boosters.

He said all three of the vaccines available in the United States remain highly protective against severe outcomes, but added that even milder cases may warrant prevention.

"Vaccine effectiveness against mild and moderate disease does appear to wane over time for the different vaccines, and we do need to account for the fact that mild to moderate covid-19 can be associated with adverse outcomes, such as blood clots and long covid-19, even in those who have breakthrough infections after vaccination," Marks said.

Several of the advisers pushed back on the notion that extra shots are needed for all Americans and said they worried the emphasis on boosters could distract from the potential of standard vaccine regimens to end the pandemic, which has killed more than 720,000 people in the United States.

"The effect of a booster is much less than vaccinating unvaccinated individuals -- that means both here and abroad," said Eric Rubin, editor of the New England Journal of Medicine and a member of the advisory committee. "If we want to get out of this thing, we've got to vaccinate the unvaccinated."

The vote to recommend boosters for older adults and people at risk because of underlying health conditions or exposures at their jobs came after a full-day examination of data on the safety and effectiveness of a booster. Several experts noted there was only minimal safety data. Moderna presented studies of about 350 people who were given a booster dose six months after their initial shots.

While the committee gave a thumbs up to boosters for some people, a separate discussion about whether people as young as 18 should be eligible for an extra dose triggered objections from several members.

"I'm not convinced that the epidemiology of the pandemic at the moment in the U.S. supports this request," said Archana Chatterjee, dean of the Chicago Medical School.

Some outside experts criticized the discussion as shortsighted and warned that cases could climb again, as they have several times throughout the pandemic.

"You can't just say it's getting better. The surge is coming down just like the surge came down last winter and last summer. That's a shortsighted discussion," said Michael Osterholm, director of the Center for Infectious Disease Research and Policy at the University of Minnesota. "I'm incredibly doubtful this is our last surge, and I think some geographic areas are going to get hit again."

The committee's acting chairman, Arnold Monto, said he hoped a framework could be developed to determine if a booster is warranted in younger age groups going forward -- and to better understand the potential benefits and risk.

"The concern that I have is that we don't want to wait until we see some more severe infections in the under 65-year-old general population, because getting this vaccine out takes time and requires extreme logistic efforts," said Monto, a professor of public health and epidemiology at the University of Michigan.

A half-dose booster at least six months after initial vaccination restored those antibodies in a study of nearly 300 people.

Miller also presented data on breakthrough cases among people in the clinical trial of the company's vaccine, which began in summer 2020. Among those vaccine recipients, there was a clear uptick in breakthrough infections this July and August.

"Prior to July, the maximum number of cases reported in [vaccinated individuals] in a single month was 23," Miller said. "This increased to 81 cases in July and 169 cases in August, with 97% of these cases due to the delta variant."

A Moderna analysis showed that protection against infections appears to diminish over time. People vaccinated earlier in the large clinical trial were more likely to have breakthrough cases this July and August compared with the group that received the placebo in the trial and thus were vaccinated more recently.

Moderna said it chose the lower-dose booster because it triggered fewer uncomfortable shot reactions such as fever and muscle aches but also leaves more vaccine available for the global supply.

One very rare side effect of both the Moderna and Pfizer vaccines is heart inflammation, particularly among young men soon after the second dose -- and one lingering question is whether another dose could spark more cases. Moderna's booster study wasn't large enough to spot such a rare risk.

Today, the same committee will meet at an all-day meeting to make a recommendation about a possible booster dose of the Johnson & Johnson vaccine.

It will also review data from a National Institutes of Health trial that tested whether mixing and matching booster doses from different companies was feasible. If the committee deems it safe for a person to receive a different booster than their primary vaccination, it could simplify logistics.

Meanwhile, the FDA said Thursday that it will ask its outside experts to meet in late November to scrutinize Merck's pill to treat covid-19.

The Nov. 30 meeting means U.S. regulators probably won't issue a decision on the drug until December, signaling that the agency will conduct a detailed review of the experimental treatment's safety and effectiveness. The panelists are likely to vote on whether Merck's drug should be approved, though the FDA is not required to follow their advice.

It marks the first time the FDA has convened its expert advisers before ruling on a coronavirus treatment. Advisory committee meetings have become a standard part of its process for reviewing vaccines.

The agency decided to convene the meeting to help inform its decision-making, its top drug regulator said in a statement.

"We believe that, in this instance, a public discussion of these data with the agency's advisory committee will help ensure clear understanding of the scientific data and information that the FDA is evaluating," said Dr. Patrizia Cavazzoni, director of FDA's drug center.

The FDA said the meeting was scheduled as soon as possible after Merck's request. The November date will allow agency scientists to review the application ahead of the meeting, the agency said.

Merck and its partner Ridgeback Biotherapeutic filed their FDA application on Monday, asking the agency to grant emergency use for adults with mild to moderate covid-19 who are at risk for severe disease or hospitalization. That is roughly the same indication as available infusion drugs.

Three IV antibody drugs have been authorized since last year to cut covid-19 hospitalization and death, but they are expensive, hard to produce and require specialty equipment and health professionals to deliver. If authorized, Merck's drug, molnupiravir, would be the first that patients could take at home to ease symptoms and speed recovery.

The company announced preliminary results earlier this month showing its drug cut hospitalizations and deaths by half among patients with early covid-19 symptoms. The results have not yet been peer-reviewed, the standard practice for vetting such research.

The company also has not disclosed details on molnupiravir's side effects, except to say that rates of those problems were similar between people who got the drug and those who received dummy pills.

If authorized, Merck's drug is likely to be the first -- but not the only -- pill to treat covid-19. Pfizer, Roche and Appili Therapeutics are each studying similar drugs and are expected to report results in the coming weeks and months.

Information for this article was contributed by Carolyn Y. Johnson and Yasmeen Abutaleb of The Washington Post; and by Lauran Neergaard and Matthew Perrone of The Associated Press.