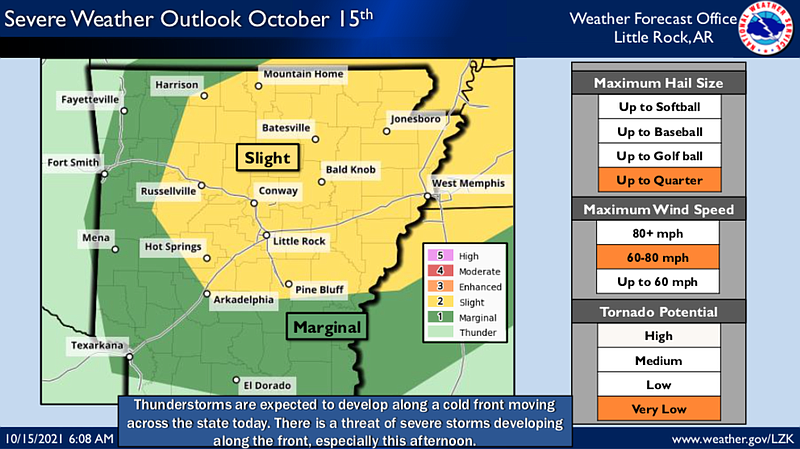 A strong cold front moving across the southeast portions of the state led to a thunderstorm watch for parts of Arkansas on Friday, according to the National Weather Service.

A severe thunderstorm warning is in effect for parts of Central Arkansas until 2 p.m., bringing a chance for wind gusts of up to 60 mph and large hail, according to the weather service.

The eastern two-thirds of the state are the most likely to see severe storms Friday, according to a Friday morning brief from the National Weather Service.

Damaging winds of up to 80 mph will be the primary threat, while people may also see large hail, forecasters said. Isolated tornadoes “cannot be ruled out,” according to the weather service.

Storms are predicted to develop in northern and western portions of the state through early afternoon, building into central and eastern areas as the afternoon progresses, according to a Twitter post from the National Weather Service.

Thunderstorms are predicted to dissipate behind the cold front as drier and cooler air undercut the storms, which will bring cooler air statewide, according to the briefing.

Extreme-Northwest Arkansas may see up to 2 inches of rain, while the southeast half of the state may see as little as less than half an inch, forecasters said.