Defense of the run: Load doesn’t get easier for the Hogs 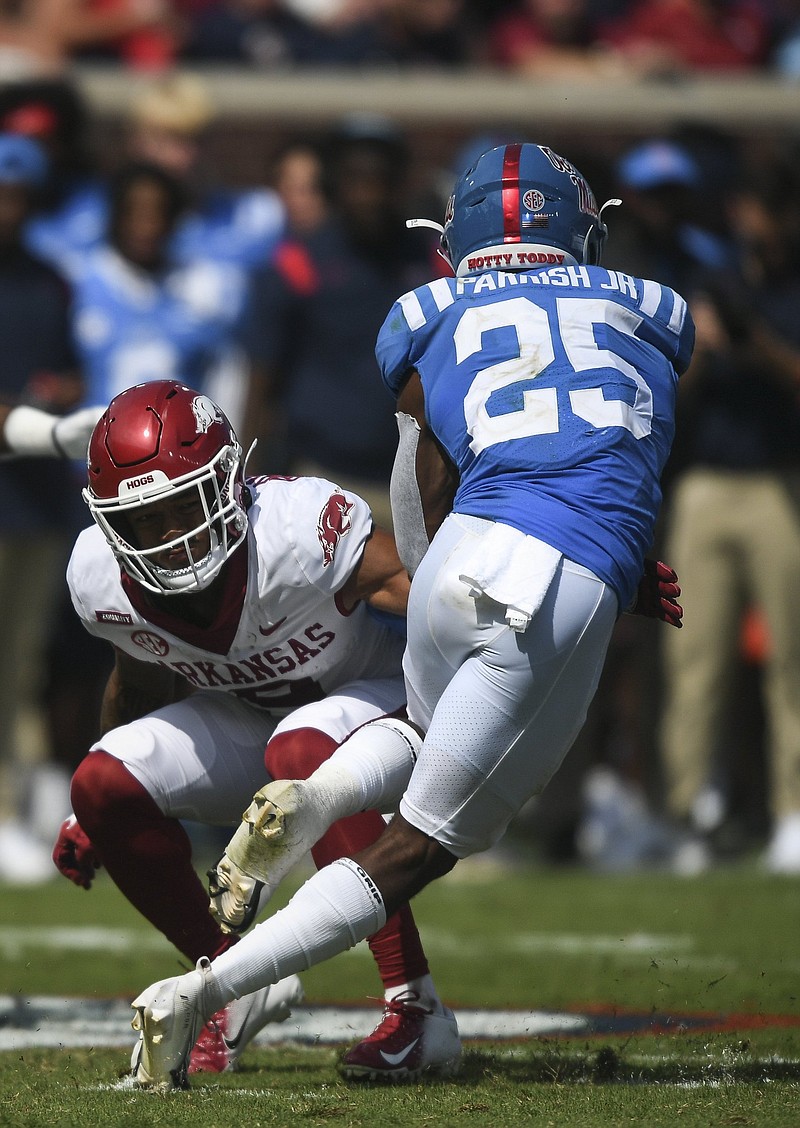 FAYETTEVILLE — The Arkansas Razorbacks can see it coming.

After the University of Arkansas defense allowed nearly 600 rushing yards in its past two games, the No. 17 Razorbacks (4-2, 1-2 SEC) see Auburn (4-2, 1-1) coming to town on Saturday with a strong urge to lean on its running game.

“There’s a bunch of things we have to get fixed,” Arkansas Coach Sam Pittman said of the defense after allowing 611 yards, including 324 on the ground, in a 52-51 loss at Ole Miss on Saturday.

One contributing factor to the recent play: The Razorbacks have been dealing with injuries on multiple levels of their defense, including safety Jalen Catalon, who has played with a broken hand for a few weeks and whose availability for Saturday is doubtful after injuring his collarbone at Ole Miss.

Auburn has leaned heavily on the passing attack led by quarterbacks Bo Nix and TJ Finley in its two SEC games against LSU and Georgia while playing a lot of catchup. The Tigers would rather set Tank Bigsby, Jarquez Hunter and Shaun Shivers loose on the Razorbacks behind their massive front and let Nix scramble for yardage.

“We’ve been trying to do that every single week, and that’s something I think most teams want to do,” Auburn Coach Bryan Harsin said. “They want to establish the run. We’d like to do that. We’d like to run the football.”

Auburn can look back to its 30-28 win over Arkansas in the rain last year to see opportunities on the ground.

Then-freshman Bigsby ran for 146 yards on 20 carries to trigger a 259-yard rushing effort by the Tigers.

“I can just remember from rewatching the game as well as from last year, we just couldn’t get him on the ground,” Pittman said. “He has those big, strong, powerful legs. And he’s just special. I don’t know him personally, but he’s special. We’re going to have to get more than one guy around him, and that’s hard to do because their line is playing so well.” The backs run behind one of the biggest lines in the country that returns four starters, with seniors like 6-7, 305-pound left tackle Austin Troxell, 6-4, 335-pound left guard Brandon Council and 6-6, 334-pound right tackle Brodarious Hamm. The heaviest starter is 345-pound sophomore guard Keiondre Jones.

“They’re real big,” Arkansas linebacker Grant Morgan said. “They’re physical. They like to run downhill, like to be able to be powerful and be able to show you they’re physical. … They have athletes all around. Bigsby’s probably one of the best backs in our league.” Pittman said the Tigers are a big inside zone team.

“Really, they’re hitting it straight downhill,” Pittman said. “A lot of cutback on that inside zone and basically they’re letting Bigsby and Hunter and Shivers … get their shoulders square and hit it. They’re hard to stop for less than four or five yards when they get to that point.” Arkansas slowed the run well with its three-man defensive front early this season, shooting linebackers and defensive backs into gaps and tackling relatively well in wins over Rice, Texas, Georgia Southern and Texas A&M.

Those four teams managed 492 yards on 138 carries, an average of 3.6 yards per carry against the Razorbacks. Take out Georgia Southern quarterback Josh Tomlin’s 76-yard touchdown on a keeper and the average is 3.03 yards per run play in September for Arkansas opponents.

Those are paltry numbers compared to the damage Georgia and Ole Miss did. The Bulldogs and Rebels combined for 101 carries for 597 yards and 8 touchdowns, and an average of 5.9 yards per carry.

“At times they were cutting us off on the backside and we couldn’t get an extra hat to the ball and it was creating some problems for us. We made some corrections to try to get it fixed, but it was great play design. Props to them for that.” Nickel back Greg Brooks Jr., said the Razorbacks recently are “just not playing our brand of football.

“It’s just balling and going back to the way we play: Physical and fast. So that game is in the past. We’re not really worried about it anymore. We’re just worried about Auburn this week.” Struggling to tackle quarterback Matt Corral, who had 94 rushing yards, in turn gave Snoop Conner and Henry Parrish Jr. opportunities to run for 100 yards each. Conner had touchdown runs of 51, 34 and 1 yard.

“We couldn’t get Corral on the ground, and our secondary support was poor,” Pittman said. “Therefore, that’s why you saw a lot of B-gap runs go to the house. We couldn’t get the edge. We let the edge go a lot on defense, and we busted several coverages.” After four weeks, Arkansas ranked 48th in the country in rushing defense, allowing 121 yards per game. The Razorbacks will face Auburn ranked 100th in the same category, now permitting 181.7 yards per game.

Arkansas had solid run defense numbers through the first month of the season,

down the rush defense rankings.