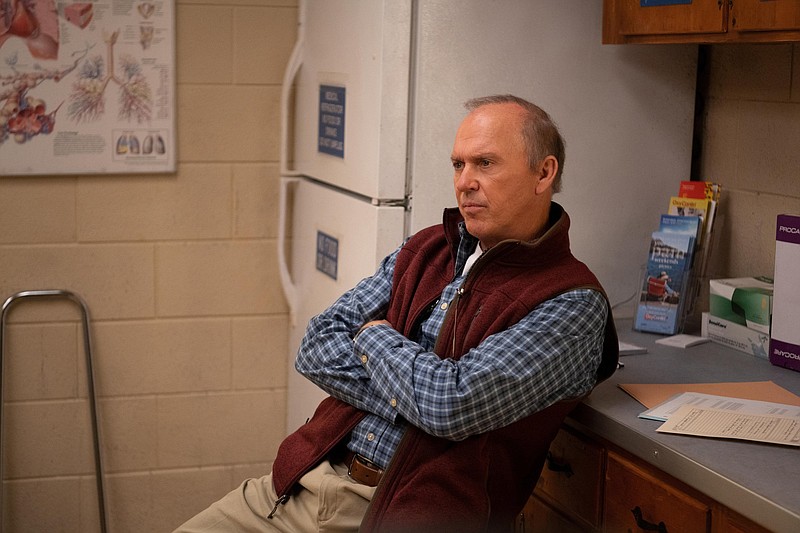 Watching the new Hulu miniseries "Dopesick" has been an unnerving experience for me because, like the addicts on screen, my doctors prescribed me opiates last year when I broke my femur. Perhaps because my injury was more recent, my doctors carefully limited my doses, and I stopped taking the drugs once I got home. I'm now back on my feet, but watching others lose everything they had to OxyContin filled me with rage and sorrow.

When I admitted my experiences to Mexican director Patricia Riggen in a telephone interview, who helmed episodes five and six of the eight-part adaptation of former journalist Beth Macy's bestselling book, she asked me in a loud voice over Google, "Dan, have you had the opportunity of seeing the episodes?

"I wouldn't touch those pills for anything. You know, it's so scary."

Riggen has been making films since her debut short "The Cornfield" in 2002, but working on "Dopesick," which chronicles how Purdue Pharma made countless sums getting people in Appalachia hooked on OxyContin, has been more than an assignment for her.

In a recent interview in The Hollywood Reporter, star Michael Keaton ("Batman," "Spotlight") recounted losing a nephew to an overdose of fentanyl and heroin. Riggen added, "When I started doing my research and preparing for the show, I found out that part of my family is American. I found out they have personally been affected by this drug. Every person that we had in the crew, every cast member had a personal connection to the drug. In the auditions, they asked what was their connection to the drug, and it was heartbreaking. They'd talk about a son, a daughter. It was brutal."

Purdue initially sold OxyContin as a safe way to relieve chronic pain, but as the book and series recount, their aggressive marketing campaign misrepresented how addictive the drug really was. OxyContin pills had a time-release coating that was supposed to delay the full potency of the drug to prevent abuse.

As Keaton's character Dr. Samuel Finnix demonstrates in one of Riggen's episodes, that covering could be dissolved using an extremely common chemical called saliva.

Because the Sackler family who owned Purdue were already wealthy from having pioneered medical marketing with drugs like Valium, it was probably tempting for Riggen and series creator Danny Strong ("Empire," "The Hunger Games: Mockingjay") to demonize former Purdue chairman and president Dr. Richard Sackler, but Riggen insists she and actor Michael Stuhlbarg ("A Serious Man," "Boardwalk Empire") tried a different approach.

In addition to emphasizing Sackler's single-minded campaign for OxyContin despite its potential hazards, the series also depicts his disputes and insecurities around other people who share his last name because they sometimes view him as an interloper and not worthy of the clan's storied legacy. They were known for philanthropy before OxyContin started making them pariahs.

"I thought what Danny did was very smart in allowing us to see inside the guy. Michael is so talented and so interesting to watch and such a pleasure to work with. I think he created one of the most enigmatic villains that I have seen in a long time," she said.

When asked if Sackler might have been motivated by a misguided belief in his product as well as Purdue's bottom line, she paused and added, "When it comes to that kind of money, that's the reigning principle, making money."

The fact that OxyContin came from doctors and pharmacists is especially troubling for the director. "You're getting addicted in your doctor's office where you're more vulnerable, open and trusting, and it's part of the whole heroin thing again, which we thought was contained," she laments.

If "Dopesick," which was shot in Beth Macy's Virginia, recounts how gaps in our health system have led to an epidemic of drug dependency, Riggen recalls that the series required the cast and crew to take additional precautions to avoid getting ill making it.

"This was probably one of the very first shows that got on its feet during the pandemic. We shot it before the vaccine. It was like an experiment in how to keep safe. We were wearing masks. We were wearing [face] shields. We had these big air conditioning units installed in every single set. They were extremely noisy. I remember [director] Barry Levinson's ['Diner,' 'Rain Man'] glasses fogged under the shield. We couldn't remove it," she recalled.

Riggen first came to prominence for directing "Under the Same Moon," in which Adrian Alonso plays a boy who crosses the Mexican border to be reunited with his mother (Kate del Castillo, "Queen of the South") in the United States. The movie set box office records for a Spanish-language film. She's also responsible for "The 33," which recounts how a group of Chilean miners survived for 69 days being trapped underground.

"Dopesick" is a return to mining country for Riggen.

"I found myself, like oh, my God, I'm going to be dealing with miners. I even took my hardhat to the shoot, but I didn't get to go into a mine this time around."

She had no trouble telling stories about issues with the immigration system or dealing with both Chilean miners and their white, American counterparts.

In addition, Riggen won a Short Filmmaking Award at Sundance in 2005 for her documentary "Family Portrait," which recounted a 1968 Life Magazine photo essay Gordon Parks (who also directed "Shaft" and "The Learning Tree") shot about the Fontanelle family.

When Riggen made the film, Richard Fontanelle was the handyman in her New York apartment and was getting ready to attend an exhibit of the photos Parks took of Fontanelle's family in wake of riots in Harlem.

"It just so happened that everyone in the pictures -- there were eight kids and the parents -- everyone was dead, except for Richard who was 3 years old when he was photographed. How can this happen in the richest country in the world in one of the richest cities in the world? For me, it was really an exploration of what it was to be Black."