The nation in brief: Estimates scaled back on oil-spill size 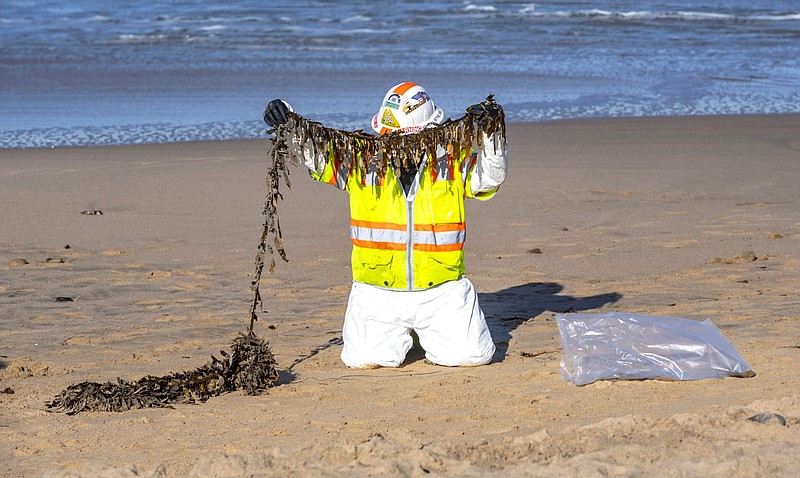 Estimates scaled back on oil-spill size

HUNTINGTON BEACH, Calif. -- The amount of crude oil spilled in an offshore pipeline leak in Southern California is believed to be close to 25,000 gallons, or about one-fifth of what officials initially feared, a Coast Guard official said Thursday.

The spill off Huntington Beach was confirmed on Oct. 2, a day after residents reported a petroleum smell in the area. The shorelines in Huntington Beach, which is known as "Surf City USA," and neighboring Newport Beach were shut down until Monday.

While the leak off the coast of Orange County was previously estimated to be between 25,000 gallons and 132,000 gallons, the final count for the spill will likely be closer to the lower figure, which correlates with the amount of oil seen on the California shore, Coast Guard Capt. Rebecca Ore said Thursday.

Coast Guard officials said the oil came from a leak in a pipeline owned by Houston-based Amplify Energy that shuttles crude from offshore platforms to the coast. Officials said the cause of the leak remains under investigation, but the pipeline was likely damaged by a ship's anchor several months to a year before it ruptured.

Workers in protective gear continue to comb the sand for tar balls washing ashore along more than 70 miles of coastline in Orange and San Diego counties.

LANSING, Mich. -- Gov. Gretchen Whitmer on Thursday ordered a "whole-of-government" response to elevated levels of lead in tap water in the southwestern Michigan city of Benton Harbor and vowed to accelerate the replacement of its lead pipes.

Her directive that state agencies ensure Benton Harbor residents have safe tap water came about a week after her administration -- amid criticism of state and local officials' handling of the response -- urged people to use only bottled water for cooking and drinking.

The Democratic governor also committed to replacing lead pipes within 18 months, accelerating what had been a five-year timeline. Her order also mandates that residents receive free or low-cost lead-related services, including health care.

Benton Harbor is a predominantly Black and mostly low-income community of 9,700, about 100 miles from Chicago.

"This is what we've been waiting for -- an 'all-hands-on-deck' approach to fix the lead contamination crisis in Benton Harbor," the Rev. Edward Pinkney, president of the Benton Harbor Community Water Council, said in a written statement.

NEW YORK -- A teenager who last month pleaded guilty to murder in the killing of an 18-year-old Barnard student was sentenced Thursday to nine years to life in prison.

The teenager, Luchiano Lewis, 16, said he and two friends had gone to Harlem's Morningside Park in December 2019 with the goal of robbing someone. The group settled on Tessa Majors, Lewis said, describing a violent attack on the student that culminated in her death by stabbing.

At the time, Lewis was 14. He and one other member of the group, Rashaun Weaver, were charged as adults. Weaver, who Lewis last month said had stabbed Majors, has pleaded innocent. His trial date is expected to be set early next week.

The third member of their group was 13 at the time of the killing and confessed to his involvement the day after the crime.

Lewis was arrested in February 2020, accused of having restrained Majors, preventing her escape. He initially pleaded innocent but changed his plea before delivering a lengthy statement that detailed the attack. However, he said he did not know Majors had been stabbed, let alone killed, until the next morning when he saw a news story about it.

WASHINGTON -- Climate protesters attempted to occupy the Department of the Interior on Thursday, with dozens holding a sit-in inside as those remaining outside clashed with the police who were blocking the entrance.

Protesters and security personnel were injured as climate activists crowded an entrance to the Stewart Lee Udall Main Interior Building on Northwest C Street. Melissa Schwartz, a department spokesperson, said in a statement that security personnel suffered "multiple injuries," and one officer was transported to a hospital.

Protesters outside attempted to push past the police line blocking the one doorway that was not locked. Police and protesters shoved one another, and at one point, officers used Tasers, injuring protesters who were not armed, some protesters said.

Protesters said they wanted to speak with Deb Haaland, the secretary of the Interior Department and the first American Indian to hold the position. Haaland was traveling and not in Washington during this time, Schwartz said in a statement.

Jennifer Falcon, an Indigenous Environmental Network spokesperson, tweeted from inside the building that police were arresting the protesters. 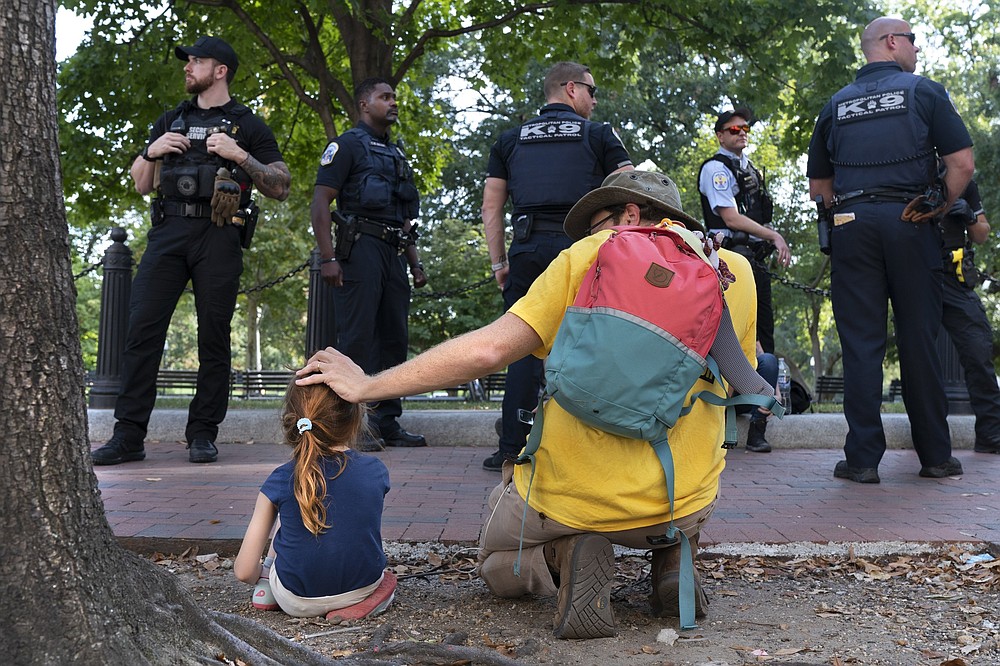 A father and daughter watch as a family friend is arrested during a climate protest Thursday in Washington, D.C. (AP/Jacquelyn Martin)