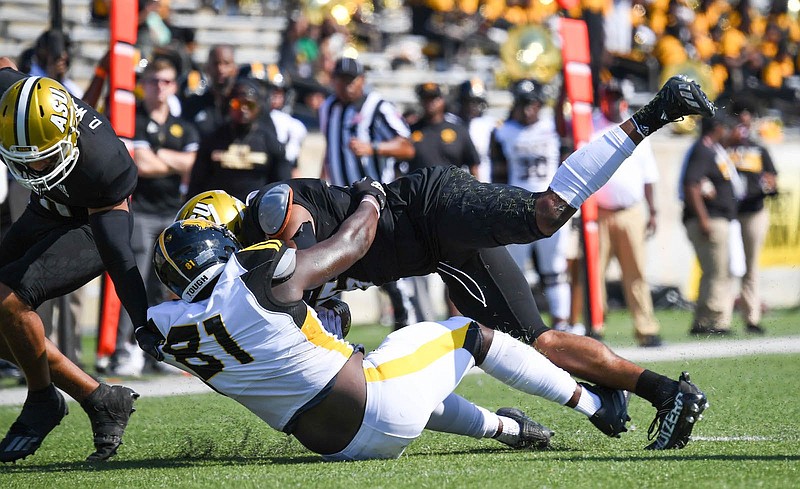 UAPB tight end Rashad Beecham (81) makes a tackle after a fumble against Alabama State on Saturday, October 9, 2021. (Special to The Commercial/Brian Tannehill)

It's been quite often that Doc Gamble has said "We didn't get it done" during Southwestern Athletic Conference coaches' Zoom conferences. For more than a month, Gamble's University of Arkansas at Pine Bluff football team has gone without a victory.

While the Golden Lions (1-4, 0-3 SWAC) find themselves out of the championship hunt just five months after playing in a spring conference final, they still have six games left to win five to secure a third-straight winning record.

A big reason for the Lions' woes, as Gamble mentioned in the days following a Sept. 30 loss at Prairie View A&M University, was not playing "clean football."

"We're looking and searching for ways and answers, trying to find solutions for when we start fast, then once we start fast we finish," Gamble said.

Except UAPB started anything but fast last Saturday at Alabama State University. The Lions' first three offensive plays were 1-yard loss, 1-yard gain and lost fumble, an ominous sign as they fell behind 14-0 and lost 35-15.

"We're making mistakes in every phase of the game right now and we're not able to overcome making those mistakes," he said, two days after hinting at a closer evaluation at quarterback between starter Skyler Perry and top backup Xzavier Vaughn.

But the second-year head coach -- who now has a 5-5 career record -- didn't point the finger at just one player or one position for the team's woes.

"Everybody is taking their turn in making critical mistakes, and we've not been able to bounce back from them," Gamble said. "That's everybody in the organization. Everybody's taking their turn to make a mistake and right now we're not hitting on all cylinders because of that. But we've got to keep chopping wood, we've got to get back at it and keep preparing, and keep pointing out things we've got to do and get corrected. The little things can't keep showing up, and those are the things that keep hindering us."

Those little things allowed Alabama State freshman Myles Crawley to throw for 292 yards and four touchdown passes in his first start, further torturing a UAPB defense that has allowed the eighth-most total yardage per game in the SWAC at 421.6 and ranks last in pass defense at 291.6 yards.

All-American return specialist and receiver Tyrin Ralph has played in only two games this season, but not since catching six passes for 44 yards in Alcorn State University's come-from-behind win Sept. 23.

"He had to get an emergency oral surgery," Gamble said. "We're just waiting to see how fast, how well he heals. Soon as he heals and he's given the OK, we'll be ready to play."

UAPB is celebrating homecoming this week. Although Ladarius Skelton is returning home as Southern University's quarterback, it is unlikely the 2016 Pine Bluff High School graduate will be back at the controls of the offense come kickoff at 2 p.m. Saturday, set to stream on ESPN+.

Southern interim Coach Jason Rollins said over Zoom that Skelton -- a 6-foot-2, 210-pound redshirt senior who won two state championships (2014-15) at PBHS -- has been saddled with a bone bruise on one of his knees and hasn't played since Sept. 18, when completed 14 of 21 passes for 207 yards and three touchdowns with an interception in a loss to McNeese State University. Skelton went seven for 11 passes for 85 yards with two picks in the Sept. 4 opener against Troy University.

"Right now, with Ladarius Skelton, everything is dependent on his health," Rollins said "He hasn't been healthy since the first game of the season. How healthy he is depends on how much he plays and how much he's a part of the game plan going forward."

Glendon McDaniel has taken the majority of the snaps this season for the Jaguars (2-3, 1-1). The redshirt junior is 48 for 72 passes completed for 586 yards and six touchdowns with an interception.

"Right now, we're excited about what Glendon McDaniel brings to the table," Rollins said. "He played a very good game this past Saturday, he's steady, he has the trust of the team and he has a good grasp of our offense."

McDaniel completed 20 of 29 for 207 yards in a 35-31 loss last Saturday to Texas Southern University in Arlington.

The Jaguars have alternated losses and wins throughout this season.

• What: Homecoming game for Golden Lions 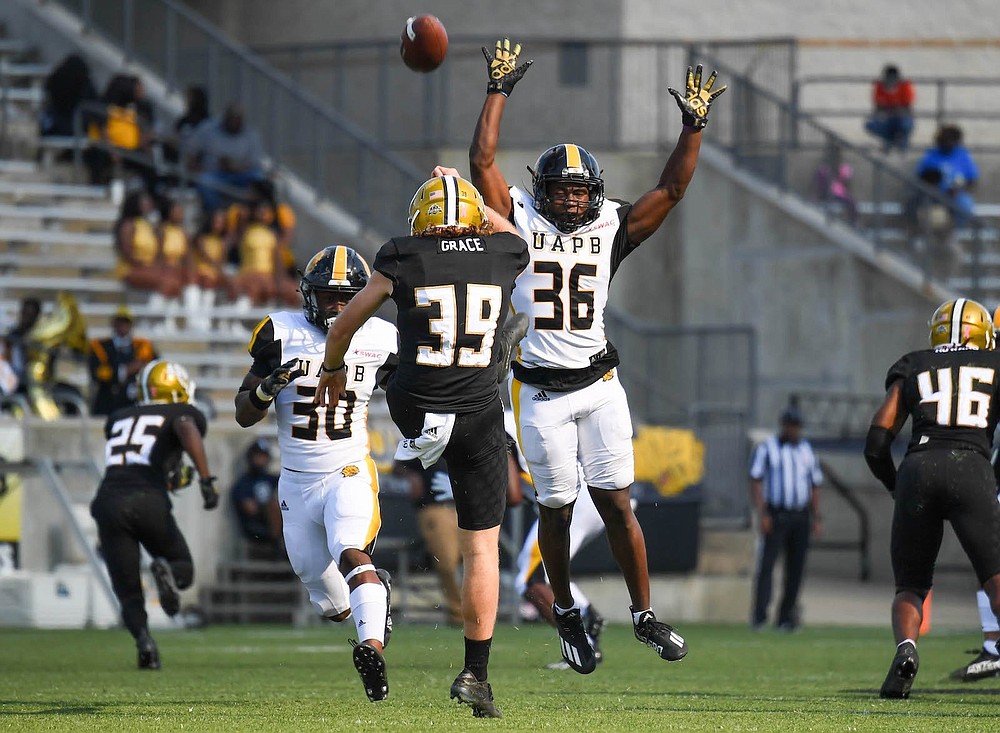