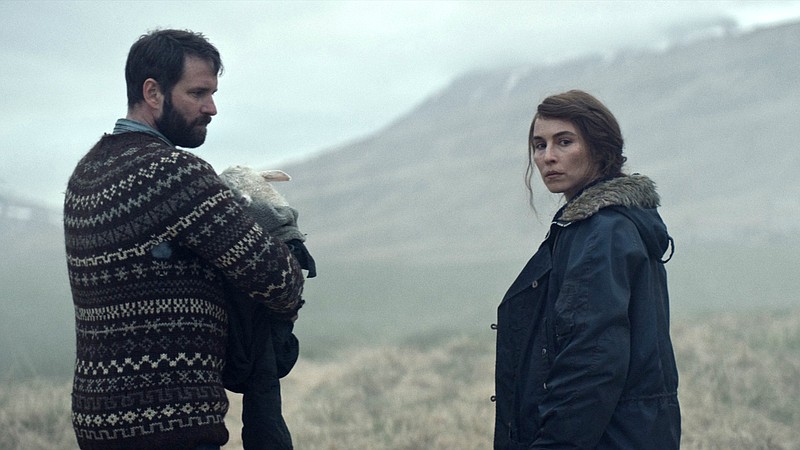 Valdimar Johannsson's off-kilter folktale "Lamb" is very much landed in visceral reality. Set on an Icelandic sheep farm somewhere in the mountains, time and attention are paid to the day-to-day grounded detail of the farm, and its occupants -- the many sheep and lambs who live within its stalls, and the wife, Maria (Noomi Rapace), and husband Ingvar (Hilmir Snaer Gudnason) who tend to them.

This attention to realism plays well off the menace that seems to be all around them -- the film begins on a nearly white-out winter night, from the point of view of an unseen malevolence, breathing in ragged rasps as it approaches the sheep barn -- in a way that connects it to a very recognizable reality, a similar sort of trick pulled off by Robert Eggers' haunting classic, "The Witch."

On the farm, Johannsson anchors the action in the decidedly corporeal, from the mud and dust of the landscape, with its stunning mountain vista as a constant backdrop, and the grind of activities that the couple have to regularly attend. Tractors are driven, hay is dispensed, activity is a constant swirl, as Maria and Ingvar trade off shifts, and sleep in the light-dusk atmosphere of northern Iceland.

The first 15 minutes of the film are very nearly wordless, Johannsson allowing the lyrically spare imagery of Eli Arenson's camera to establish the mood, in a series of beautifully composed medium and close-up shots, with particular attention spent on the stoic miens of the farm's various animals (much is made of the expressions, and lack thereof, from the family cat, ensconced in the house, peering out the windows, as their border collie -- known only as "dog"-- races around the farm, happy to be of service). In this way, the faces of these animals, with special attention paid to the sheep themselves, are given similar weight to the human characters, an element that works perfectly to the thematic power of the ending.

From that snowy opening, we then take a slight jump some months ahead, to the springtime, when lambs are being born (shown directly, in their slick, viscous glory), to the pride of the farming couple. But when one particular lamb is born, mostly off-camera, something appears to arrest their attention. Wordlessly, they scoop her up, and wrap her in a blanket, keeping her in the house with them, in a crib, and cared for tenderly, as if she were their own.

We are to understand, obliquely at first, that the couple have endured some series of tragedies in the process of having their own children, so, from the start, our assumption is this particular lamb has somehow fit in as a substitute baby, a proxy to shunt their grief. Sometime later in the film, it's revealed what it is about this particular lamb, whom they name Ada, that has led to this reaction, laying more of the film's intentions bare. Despite the mother lamb hovering outside the window of their house, bleating plaintively for her child to be returned to her, Ada is raised as their own, raising the spirits of the couple (later, Ingvar describes the situation as "happiness") in the process.

Complications arrive when Ingvar's scoundrel of a brother, Petur (Bjorn Hlynur Haraldsson), shows up one morning, hung over, and broke, both because he at first questions his brother's sanity over Ada, and because he still harbors romantic feelings for Maria, whom, we are led to believe, has indulged him in the past. Still, Petur's presence, and the ripples of discomfort he instills into their lives, becomes a bit of a boondoggle to the real issues at hand, involving the return of the malevolent presence of the film's opening (appearing at first, in a particularly arresting shot, reflecting faintly in Ada's eye), as everything builds to a reverberating crescendo.

As with many such folktales, the film reliably follows its own internal logic, combining the fantastical with the obligatory (much the way a Kafka story unspools in consistency, even as its premise defies order), which leads us to an ending that, as disturbing as it may be, makes perfect sense. At its heart, it suggests the sanctity of consciousness between creatures, be they human or beast, those elements that may connect all of us in ways we might not want to investigate, for fear of having to accept our actual place in the world. The idea that these creatures over which we fancy such dominion, are perhaps, in their emotion and bearing, not so far removed from our own provocations: We might proclaim ourselves the king of the jungle, but, in this case, our subjects turn out to have ideas of their own.

Rating: R, for some bloody violent images and sexuality/nudity