'No Time to Die' makes a killing internationally 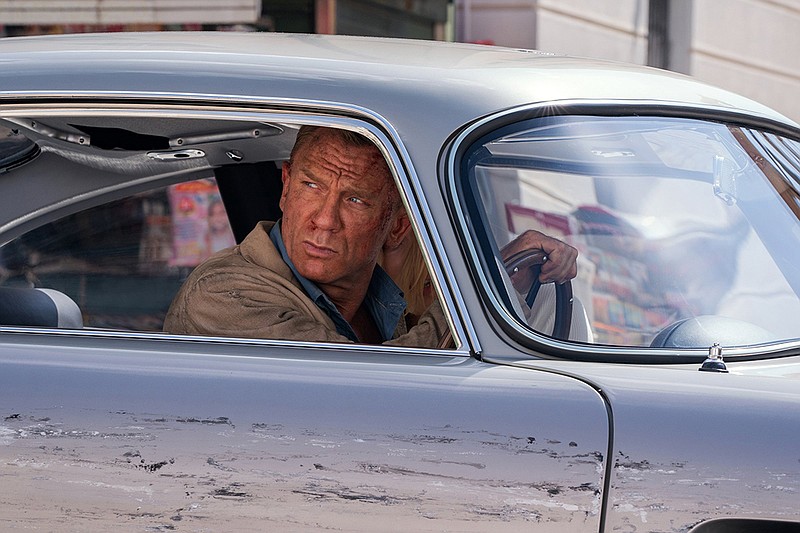 James Bond (Daniel Craig) drives his Aston Martin through Matera, Italy in “No Time to Die.” The film shot to the top of the box office, with more than $56 million taken in at U.S. theaters.

LOS ANGELES -- "No Time to Die" has given "Venom: Let There Be Carnage" almost no time to bask in its record-breaking theatrical debut, unseating the Marvel blockbuster atop the domestic box office with a solid $56 million opening, according to estimates from measurement firm Comscore.

Before hitting U.S. theaters, Daniel Craig's final outing as 007 notched a whopping $119.1 million internationally two weekends ago -- exceeding projections and becoming the first film since the covid-19 crisis to debut at more than $100 million abroad without playing in China.

"The character is decidedly from outside of North America. The international flair and flavor of the Bond movies, and the locations that these movies are shot in -- I mean, you can sit in a movie theater and be transported all over the world in a Bond movie -- that makes these films naturally have international appeal," said Paul Dergarabedian, a senior media analyst at Comscore.

"I think that's why this film is already at over $300 million globally.

"Given the demographic pull for the film, we can't expect the same kind of box office" success attained by younger-skewing properties, such as "Venom: Let There Be Carnage" -- which set the three-day weekend, pandemic box office record last week at $90.1 million -- from a Bond film, Dergarabedian said.

Speaking of "Let There Be Carnage," the second installment in the wildly popular "Venom" franchise occupied the No. 2 slot at the domestic box office last weekend with $32 million -- a 64% drop -- for a North American cumulative of $141.7 million.

"You don't get a $90 million opening weekend like we just had for 'Venom' if there's not a real desire for the public to come out," Mark Zoradi, Cinemark's chief executive officer, said Sunday.

The pandemic closed theaters and led studios to shelve their biggest movies, giving cinemas little to show even when they finally reopened. Now theaters are back, covid cases are easing from recent peaks, and fans can expect a regular cadence of big premieres.

But that too is another test for the industry -- whether enough consumers are comfortable sitting in a crowded theater. Studios have been dribbling out releases in recent months -- some only in theaters, some on streaming platforms for free or at a premium price, and some in both places at once.

Zoradi previously anticipated that the recovery would start over the summer -- "and then this horrible little thing called the delta variant hit," he said.

Now, "all of the key elements are saying, 'This is the beginning of the recovery,'" he said.

Next year promises a strong roster of movies, including the postponed "Top Gun" sequel and the much-anticipated "Avatar 2."

And many of those films will debut only in cinemas -- a key wish for theater operators that were hurt when new pictures were released online. Zoradi, who is retiring at year-end, said Cinemark has commitments from all of the major studios, except Walt Disney Co., to give theaters exclusive rights of varying lengths to first-run movies in 2022.

"Disney has only committed through '21, but they've also been very clear that they were happy with the results of 'Shang-Chi' and 'Free Guy,'" Zoradi said.

Shares of Plano, Texas-based Cinemark have risen 23% this year, but that gain masks a volatile year for investors who have seen the stock gain as much as 59% in a month and lose nearly as much in another. Larger rival AMC Entertainment Holdings Inc., a popular meme stock this year, has also registered huge swings.

"We're just returning to the way the business used to be," Zoradi said.

Up next is the latest installment in the ever-popular "Halloween" saga (today) and Oscar-nominated director Denis Villeneuve's star-studded adaptation of "Dune" (Oct. 22).

Print Headline: 'No Time to Die' makes a killing internationally