RT Clary having fun at position 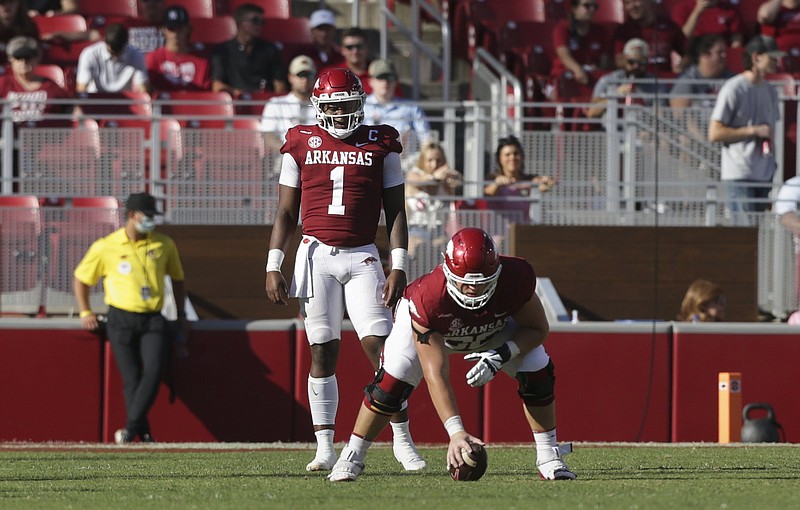 Arkansas’ Ty Clary prepares to snap the ball to quarterback KJ Jefferson against Georgia Southern on Sept. 18. Clary has played three positions along the Razorbacks’ offensive line this season and is expected to start at right tackle Saturday against Auburn, filling in for injured Dalton Wagner. (NWA Democrat-Gazette/Charlie Kaijo)

FAYETTEVILLE -- Super senior Ty Clary had an upbeat attitude about taking the starting reins at right tackle last week with senior Dalton Wagner sidelined for a while by surgery to repair a dislocated finger.

"Right tackle is fun again," Clary said. "Pre-game I knew I was going out there, so I was ready."

In Week 3, he subbed in for Wagner at right tackle for a while after an injury, moved to right guard to open the second half, then moved back to his former original position at center when Ricky Stromberg was rolled up from behind.

"I thought Ty did a really good job the entire day," Arkansas Coach Sam Pittman said of Clary's work against Ole Miss. "Did a nice job in pass protection.

"Ty is a veteran. He's started a lot of games, and going into the game I wasn't one bit concerned about right tackle because Clary obviously has been practicing it during the week for several weeks because of Wag's hand and we were taking Wagner out of any good on good."

Clary would make his 38th career start, early the most on the current team, if he's in the opening lineup for Saturday's 11 a.m. game against Auburn.

Defensive tackle John Ridgeway ranks second with 33 career starts, four of them at Arkansas, while cornerback Montaric Brown has 28, safety Joe Foucha 27 and Greg Brooks Jr., Myron Cunningham and Bumper Pool 26 each, all at Arkansas.

"Coach Kennedy has done a really good job of keeping me prepared for every position," Clary said. "He and Coach Pittman, they do great job of encouraging me and making sure I'm ready for each position, and what I like and kind of what I don't feel good about at the tackle spot."

Pittman said left guard Brady Latham, who saw plenty of action at right tackle against Georgia Southern, could play more at that spot as well.

The Razorbacks are one of only five programs to produce 630-plus total yards in two games this season, joining Kent State, Marshall, Ole Miss and Nebraska. Arkansas had 676 yards, a program record vs. SEC competition, Saturday at Ole Miss and had 633 yards against Georgia Southern.

KJ Jefferson's three rushing touchdowns at Ole Miss were the most by an Arkansas quarterback since Matt Jones had three against New Mexico State in 2003.

With KJ Jefferson's 326 passing yards, Raheim Sanders' 139 rushing yards and Treylon Burks' 136 receiving yards, the Razorbacks posted their ninth game in school history of having a 300-yard passer, a 100-yard rusher and a 100-yard receiver in the same game.

Arkansas wideout Treylon Burks can reach a standard in the school record books on Saturday.

Burks ranks third in the SEC and 26th in the FBS with 86.5 receiving yards per game. Burks has a catch in all 26 games of his career.

Auburn Coach Bryan Harsin, asked about this being his first game in Arkansas since leading Arkansas State to a 7-5 record and a co-championship in the Sun Belt in 2013, decided to drop some knowledge on Wednesday's SEC teleconference that dated back to his career as a backup quarterback at Boise State between 1996-99.

Harsin was a local kid from Boise, Idaho, and a sophomore in December 1996 when the Broncos were interviewing candidates during a coaching search.

"Houston Nutt, he came from Murray State, came to Boise State when I was a player," Harsin said. "I happened to be, because I was a local player and everybody was gone, sitting in on the interviews with the head coaches and he was one of them.

"Another buddy of mine, who played there, we were the two who got to sit in. ... We chose Houston Nutt, not because our opinion had anything to do with it. So when he left, obviously for Arkansas, I followed that program as well because he'd been there as a coach."

Big back Dominique Johnson has turned heads with his power running and tackle breaking this season, but the sophomore also has another laudable trait.

"He is our best pass protector," Coach Sam Pittman said, meaning among the running back crew. "He likes it."

Pittman compared Johnson's passion for blocking to his sisters wanting to play defense in the old 6-on-6 half-court girls basketball.

"I don't think you're really a good blocking running back unless you just really want to do it," Pittman said. "Everybody wants to carry it. So he really likes to block. I know he likes to run the ball. Man, the first run he made the other day was really an exceptional physical 8-yard run. But he really enjoys the physicality of the game. I've just been really happy with him."

Coach Sam Pittman didn't take kindly to an entity on Twitter calling him an "idiot" by choosing to receive the opening kickoff at Ole Miss last week.

The Razorbacks won the coin toss at each of the last two road games and elected to defer against Georgia and take the opening kick against the Rebels.

The Twitter poster said Pittman had "been an idiot ... the last 2 games," and commented that road teams should always defer to the second half.

Pittman wrote in response, "For the record, before I block you, we won the toss at Georgia and we did defer because as a staff that's what WE decided. Ole Miss we won the toss and took the ball. Went up 7-0. If I have a job opening, apply for the job so I can get educated on all your expertise. #gohogs."

Arkansas is one of five teams in the country with multiple wins over top 15 teams. The others are No. 1 Georgia, No. 2 Iowa, No. 5 Alabama and unranked Stanford.

Auburn leads the series by an 18-11-1 count, including an 8-6 edge in games played in Arkansas. The Tigers are 8-5 in games played at Reynolds Razorback Stadium with wins in three of the last four meetings.

The Tigers have pulled away from what was once a tight series by winning seven of the last eight games, all under Coach Gus Malzahn, the Arkansas prep coaching legend and former UA offensive coordinator from Fort Smith.

The last two games in Fayetteville have been routs, with Auburn winning by a combined 103-30.

Auburn's punt team will enter Saturday's game riding a streak of 160 games without having a punt blocked, a span that leads the FBS. The last punt block given up by the Tigers came against Mississippi State in 2009.

Arkansas has had four punts blocked in the last two seasons, including one at Auburn that led to the game's first points on Barton Lester's recovery of Jordyn Peters' block against George Caratan in the end zone.