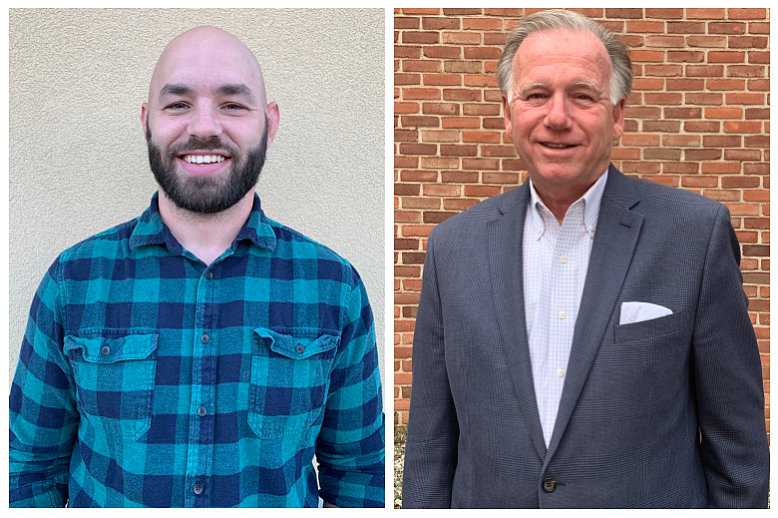 BENTONVILLE — An analyst is challenging the incumbent for the School Board’s Zone 7 seat.

Joe Quinn, 65, is running for his second term. Mike Swanson, 32, is making his first bid for a public office. Both men live in a part of Rogers that’s within the Bentonville School District.

Most school districts in the state held board elections in May, but Bentonville opted for a November election. School board positions are unpaid in Arkansas.

Only those who live in Zone 7 — which covers southwest Bentonville and parts of Centerton, Rogers, Highfill and Cave Springs — are eligible to vote in this election. There are 14,140 registered voters in the zone, said Dana Caler of the Benton County Clerk’s Office.

Swanson is the father of three: a 4-year-old, a fourth-grader at Evening Star Elementary School and a first-grader who attends school at First Baptist Rogers, he said.

“The older I get, the more I realize our time on this earth is very temporary,” Swanson said. “If you’re not pouring into somebody else, you’re kind of wasting your time.”

Swanson is an analyst for General Mills. He previously worked as a substitute teacher in Nebraska, as an adviser for Bayer Healthcare and a project manager for Advantage Sales and Marketing.

Swanson also serves the community as a Sunday school teacher with First Baptist Rogers and by coaching his son’s flag football team, he said.

His professional experience has provided him analytical and forecasting skills he feels would benefit the School Board, he said.

Swanson said he’s been attending board meetings for eight months and would also like to see board members delve deeper into topics presented for their approval to ensure decisions are well thought out.

On at least two occasions during time allotted for public comment at board meetings, Swanson has spoken out against the board mandating the wearing of masks in schools.

Quinn has voted repeatedly in favor of mask mandates.

Giving equal conversation to the value of students pursuing a trade, rather than a college track, following graduation is a topic he’d like to see the board address at a greater level, Swanson said. A greater emphasis and development of offerings at the district’s Ignite Center for Advanced Professional Studies would be a good start to building awareness of trades careers, he said.

Ignite opened in 2015 and offers training and certifications in several career areas such as construction, culinary arts and health. More than 340 high school and junior high students are enrolled in Ignite programs this school year, administrators said.

“Many students feel they have to go to college to find success,” Swanson said. “The reality is, there’s a lot of people that could be going out to start their own business, to join the labor force, go to a trade school and be just as successful.”

Quinn is a self-employed consultant with experience at television KTHV in Little Rock, the Arkansas Department of Human Services and former Gov. Mike Huckabee’s office, he said.

I think I come from a background of communications and policy and budget and how to convey a message to large groups of people,” Quinn said.

Quinn also serves as a member of the Junior Achievement of Arkansas board and as Arkansas Good Roads Foundation’s executive director, he said.

Quinn ran unopposed for School Board in 2016, one year after the board appointed him to a vacant seat. He has two children, both Bentonville High School graduates.

He said he’s running for a second term because he doesn’t want to walk away from the board during the turbulent time of the covid-19 pandemic and continued growth for the district.

District enrollment was 18,536 as of Wednesday, an increase of about 500 students from a year ago at this time, said Leslee Wright, district spokeswoman.

Quinn said his experience as a board member is valuable.

“I’m proud of the fact that the day I came on the school board, this district still had kids in trailers behind school buildings — that the growth was so extreme that we were using overflow trailers,” he said. “We built our way out of that, and we put strategies and financing in place to do nine school buildings in 10 years, and now all kids are in quality classrooms.”

Quinn said he’s been willing to ask tough questions at board meetings. He called himself a “huge believer” in transparency.

He added the district needs to get more sophisticated in how it zones students into school buildings.

• Residency: Rogers. He has lived in the district for seven years.

• Residency: Rogers. He has lived in the district for 15 years.

Benton County will hold early and election day voting for the Nov. 2 election for the Benton-ville School Board.

Only voters in Zone 7 will have a board race on their ballot. Zone 3 has one unopposed candidate. All other ballots will contain only a question on the millage rate, which is not changing.