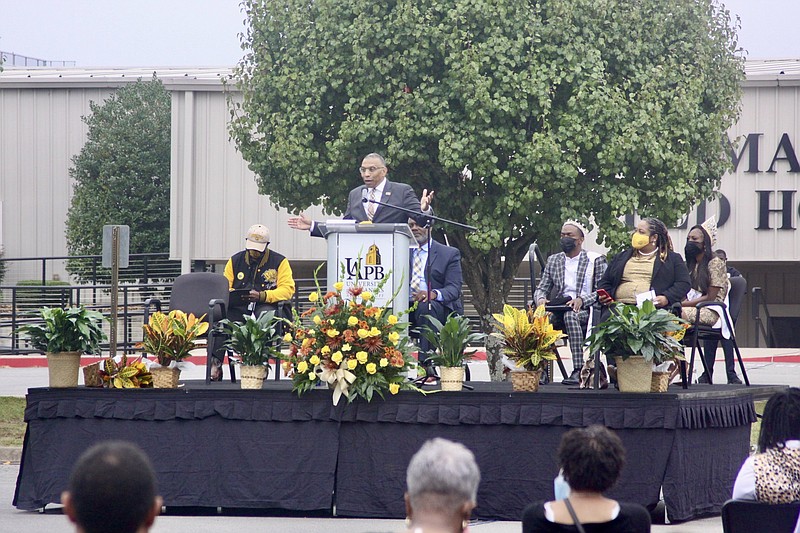 Laurence B. Alexander, chancellor of UAPB, speaks during the alumni assembly Friday morning. The university held the event as part of homecoming festivities this week. (Pine Bluff Commercial/Eplunus Colvin)

Friday morning gave University of Arkansas at Pine Bluff alumni a prelude to today's homecoming events as many gathered in the Golden Lion Stadium parking lot for the annual alumni assembly.

Black-and-gold-clad attendees from the classes of 1941 to 2020 reminisced as they enjoyed the UAPB marching band before the start of the program.

Kevin Crumpton and Kimmera Handley, the 2021 Mr. & Miss University of Arkansas at Pine Bluff, greeted the alumni, as well as the national alumni president, Kymara Seals.

After a pep performance by the UAPB Spirit Team, Athletic Director Chris Robinson introduced the UAPB football coaches and athletes.

The Vesper Choir performed a selection before UAPB Chancellor Laurence B. Alexander gave his address.

Alexander updated the alumni with positive enrollment and graduation statistics.

"Our enrollment has increased for the second consecutive year in a row," he said. "That's an accomplishment at a time when many institutions are down in enrollment."

[Video not showing up above? Click here to watch » arkansasonline.com/1016uapbalum/]

According to Alexander, UAPB's retention rate was at an all-time high of 74% but dropped to 62% because of the covid-19 pandemic.

"The pandemic is causing some challenges among students," Alexander said.

In the midst of the pandemic, the university suffered damage to three of its academic facilities, which caused some faculty and staff members and students to temporally relocate on campus. Alexander said officials are still working with contractors to get those buildings back in order.

"Power systems were destroyed in three academic buildings -- Corbin Hall, Henderson-Young Hall and Hathaway-Howard Fine Arts Center," he said. "We ask for the continued patience as we work daily and diligently to get the buildings up and fully functioning."

Alexander said UAPB has reaped some financial benefits, not only from tuition revenue but from state and federal funding, grants, public and private partners, and alumni.

Over the past eight years, Alexander said 35 major gifts to the university have been above $100,000.

Revenue is being spent to fund several much-needed projects and renovations that are in the works or in the planning phase, he said.

At Larrison Hall, an $8 million renovation, has begun, the chancellor said. And phase one of renovations of the Hazard Gym is expected to start soon, using $2.1 million that has already been secured.

The university is in phase one of constructing a track and field, and soccer stadium on campus and entering into phase two of the L.A. Davis Student Union renovation that was built in 1951.

With almost 3,000 students on campus, Alexander said, construction of a new student engagement center will begin in the next year.

That center will offer additional space for academic, curricular and recreational programs for students, and will provide more dining space.

"The university is on the right track, it is on a path to greatness, and we are moving higher as a university," Alexander said. "We continue to put the interest of students first and foremost in our deliberations. We continue to recognize and appreciate the great value that alumni bring through their time, their talent and their treasure. 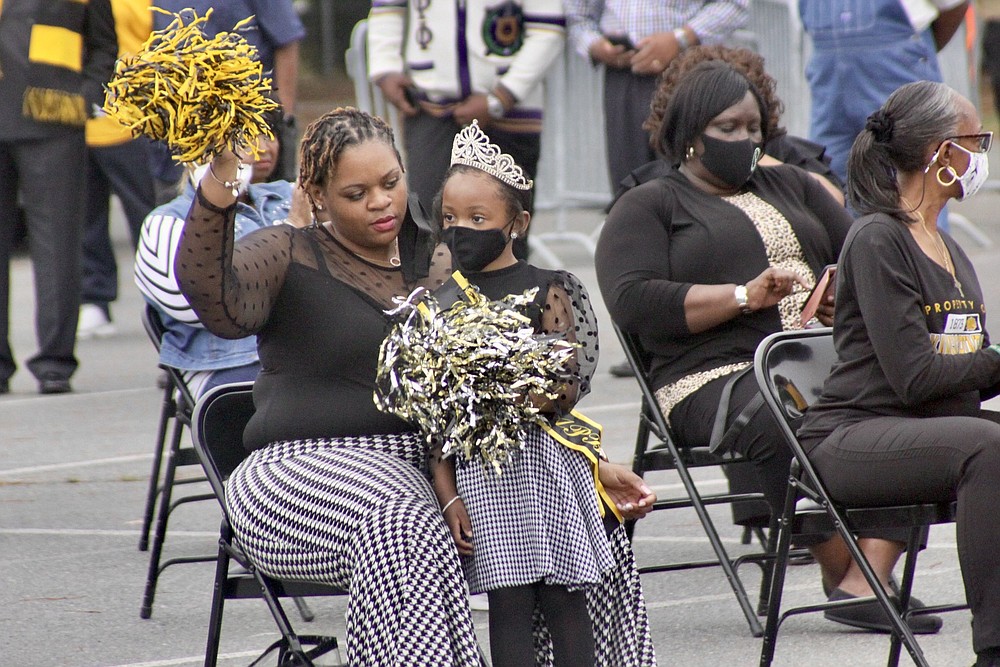