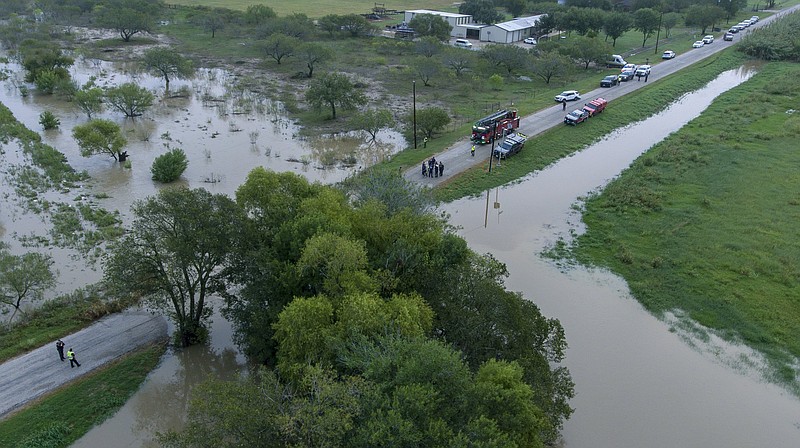 ST. HEDWIG, Texas -- A flash flood from the remnants of Hurricane Pamela swept a woman and a young girl to their deaths in a Texas creek as they were heading to a school and officials worked Friday to recover the woman's body, authorities said.

The 52-year-old woman and a 5-year-old girl died when the separate vehicles they were in were swept from a bridge Thursday morning into the flood-swollen Martinez Creek in St. Hedwig on the outskirts of San Antonio, according to Bexar County Sheriff Javier Salazar.

"There's nothing more heartbreaking than to see the body of a 5-year-old pulled out of a car," an emotional Salazar said. "She was still wearing her backpack ... it just doesn't get any worse than that."

A diver confirmed the woman's body was in the vehicle, but the vehicle shifted into deeper water in the rapid current and was more than 10 feet underwater, according to Salazar.

Emergency officials returned to the creek Friday to remove the vehicle containing the woman's body.

Four other children and a man were rescued from the two vehicles that were headed to a nearby elementary school, Salazar said.

CHICAGO -- Chicago Mayor Lori Lightfoot said Friday that she has taken her fight with the head of the city's police officers union to court, arguing that his call for officers to ignore the order to report their covid-19 vaccination status was illegal and endangering the public.

The mayor said in a statement that the city's law department filed a complaint in Cook County Circuit Court for injunctive relief against Fraternal Order of Police President John Catanzara, whom she accused of "engaging in, supporting and encouraging work stoppage or strike."

Catanzara has maintained that the officers have a legal right to follow his request to show up for work and be sent home for refusing to fill out the city's covid-19 portal.

On Friday, the Fraternal Order of Police filed its own complaint seeking a temporary restraining order to compel the city to go into arbitration over the mandate.

"They can take us to court all they want," he said in a video posted on the union's website. "We already are filing paperwork to dismiss that silly motion."

The California Fish and Game Commission voted this week to add the turtles to the state's Endangered Species Act.

The world's largest turtle species have been on the federal endangered species list since 1973. But scientists now know more about how crucial California is to their survival, according to Catherine Kilduff, an attorney with the Center for Biological Diversity.

Scientists say sea turtle numbers have declined by about 5.6% in California each year for the past three decades. About 50 sea turtles visit the California coast each year, compared with about 178 turtles in the 1990s, according to the Center for Biological Diversity.

Adding turtles to California's endangered species list will make them a conservation priority for state agencies. It will also increase the state's cooperation with federal agencies to protect the sea turtle population.

WATERVILLE, Maine -- Colby College is banning discrimination based on caste, a system of inherited social class, becoming one of the first colleges in the nation to do so.

The private liberal arts college revised its nondiscrimination policy to add caste to its list of protections for the campus community.

The efforts were led by a professor who took an interest in caste discrimination across the country and realized the college needed to recognize it as a form of discrimination, the Bangor Daily News reported.

"You have to first name what it is to say: This exists, we name it, we stand against it," said Sonja Thomas, associate professor and department chair of women's, gender and sexuality studies at Colby.

While caste is often associated with South Asia, such class-based systems come into play across religions, cultures and countries, and even in technology industries and academia, Thomas said.

Colby College's updated policy, announced this week, follows one adopted in 2019 at Brandeis University in Massachusetts.