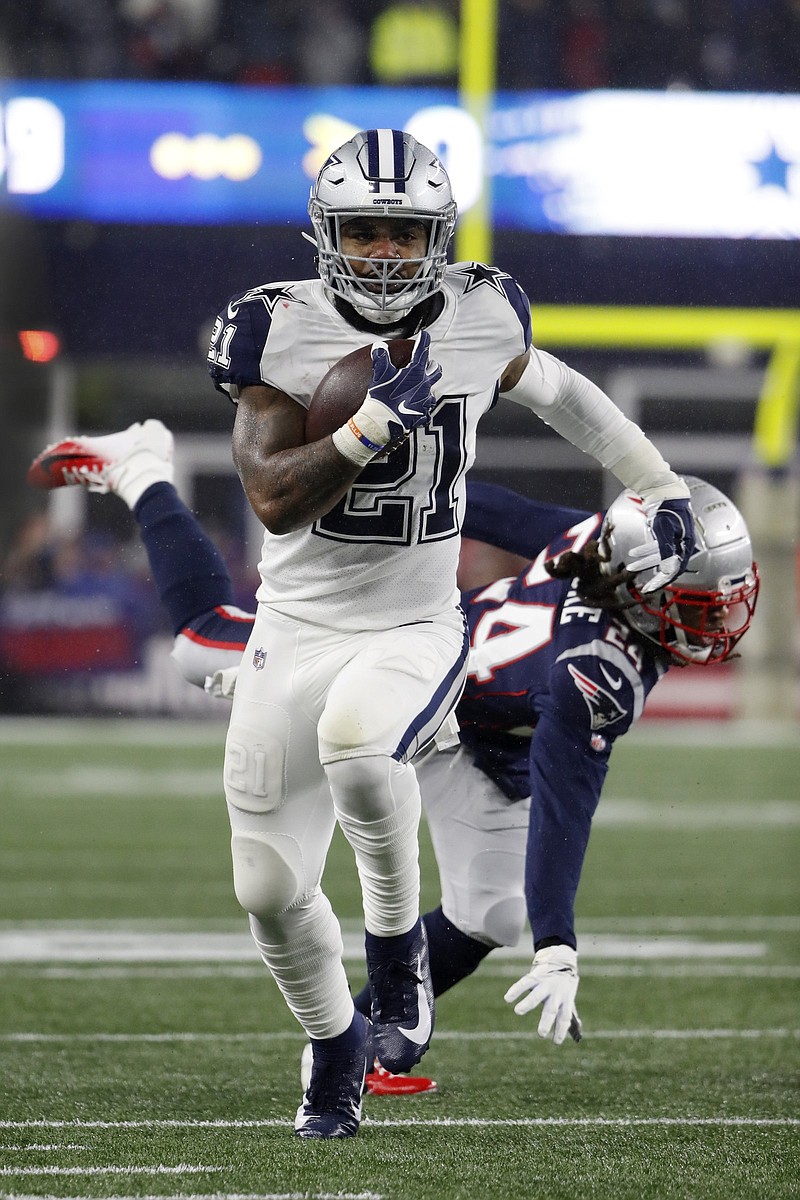 Running back Ezekiel Elliott played for Dallas in its last meeting with the New England Patriots in 2019, a 13-9 loss in which the Cowboys were held without a touchdown. Elliott and the Cowboys return to New England on Sunday looking to improve to 5-1 this season. (AP/Winslow Townson)

FOXBOROUGH, Mass. — Ezekiel Elliott didn’t have to think long this week about what he remembered most about Dallas’ last visit to New England in 2019.

“It was a like a hurricane,” Elliott recalled of the game played in wet, windy conditions and included temperatures that dipped into the 30s. “I had the big beach towel in my pants, so I could keep my hands dry. I remember wearing like five or six different pairs of gloves.” New England slogged out a 13-9 win that day in a matchup of the Patriots’ top-ranked defense and Cowboys’ top-ranked offense, holding Dallas without a touchdown for the first time that season.

It was the start of a three-game losing streak for the Cowboys, who lost four of their final six on the way to missing the playoffs at 8-8. New England finished 12-4, but were knocked out in the wild-card round in what turned out to be Tom Brady’s final game with the Patriots.

Much has changed two years later.

Aside from Brady being gone, New England (2-3) is also in the unfamiliar role of underdog as it tries to avoid its first 0-4 start at home under Bill Belichick. The Cowboys (4-1) have the NFL’s second-ranked offense this time, are armed with a rejuvenated Dak Prescott and look as equipped as they’ve ever been to beat the Patriots for the first time during the Belichick era.

Patriots linebacker Dont’a Hightower said the three pillars of their defense are to be physical, get after the quarterback and stop the run.

All three come with added challenges this week opposite a big Cowboys offensive line, a quarterback in Prescott who has one of the quickest releases in the league and a two-pronged attack at running back with Elliott and Tony Pollard.

“I think he’ll do whatever it takes,” Hightower said. “If he needs to run for a first down, I think he’ll do it. I think he’s very confident in where he’s at and I think his play definitely shows that” New England has won the last six matchups overall, with Dallas’ last victory in the series coming in 1996. The Cowboys haven’t won in New England since 1987.

“There is no punches pulled when you play these guys,” said McCarthy, who is 1-3 against Belichick. “This is a style of play our guys will embrace, but they do an excellent job of trying to scheme against the things you do best.”

Dallas defensive end Randy Gregory is on the best three-game stretch of his off-and-on career with four QB pressures in each of the past three games, according to Sportradar. His previous best total over three games was 10. Both his sacks came in the second of the three games.

While Gregory trails one Dallas rookie in sacks (Micah Parsons leads the team with 2½) and is tied with another 2021 draft pick in Osa Odighizuwa, his impact is clear with the Cowboys waiting for big-money pass rusher DeMarcus Lawrence to return from a broken foot.

This is just the third time in Gregory’s seven seasons he has been available at the start of the season. Substance-abuse suspensions sidelined him the other four times. And it’s the first time he has played through five games without missing any time for injuries.

“As far as my confidence goes, I feel like it’s right where it needs to be,” said Gregory, who has been nursing a sore knee between games. “There’s parts of my game I’ve still got to work on. There’s part of my body that don’t feel right. But my play on the field, I’m not really surprised about it. I think I’m going to trend upward.”