In hospital, on antibiotics for urological infection, aide says by STEFANIE DAZIO AND LOU KESTEN THE ASSOCIATED PRESS | October 16, 2021 at 4:27 a.m. 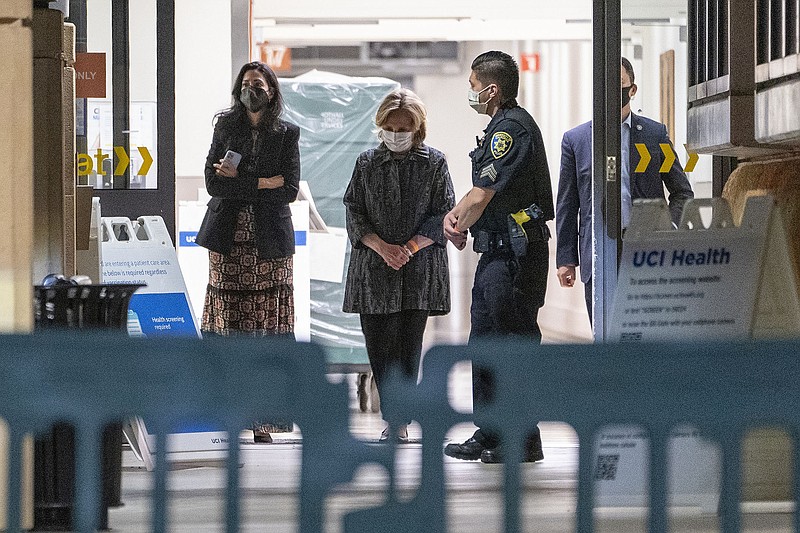 Hillary Clinton (center) walks Thursday out of the University of California Irvine Medical Center in Orange, Calif. The former first lady and secretary of state has been at former President Bill Clinton’s side while he is treated forundergoes care. (AP/Damian Dovarganes)

ORANGE, Calif. -- Bill Clinton will remain hospitalized overnight as he recovers from a urological infection, and a spokesman said Friday that he was doing better and was in good spirits.

"All health indicators are trending in the right direction, including his white blood count, which has decreased significantly," spokesman Angel Urena said in a statement.

Clinton, 75, will remain at the University of California Irvine Medical Center overnight so he can receive further intravenous antibiotics, Urena said.

"President Clinton continues to be in excellent spirits, and is deeply grateful for the outstanding care he is receiving and the well wishes that people have sent from across America and around the world," the statement said.

An aide to the former president said Clinton was in an intensive care section of the hospital, though not receiving ICU care.

The aide, who spoke to reporters at the hospital on the condition his name wasn't used, did not elaborate on the reason Clinton was in the ICU. He said Clinton had a urological infection that spread to his bloodstream, but is on the mend and never went into septic shock, a potentially life-threatening condition.

[Video not showing up above? Click here to watch » arkansasonline.com/1016clinton/]

Clinton was in good spirits, juggling books and watching TV coverage about his hospitalization, the aide said.

Hillary Clinton was with him in the hospital. His daughter, Chelsea Clinton, was not there.

There was no immediate word on any timeline for his release.

President Joe Biden said Friday during remarks at the University of Connecticut that he had spoken to Clinton and the former president "sends his best."

"We're all thinking about President Clinton today," he said. "He's always been the comeback kid."

Later, Biden told reporters that Clinton is "not in any serious condition" and is "getting out shortly."

Clinton was admitted Tuesday evening to the medical center for a non-covid-19-related infection, Urena said Thursday in a statement.

A second statement from Clinton's spokesman quoted Dr. Alpesh Amin and Dr. Lisa Bardack, who said the former president has been "administered IV antibiotics and fluids."

A spokesman for the Clinton Foundation said the former president was in the Los Angeles area for private events related to his charitable organization.

Information for this article was contributed by Zeke Miller, Alexandra Jaffe and Robert Jablon of The Associated Press.