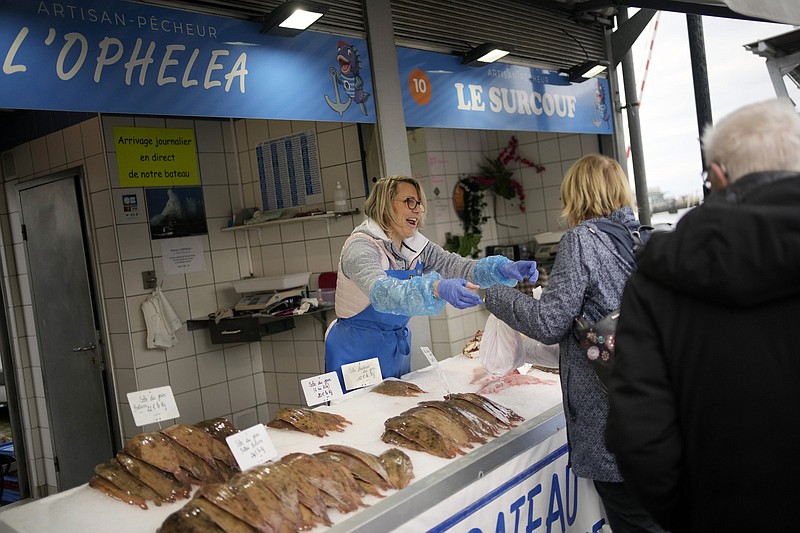 People buy fish at the market of the port of Boulogne-sur-Mer, northern France, on Friday. France wants more fishing licenses from London, but the U.K. is holding back. (AP/Christophe Ena)

BRUSSELS -- The Brexit brawl kicked into high gear Friday on sticking points over Northern Ireland and French fishing, coming almost a year after a deal on a free-trade agreement was supposed to have officially sealed the separation between the European Union and the United Kingdom.

The top Brexit negotiators from both sides entered talks again, with troublesome trade issues in Northern Ireland taking center stage. If they fail to find a common solution, the suspension of the trade deal and even retaliatory measures might be possible between the two. The EU is looking for a deal by Christmas.

"Obviously, there is still quite a big gap. And that's what we've got to work through," U.K. chief negotiator David Frost said as he entered a lunch meeting with his EU counterpart, Maros Sefcovic.

Making matters worse, fish also might be pushed onto the menu, with French fishermen more vocal about blocking ports over what they see as British duplicity in refusing to grant them all the fishing licenses they want.

While fishing licenses might be easily solved with some goodwill, the standoff over Northern Ireland is different and fundamental.

Northern Ireland is U.K. territory but effectively remained part of the EU's borderless trading market for goods when the U.K. left the bloc last year, causing practical problems for businesses and institutional wrangling over which side is in charge of what.

The U.K. also is insisting the EU cede final legal oversight by its top court of any disputes on Northern Ireland trade and instead make them subject to independent arbitration, something the 27-nation bloc is flatly rejecting.

"The governance arrangements as we have them don't work," Frost said. "We need to take the [EU] court out of the system as it is now, and we need to find a better way forward."

Beyond rejecting any moves on the court, the EU is proposing concessions to the U.K. on how to ease transport and customs between Britain and Northern Ireland.

Under the new rules put in place this year, goods must be checked between Britain and Northern Ireland and meet EU standards. Sefcovic proposed changes that he said could cut checks on food, plants and animals by 80% and paperwork for transport companies in half.

He said some trucks crossing the Irish Sea from Britain into Northern Ireland could see their red tape reduced from 100 forms to just one.

Frost acknowledged that the EU had seized the initiative.

"The EU have definitely made a good effort in pushing beyond where they typically go in these areas, and we're quite encouraged by that, but obviously there is still quite a big gap," he said.

If Sefcovic is putting forward only adaptations to the so-called Northern Ireland Protocol, the U.K. is looking for a full renegotiation.

Germany supported Sefcovic, with government spokeswoman Martina Fietz saying in Berlin that "we reject a renegotiation of the protocol. We agree with the European Commission and the other EU member states on this."

"I believe that we could be in the homestretch with our proposals on the table," Sefcovic told the BBC. "Let's try to solve all these issues before Christmas, because I think that would be the best Christmas gift we can give to the people of Northern Ireland."

France wants its EU partners to act as one if London won't grant more licenses for small French fishing boats to roam close to the U.K. crown dependencies of Jersey and Guernsey, just off France's Normandy coast.

French fishermen on the English Channel are threatening blockades in ports such Calais and Boulogne, something that could have a quick and direct impact on trade with the U.K.

"We were promised to be able to go fishing in English waters, but since Jan. 1, it's forbidden to us. We're losing 50% of our income," said Pierre-Yves Dachicourt, a French fisherman from the northern Channel town of Boulogne.

"We're going to consider direct action, because this has to end," he added. "We can't live like that."

Information for this article was contributed by Jill Lawless, Geir Moulson and Arno Pedram of The Associated Press.