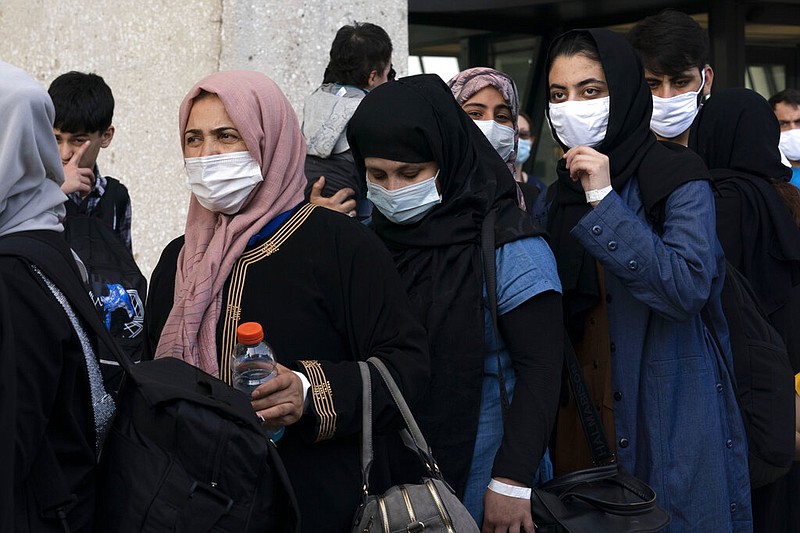 Families evacuated from Kabul, Afghanistan, wait to board a bus after they arrived at Washington Dulles International Airport in Chantilly, Va., on Friday, Aug. 27, 2021. (AP/Jose Luis Magana)

With dozens of Afghan refugees headed for the Little Rock area, local houses of worship are banding together to welcome them, lining up housing, furniture, food and other essentials.

The first families began arriving this week. Others will soon be on the way.

The interfaith assistance has been vital, Verkamp-Ruthven said.

"Basically if we didn't have them, I'm not exactly sure what we would do," she said. "They're a very integral part of our entire program. They stepped up from the very beginning."

In most instances, a congregation has essentially adopted an entire family. In others, churches, temples or mosques have teamed up to provide what they need.

The Interfaith Center of Arkansas helped to foster the collaboration, reaching out to its allies early in the process.

Within three days, 11 congregations had agreed to participate, said Sophia Said, the group's executive director and the founding chairwoman of the Madina Institute and Mosque.

"The interfaith community has stepped up like I have never seen before," she said.

The outpouring of support for Afghan refugees "shows the power of the faith community to come together, irrespective of the boundaries of race and religion," she added.

For some, there are doctrinal reasons to get involved.

Catholics, Verkamp-Ruthven said, believe they're commanded to help the newcomers.

Other faith traditions also emphasize the need for hospitality.

"And if a stranger sojourn with thee in your land, ye shall not do him wrong," the Hebrew Bible states, beginning with Leviticus 19:33 in the 1917 Jewish Publication Society of America translation. "The stranger that sojourneth with you shall be unto you as the home-born among you, and thou shalt love him as thyself; for ye were strangers in the land of Egypt."

The Quran, in al-Nisaa 4:36, puts it this way: "Serve God, and join not any partners with Him; and do good -- to parents, kinsfolk, orphans, those in need, neighbors who are near, neighbors who are strangers, the companion by your side, the wayfarer (ye meet), and what your right hands possess."

The Catholic Church has been helping with refugee resettlement for generations. But in recent years, with the Trump administration sharply curtailing refugee admissions, there hadn't been as many families to serve, Verkamp-Ruthven said.

That changed with the collapse of the pro-U.S. government in Kabul on Aug. 15. Suddenly, there were tens of thousands of Afghan war survivors with nowhere to go; with the Taliban seizing power, rescuing America's Afghan allies became a priority.

In Little Rock, the Catholic diocese wanted to help but was pressed for time.

"Catholic Charities Refugee Resettlement [in Arkansas] hasn't resettled anybody in about five to six years, so we basically had to build things up from scratch," Verkamp-Ruthven said.

Ultimately, the effort was ecumenical -- multi-denominational -- and interfaith as well.

"We've got nine sponsor teams and they are so dedicated, so motivated, enthusiastic, wanting to help with resettling someone," Verkamp-Ruthven said.

The teams will maintain regular contact with the families they have adopted. The agency will take care of the paperwork and provide other assistance.

"Catholic Charities is playing the role of overseeing everything, maintaining the case files and making sure that everything is completed. But they're really the ones that are on the ground ... with each family," she said. "They're going to be the ones picking them up at the airport. They'll take them to their temporary housing. They furnished it. They found appropriate food, clothing, all of that."

Once the refugees get their bearings, they'll need to enroll their kids in school.

One of the families coming to Arkansas has 10 members; two have eight.

Refugee financial assistance is designed to be short-term; the newcomers will soon be looking for employment.

"These are very proud and independent people, and they're going to be very ready to get on their feet, I would imagine, as quickly as possible," said Dr. Sherry Simon, a clinical psychologist and member of Pax Christi Little Rock.

Thus far, there has been no shortage of volunteers, she said.

"Pax Christi is the most gung-ho group when it comes to helping folks, and doing charitable work," she said. "People were very excited about this opportunity."

The enthusiasm is shared by others in the community, she said.

A Middle Eastern restaurant volunteered to prepare a welcome dinner for the newcomers.

That way, "they'll have some warm and familiar food when they arrive," Simon added.

Afghanistan is a young country; the median age of its 37.5 million residents is 19.5, according to the CIA World Factbook.

The population is estimated to be 99.7% Muslim.

Most -- 78% -- speak Afghan Persian (also known as Dari.) Roughly 50% can communicate in Pashto, the country's other official language. Only 5% speak English.

With the refugees' arrival imminent, finding translators has been a priority.

"There are very few Afghans in Arkansas, at least in Central Arkansas," said Dr. Sara Tariq, a Madina Institute and Mosque board member. "That was one of our major challenges."

Fortunately, the mosque was able to find interpreters, she said.

It has sponsored a family and is ensuring that all newcomers have prayer rugs, copies of the Quran and access to halal groceries.

Some members of the Muslim community have been refugees themselves, said Tariq, an internist at the University of Arkansas for Medical Sciences and a member of the Interfaith Center's board. Others have witnessed the suffering on television and want to help alleviate it.

"Seeing what we saw on the news, a lot of people felt a deep sense of empathy for what they've been through and what they're facing right now," she said. "We wanted to play a central role in helping the Catholic Charities get people to Arkansas and have them settled here."

"I can't even imagine anything more consistent with Judaism and with the Jewish experience in America," said Rabbi Barry Block, noting his own community's immigrant roots.

The refugee experience helped shape Judaism and its teachings, he noted.

"Thirty six times in the five book of Moses it [says] to: 'Remember the stranger, for you were a stranger in the land of Egypt,'" he said.

FROM 'STRANGER' TO 'NEIGHBOR'

Volunteers hope to ease the transition from "stranger" to "neighbor."

Members of Trinity Episcopal Cathedral don't know when their family will arrive, but they're prepared to welcome them, according to Amy Dafler Meaux, its dean and rector.

The home they've prepared is fully furnished, freshly painted and stocked with provisions. Labels, written in the refugees' native language, will be posted on drawers and closets so that it's easier for them to find what they need.

Temple B'nai Israel members are providing some of the resources.

Organizers hope the house will be an oasis.

"The folks that we are hoping to assist have been through a lot of trauma," Meaux said. "We want this, their first space, to be as safe and hospitable and welcoming as possible."

"This is a way to help international people in our town and to do something to totally change the trajectory of their life, so we were thrilled to do that," said Dora Jane Flesher, one of the Presbyterian team members.

After hearing about the project from Sophia Said, "We sent out an email to the church, to all the members, and, right away, I had 70 people contacting me and they said, 'We want to help,'" Flesher said.

Like the Catholics, the Presbyterians believe they are obeying the Lord's command.

"That's what we're called to do: to help the least and the lost, the orphans and the widows," Flesher said. "We're not just talking about things; we're doing things."