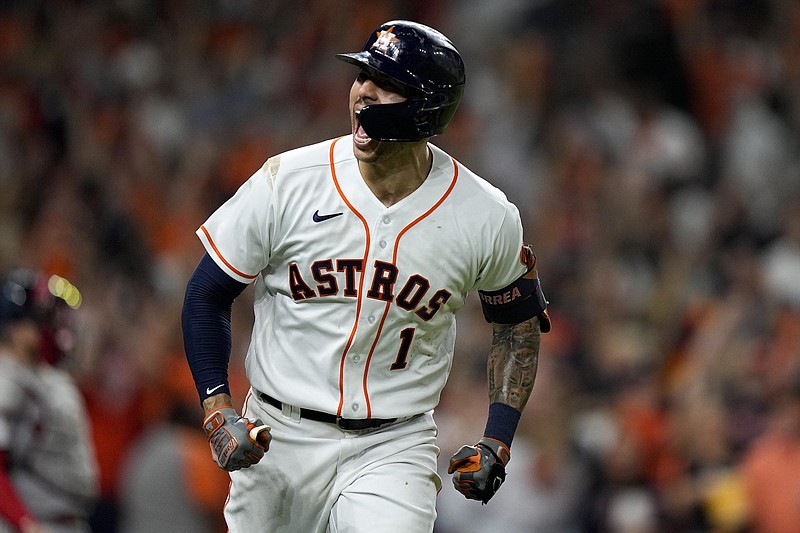 Carlos Correa of the Houston Astros celebrates as he rounds the bases after hitting a home run in the seventh inning of the Astros’ victory over the Boston Red Sox on Friday night in Game 1 of American League Championship Series. (AP/David J. Phillip)

HOUSTON -- Carlos Correa paused a few seconds at the plate, tapping the spot on his wrist where a watch would be, after hitting a tiebreaking home run in the seventh inning that propelled the Houston Astros over the Boston Red Sox 5-4 Friday night in the AL Championship Series opener.

"It's my time," he screamed before trotting around the bases.

And if his time with the Astros runs out at the end of this season, the star shortstop sure is making this an October to remember.

Correa teamed with Jose Altuve to do just enough to overcome the heroics of Kike Hernandez, who starred with his bat and glove for the wild-card Red Sox.

Altuve tied the game with a two-run shot in the sixth before Correa connected off losing pitcher Hansel Robles with two outs in the seventh to put the Astros ahead 4-3.

Correa, who has been with the Astros since being selected first overall in 2012, becomes a free agent at season's end and it seems likely that he won't remain in Houston.

Hernandez, who won a World Series with the Dodgers last year, homered twice among his four hits and likely saved multiple runs with two terrific catches.

His second home run came off closer Ryan Pressly to start the ninth and cut the lead to 5-4. But Pressly retired the next three batters to get the save.

Game 2 is today in Houston.

Ahead 4-3, the Astros loaded the bases with no outs in the eighth when Hirokazu Sawamura plunked Martin Maldonado. Houston added some insurance when Yuli Gurriel slid in just before the tag to score on a sacrifice fly by Altuve that made it 5-3, beating a terrific throw by Hernandez.

Chas McCormick singled with one out in the sixth before Altuve became the fourth player in MLB history to hit at least 20 postseason home runs with his shot to left-center off Tanner Houck that tied it at 3.

Hernandez opened a three-run third with his soaring home run to center field to tie it at 1-all.

Xander Bogaerts walked with one out and Rafael Devers singled. J.D. Martinez hit a grounder to Altuve for what should have been a routine play. But the ball grazed his glove and rolled between his legs to allow Martinez to reach and Bogaerts to score to put Boston up 2-1.

Hunter Renfroe then hit an RBI double to left field to extend it to 3-1 before Houston's two brightest stars came through late.

Both teams leaned heavily on their bullpens after both Boston starter Chris Sale and Houston's Framber Valdez were chased in the third.

Ryne Stanek (Arkansas Razorbacks) got the last out of the seventh for the win.

Sale, who was tagged for five runs in one inning in his previous start against Tampa Bay in the AL division series, permitted five hits and a run in 2 2/3 innings Friday. Valdez gave up six hits and three runs -- two earned -- while also getting just eight outs.

The Astros led 1-0 after Altuve scored on a sacrifice fly by Yordan Alvarez in the first.

For the next few innings it looked like it wouldn't be the Astros' night.

Houston loaded the bases with one out in the second, but Altuve struck out before Sale escaped the jam with a huge assist from Hernandez in center field. Hernandez, whose MLB debut came when he subbed for Altuve late in a game in 2014, sprinted to rob Michael Brantley with a diving catch in shallow center to end the inning.

The Astros had runners at first and second with two outs in the fifth when Hernandez struck again. He made a back-handed grab in right-center on a ball hit by Kyle Tucker to leave them empty-handed once more.

Hernandez even seemed surprised he made the grab, contorting his face into a shocked look after the ball hit his glove. 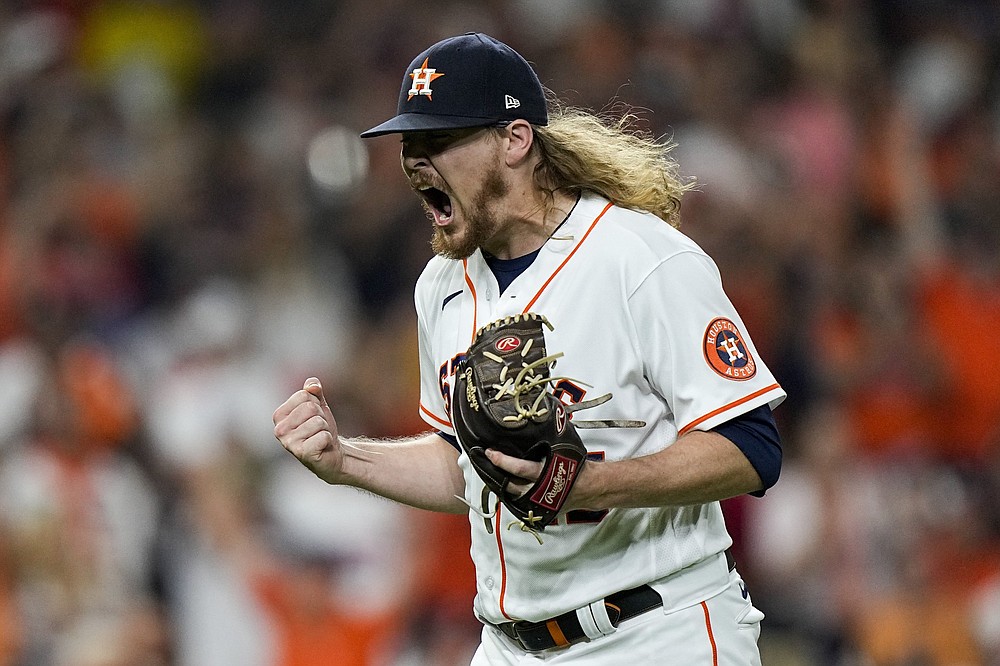 Houston reliever Ryne Stanek (Arkansas Razorbacks) celebrates Friday after getting J.D. Martinez to ground out in the top of the seventh inning as the Astros beat the Boston Red Sox 5-4 in Game 1 of the American League Championship Series at Minute Maid Park in Houston. Stanek picked up the victory. (AP/David J. Phillip) 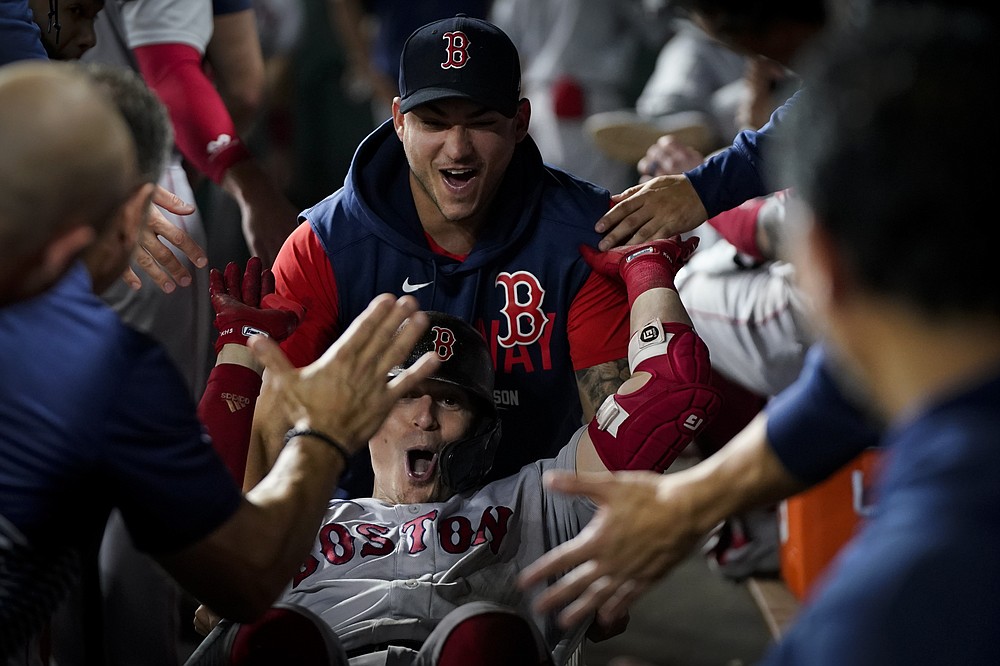 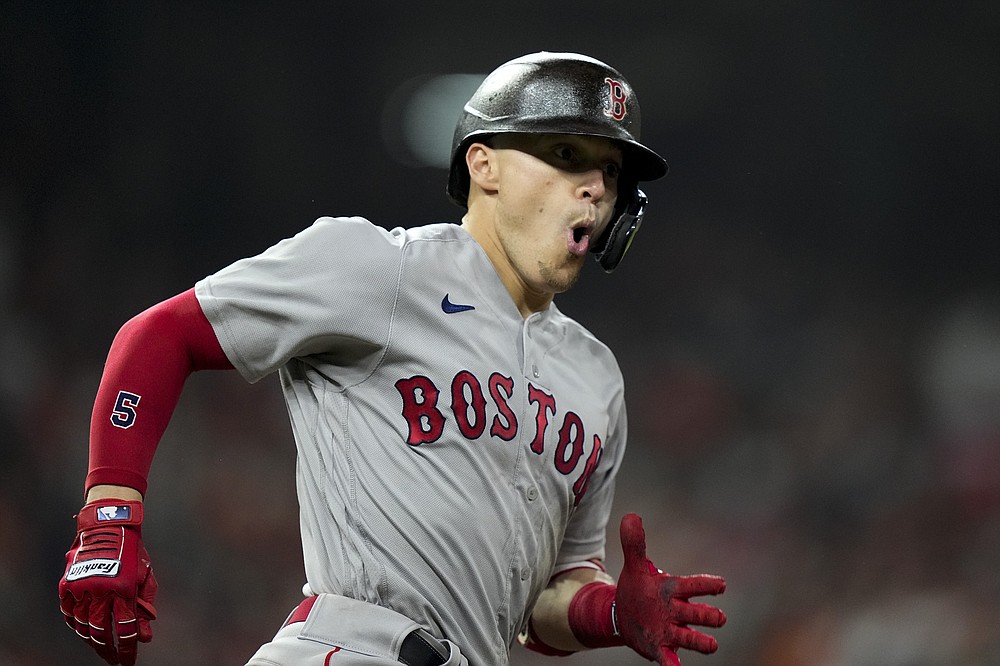 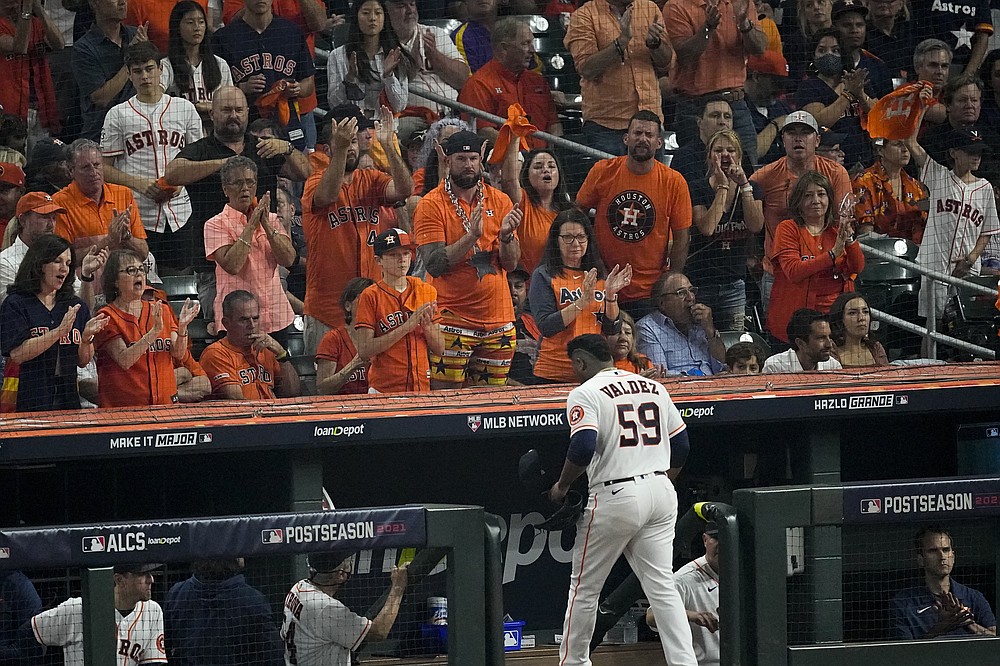 Fans react after Houston Astros starting pitcher Framber Valdez is taken out of the game against the Boston Red Sox during the third inning in Game 1 of baseball's American League Championship Series Friday, Oct. 15, 2021, in Houston. (AP Photo/Sue Ogrocki) 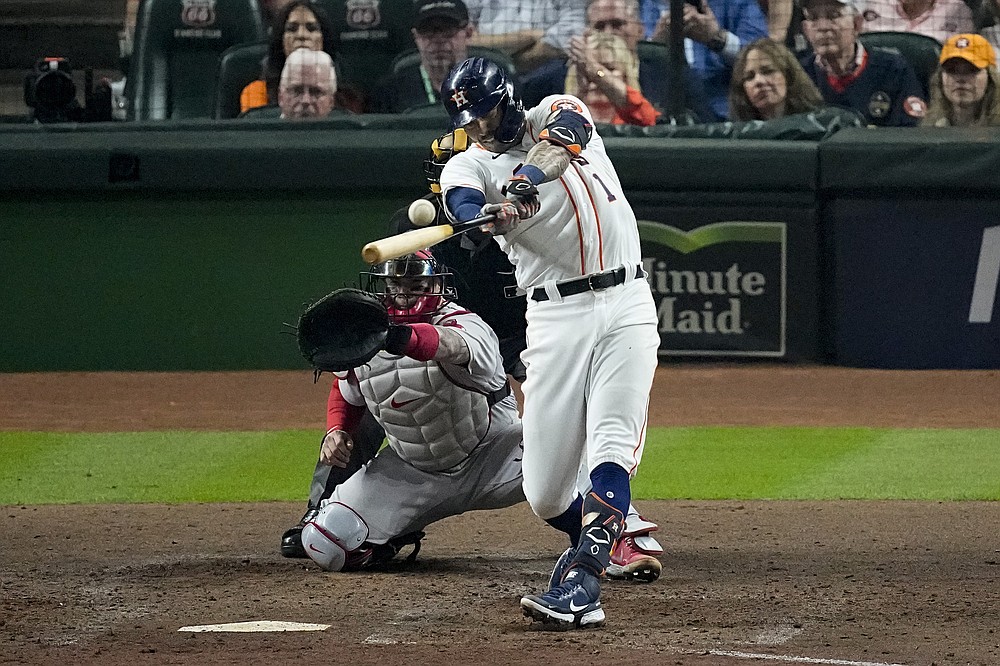 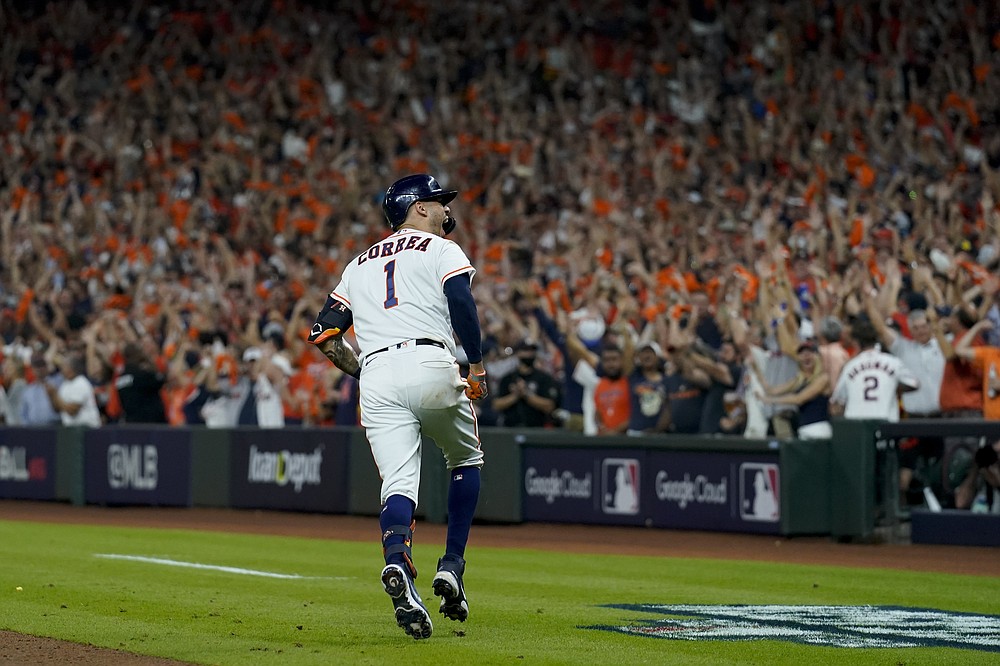 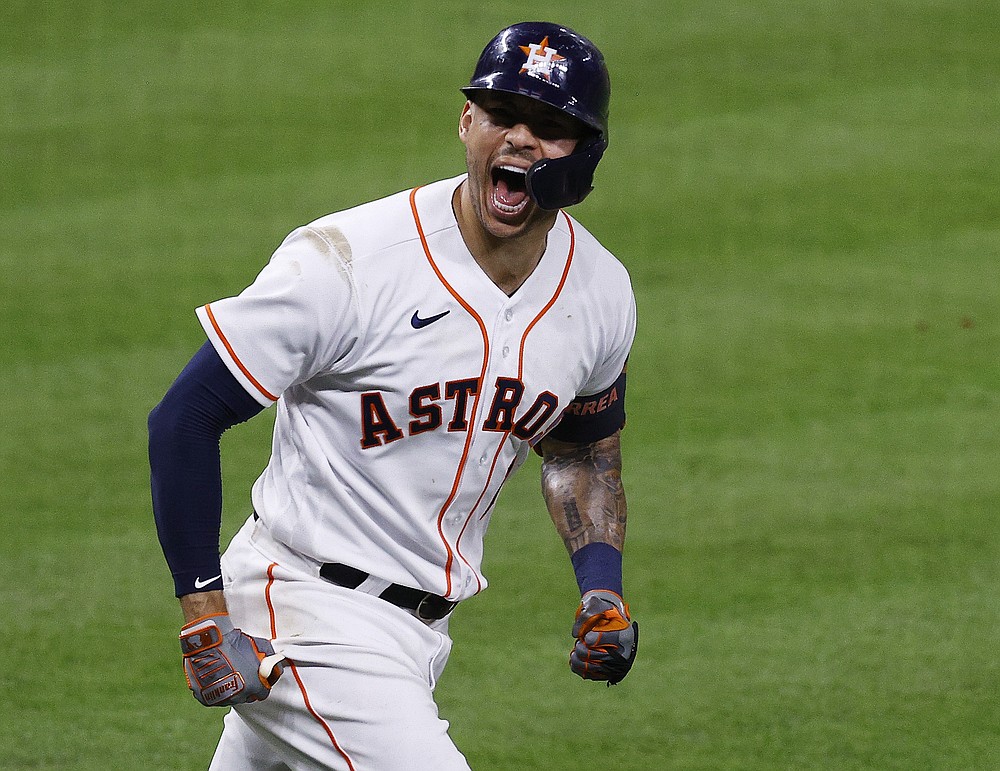