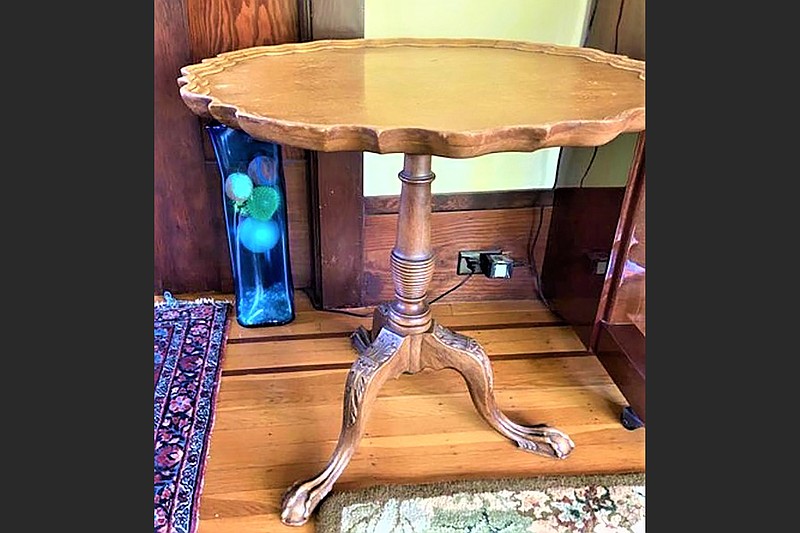 DEAR HELAINE AND JOE: We found this pie crust table on the street and rescued it. The finish on the top is crackled and peeling, but otherwise, it is in good condition — including the tilt top mechanism. The wood appears to be mahogany. What are its age and value? Should we refinish it? And what is its monetary value?

DEAR S.H.: Joe vividly remembers careening through the streets in the environs of White Plains, N.Y., with Helaine behind the wheel. Suddenly, Helaine made a U-turn, stopped the car, and jumped out. A somewhat bewildered Joe wondered what the heck was going on, but it soon became apparent when Helaine ran over to the curb where a bunch of garbage had been piled waiting for the refuse people to pick it up.

Much of the garbage heap consisted of an old sofa — and that was Helaine's target. Using her headlights to inspect the sofa, she soon shook her head and came back to the driver's seat pronouncing the sofa to be truly "garbage." An embarrassed and bewildered Joe was thinking that he could have told her that all along.

But we knew that many people — often despairingly called "dumpster divers" — search the trash on the streets looking for discarded treasures — and sometimes they find them. This generally happens in larger cities such as New York, Philadelphia and Los Angeles, but we have seen it successfully done in smaller cities such as Lexington, Ky.; Nashville, Tenn., and their suburbs. As Helaine would say, "Street finds are so much fun!"

This particular table is in the style of English cabinetmaker Thomas Chippendale, whose London workshop was the meeting place for London's fashionable and artistic communities. In 1754, Chippendale published The Gentleman and Cabinet Maker's Directory, which allowed other craftsmen to copy his style.

This style crossed the Atlantic and could be found in America's fashionable dining rooms and parlors. The Chippendale style went out of fashion in the early 19th century but was revived around America's Centennial celebration in 1876. After that, Victorian reinterpretations and "Mission" furniture forms intervened, but the Chippendale style was revived once again during the first two quarters of the 20th century.

The tilt-top tea table in today's question was probably new in the early second quarter of the 20th century. It is probably pre-World War II, but it is not earlier than about 1930. It has many of the calling cards of an 18th-century piece with a well-turned pedestal and good-looking ball and claw feet, but its pie crust top is a bit too thick and lacking in grace.

The carved acanthus leaves on the knees of the legs are attractive, but they are not nearly as well-executed as they would have been on an 18th-century example. The table is a good 80 to 90 years old and will be an antique soon and is worth preserving as a useful part of home decor. S.H. should just give it a good cleaning or have it lovingly refinished — no sandpaper and no polyurethane — and this street find should be worth $225 to $275 for insurance purposes.