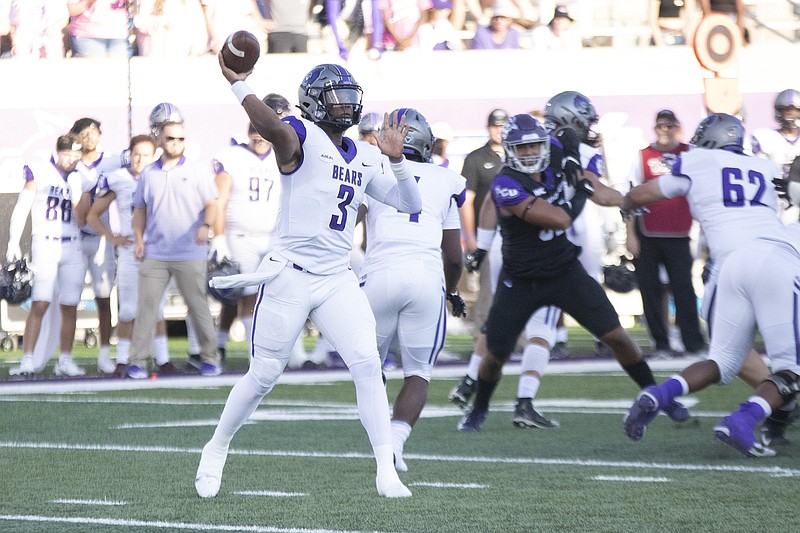 The University of Central Arkansas is in a good place heading into today.

Two weeks prior, the Bears (2-3) overcame a crucial hurdle by winning for the second time this year and avoiding one of the worst starts in recent program history. That led into a bye week and extra time to prepare for today's opponent, Eastern Kentucky (4-2).

But the Colonels pose a big problem, UCA Coach Nathan Brown said, in part because they run a defense that he called an "Iowa State-type," with three linemen up front and the eight surrounding them.

"You don't see a defense like this very often," Brown said. "We're having to do some different things, schematically, against a defense like this, so [I've] been very impressed just watching them over the last week-and-a-half on film."

Statistically, the Colonels aren't dominant. They don't limit their opponents to trace amounts of yardage. Their run and pass defenses both rank in the middle of the pack of the FCS. With smaller, athletic personnel (its largest linebacker is listed at 226 pounds), Eastern Kentucky has used its unique scheme loaded with transfers to become one of the more impressive defenses in the FCS.

Eastern Kentucky lists seven transfers on defense, six of which came from the FBS level.

"They're a familiar opponent," Brown said. "We played them twice last year, but there's a lot of new numbers and faces on their defense and they're playing at a really high level. It's been impressive to see how they've meshed and gelled ... with so many new faces."

Some notables on their depth chart include Je'Vari Anderson, who transferred from UCLA, and Roland Walder, a Bowling Green transfer. A player who stood out to Brown the most was Central Missouri transfer Ubong Udom, who's tied for first on the team in sacks (2.5).

Eastern Kentucky's 10 interceptions on defense, tied for the second-most in the FCS, include three which have gone for pick-six touchdowns.

"We've talked about it every day," Brown said about the Colonels' defensive touchdowns, "at least since we've been preparing for Eastern Kentucky."

It's a notable statistic, as the Bears come into the game with an even-turnover margin, whereas the Colonels are at plus-3. While UCA has gathered eight turnovers on defense, they've also turned the ball over eight times, all on interceptions from quarterback Breylin Smith.

Coming into UCA's bye week, the quarterback was tops in the FCS in several categories, including passing touchdowns. However, his eight interceptions are third-most in the FCS. While Smith's interception totals are higher than Brown would like, he said he's confident in the quarterback's ability to have a good day against the Colonels.

Brown has noticed through film study that Eastern Kentucky's defense has shown aggressive tendencies, in large part leading to their success in the turnover margin. That's a lot of where Smith has to focus in preparation for the Colonels, Brown said.

The quarterback said a lot of what he does in preparation each week is focusing on what he can control and not concerning himself with where his opponent excels.

"I really just try to focus on ourselves, on myself being the best version of me that I can be," Smith said. "I don't really look into all that. I think more so of looking at us as an offense and just working to get better."

NOTEWORTHY Despite the series between these teams being two games deep and less than a year old, today will be the third time the Bears and Colonels have played in the past year. … Defensively, Eastern Kentucky ranks No. 59 (total defense), No. 64 (passing yards allowed) and No. 51 (total defense). … The Colonels lost 30-3 to Louisville in Week 2.