U.S. gearing up to revive Trump policy at border

Decision rests on whether Mexico will accept returnees by Compiled Democrat-Gazette Staff From Wire Reports | October 16, 2021 at 4:34 a.m. 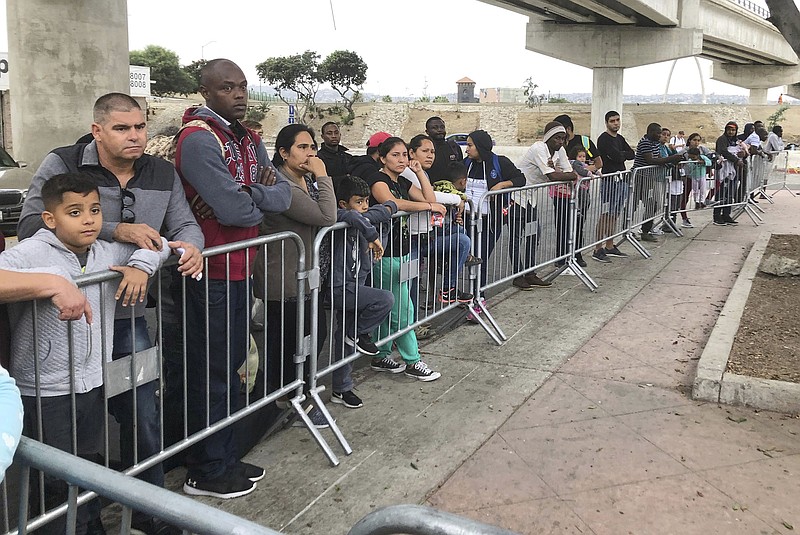 Asylum seekers in Tijuana, Mexico, listen to names being called from a waiting list Sept. 26, 2019, to claim asylum at a border crossing at San Diego under the Migrant Protection Protocols implemented during the Trump administration. (AP/Elliot Spagat)

The Biden administration is prepared to reimplement the Trump-era border policy known as the Migrant Protection Protocols in mid-November if the Mexican government agrees to accept the return of asylum-seekers to its territory, the government told a federal court late Thursday in a midnight filing.

Biden officials said they have signed contracts to reopen soft-sided "tent courts" at border crossings in Laredo and Brownsville, Texas, where asylum-seekers placed into the Migrant Protection Protocols would appear for hearings via videoconference, as occurred under President Donald Trump.

The decision to spend $14 million to rebuild the facilities was made because of "substantial progress" in talks with Mexico, senior border official Blas Nunez-Neto told the court in a declaration.

In August, a U.S. District Court judge in Texas ordered the Biden administration to restart the Migrant Protection Protocols, also known as "Remain in Mexico," faulting the White House for ending the program improperly. The Supreme Court upheld the decision, forcing Biden officials to restore a policy the president has called inhumane.

The Department of Homeland Security said in a statement that it is "taking necessary steps to comply with the court order, which requires us to reimplement [Migrant Protection Protocols] in good faith."

The program cannot resume without Mexico's consent, as the court acknowledged in its ruling, and administration officials said they are taking steps to address the concerns of the government of President Andres Manuel Lopez Obrador by setting up better access to legal counsel for asylum-seekers, exemptions for vulnerable migrants and other safeguards.

"Mexico is a sovereign nation that must make an independent decision to accept the return of individuals without status in Mexico as part of any reimplementation of [Migrant Protection Protocols]," the Department of Homeland Security statement said. "Discussions with the Government of Mexico concerning when and how [the program] will be reimplemented are ongoing."

The Mexican government "has made clear that it expects to see substantial improvements in how [the program] is reimplemented before it can make its decision," Nunez-Neto told the court.

U.S. District Judge Matthew Kacsmaryk in Amarillo, Texas, a Trump appointee, left open the possibility that the administration would try again to end the policy, and officials say they will release a plan soon that they hope will survive legal scrutiny.

The Trump administration used the Migrant Protection Protocols to return more than 60,000 asylum-seekers across the border to Mexico, requiring them to wait outside U.S. territory as their claims were processed in U.S. courts. The policy was conceived by Trump officials as a way to prevent border-crossers from being released into the United States -- and avoiding deportation -- by making asylum claims.

Mexican authorities want assurances that enrollees will have their cases completed within six months and receive "timely and accurate information about hearing dates and times, and other information about their cases," said Nunez-Neto, a reference to issues that plagued the program under Trump.

Trump used the threat of tariffs to force Mexico to accept a major expansion of the Migrant Protection Protocols in 2019 amid a surge of Central American families seeking protection. Border crossings fell sharply in the months that followed, but migrant advocates denounced the policy, documenting hundreds of rapes, kidnappings and other abuses suffered by migrants marooned in dangerous Mexican border cities.

President Joe Biden halted the program soon after taking office, and when border crossings skyrocketed this spring, Biden was asked if he made a mistake by moving too quickly to end it and other Trump-era controls.

"Rolling back the policies of 'Remain in Mexico,' sitting on the edge of the Rio Grande in a muddy circumstance with not enough to eat and -- I make no apologies for that," the president told reporters in March. "I make no apologies for ending programs that did not exist before Trump became president, that have an incredibly negative impact on the law, international law, as well as on human dignity."

The GOP-run states of Texas and Missouri filed suit against the administration in the Northern District of Texas, saying the abrupt repeal of the program led to a harmful surge in illegal immigration. The number of migrants taken into custody along the Mexico border this year is at the highest level in at least two decades.

The Migrant Protection Protocols fell out of use by the Trump administration in March 2020 as the coronavirus spread and officials began using an emergency provision of the public health code known as Title 42 to rapidly return border crossers without offering them a chance to request asylum.

The Biden administration has continued to use Title 42, while exempting unaccompanied minors, expelling more than 700,000 since January, the latest data show.

Biden officials told reporters that Title 42 will remain the primary enforcement mechanism for illegal border crossings, regardless of whether Mexico allows for the reimplementation of the Migrant Protection Protocols.

"We will continue to use Title 42 for all of the people who are amenable to it and who we can expel to Mexico or to other countries," said one administration official who spoke to reporters on the condition of anonymity under ground rules set by Homeland Security.

The officials said the administration is preparing a new memo to formally end the program but would not be able to move forward until the court injunction is lifted.

"Past experience has proven that this policy causes immeasurable harm to people seeking asylum every single day that it is in place," said Noah Gottschalk of the advocacy group Oxfam America, in a statement responding to the court filing. "With people's lives on the line, the Biden administration must move swiftly to lawfully end this policy before it can wreak even more havoc."

Mexico's Foreign Ministry said in a statement Thursday that it will continue talks with the Biden administration on migration, offering no indication whether it has agreed to restart the program.

Broad outlines of the reinstated policy come as the Biden administration has yet to develop the "humane" asylum system that the president promised during his campaign after quickly dismantling many Trump policies. Illegal border crossings have soared under Biden's watch, with record numbers of unaccompanied children and, in September, the arrival of about 15,000 mostly Haitian migrants at a camp in Del Rio, Texas.

Homeland Security said in a statement that it "remains committed to building a safe, orderly, and humane immigration system that upholds our laws and values."

Information for this article was contributed by Nick Miroff of The Washington Post; and by Elliot Spagat and Mark Stevenson of The Associated Press.