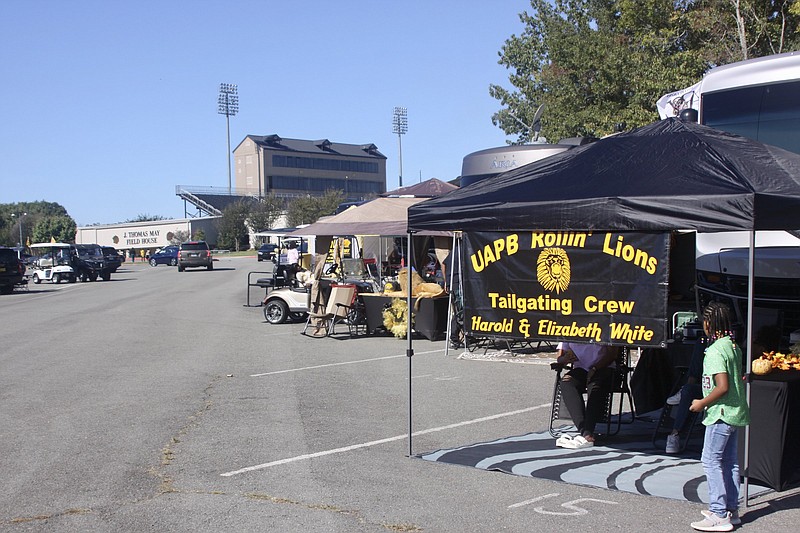 Tailgaters gather to celebrate homecoming Saturday morning at Simmons Bank Field before a matchup between the University of Arkansas at Pine Bluff and Southern University. (Pine Bluff Commercial/Eplunus Colvin)

Some call it "the aroma of homecoming."

Even with one's car windows rolled up, the smell of turkey legs and barbecue filled the air Saturday in Pine Bluff as homecoming was celebrated in any number of ways.

The city was hustling and bustling in the morning as homecoming festivities kicked off downtown Main Street with the city of Pine Bluff Homecoming Festival.

Mayor Shirley Washington, who was decked out from head to toe in her UAPB/AM&N attire, greeted visitors who came to partake of the downtown activities before the mid-afternoon game.

Because the university had canceled the traditional parade that was to take place on Saturday, Washington the city decided to fill that void after numerous telephone calls were made to her office.

"We were answering an outcry from citizens of Pine Bluff both young and old because they are accustomed to having a homecoming parade on Saturday morning," said Washington. "Last year, people understood that we weren't having a parade because we were in a different level of this pandemic. But then this year, since we were having a game and many events, many of the people asked why not a parade."

While Main Street was filling, across town at Golden Lion Stadium, the parking lot was bumper to bumper with traffic in eager anticipation of the game.

Patrons waited patiently to park and tailgate, an experience they missed last year due to covid-19.

[Video not showing up above? Click here to watch » arkansasonline.com/1017pbtailgate/]

Michelle White of Little Rock graduated from UAPB and said she was looking forward to getting together with people she hadn't seen in awhile.

"Homecoming means family and friendship and togetherness, something we were unable to do last year," she said. "With covid and so much death, so many lives gone, it's wonderful to be here and see everybody in good health and good spirit enjoying the moment."

Kevin Glover of Kansas City came back to his alma mater after being away for nearly a decade. He reunited with one of his good friends that he met while attending UAPB, Perry White.

White, who went to UAPB for two years then transferred to Southern University -- the team UAPB would play in a few hours -- chose to sport the clothing of latter of the two universities but said he was proud of all the historically black colleges and universities.

Washington said UAPB is an educational hub for not just southeast Arkansas but for the entire state, with students attending from all over the country.

Washington, who graduated with the last class of AM&N, proudly walked the streets embracing what homecoming was all about.

"People have come home for homecoming. People are endeared to Pine Bluff. They are endeared to UAPB/AM&N," said Washington. "We love this place. People who have left this place come from far and near because they love Pine Bluff, UAPB and the legacy that we have here." 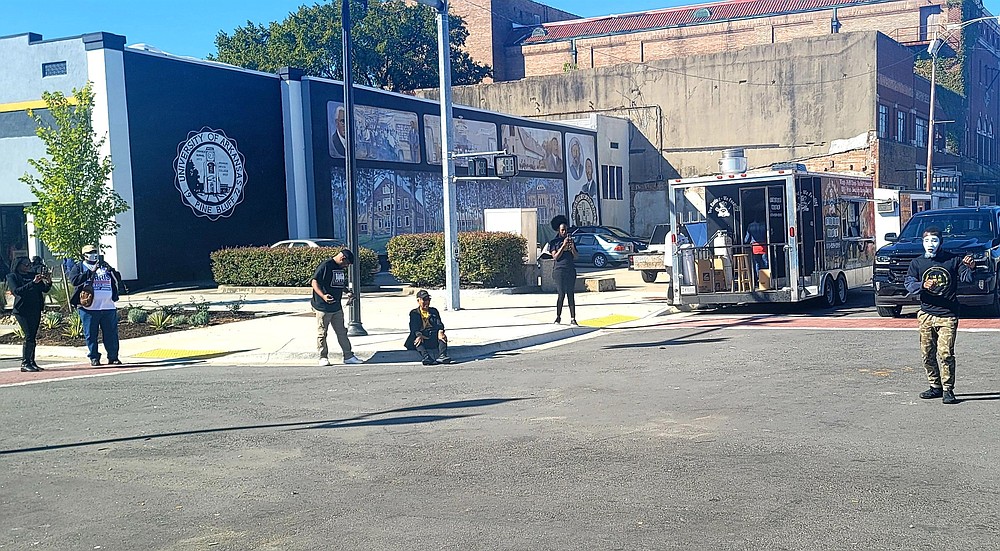 Pine Bluff Mayor Shirley Washington sits and watches a street performer along with other spectators during the city of Pine Bluff’s Homecoming Festival on Saturday morning. (Pine Bluff Commercial/Eplunus Colvin)