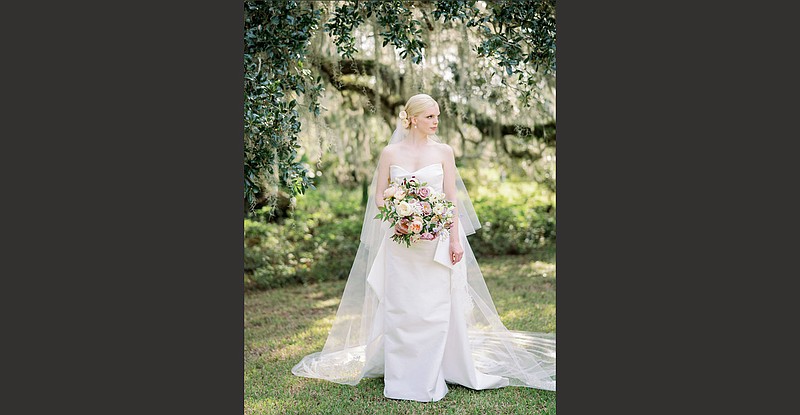 Parents of the groom are Katie and Kevin Reily of Chapel Hill, N.C. He is the grandson of the late Mary and Robert Burns of Denver and the late Margaret and Robert Reily of New Orleans.

The bride, who walked down the aisle with her father, wore a Monique Lhuillier strapless column gown of silk mikado. She carried a bouquet of roses, ranunculus, sedum, sweet William and Queen Anne's lace.

Lilah Brown of New York was her sister's maid of honor, and Chandler Leibelt of Durham, N.C., was matron of honor. Bridesmaids were Kathleen Reily of Chapel Hill, sister of the groom; Katherine Dumais of Little Rock; Lily Lawson of Dallas; Ellen Mallon of Houston; Hartley Mellick and Sabina Milbank, both of New York; and Blair Ondrey of Memphis. They wore moss green column gowns with thin straps and draped necklines and carried a smaller version of the bridal bouquet.

A reception was held at the Reily family's Marshdown on Bayou Liberty in Slidell, La. A cocktail hour was held at the pool house with music by Harry Hardin Zydeco Band from New Orleans. A tent next to the home was draped with fresh flowers and guest tables covered with lavender tablecloths were centered with arrangements of wedding flowers and dark fruit. Dance music was by BRW with Billy Kennedy from New Orleans.

The bride is a graduate of Southern Methodist University with bachelor's degrees in markets and culture and art history. She was recently with Christie's Auction House in New York as a global marketing manager for decorative arts and private and iconic collections.

The groom has a bachelor's degree in environmental studies and a law degree from Tulane University School of Law. He is an associate in corporate, finance and investments practice at King & Spalding LLP in Atlanta.

The couple will live in Atlanta after a wedding trip to Cape Town, South Africa.