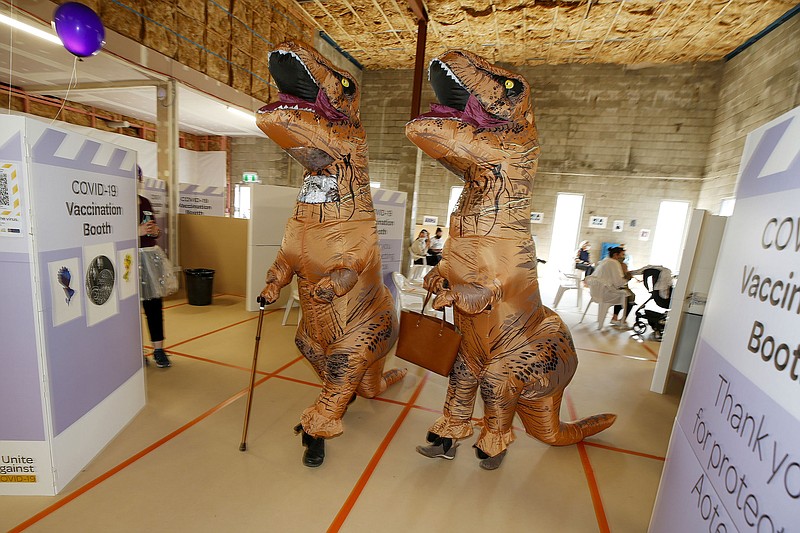 Allan Beverwijk and Patsy Beverwijka, dressed in dinosaur suits, arrive at a vaccination center in Whangarei, New Zealand, Saturday, Oct. 16, 2021. New Zealand health care workers have administered a record number of vaccine jabs as the nation holds a festival aimed at getting more people inoculated against the coronavirus. (Michael Cunningham/NZME via AP)

Coronavirus vaccinations will soon be mandatory for public service and health care workers in the Yukon Territory, government authorities there announced Friday, as the territory's next-door neighbors grappled with a spike in cases.

Alaska and the Northwest Territories, the province to the east of the Yukon, have "each dealt with widespread resurgence" of cases, Yukon Premier Sandy Silver said during a covid-19 briefing Friday. The Northwest Territories has the highest rate of active covid cases in Canada, according to national public health data.

In the Yukon, vaccination will also be mandatory for teachers and the staffs of some nongovernmental organizations that receive government funding, such as those that serve prisons and other congregate living settings.

Workers must receive both doses of vaccine by Nov. 30. Starting that day, the territory will also require residents to show proof of vaccination to attend public events such as theater performances and to enter recreational facilities such as gyms and community centers. However, access to grocery stores, banks and other places that provide essential services will not be dependent on vaccination status.

The Yukon Territory was the latest government at the provincial level to announce a program requiring proof of vaccination.

The deadline for federal employees to get vaccinated is Oct. 29, Prime Minister Justin Trudeau announced this month. That change approached as the United States announced Friday that it would lift border restrictions for vaccinated travelers on Nov. 8.

The Yukon had 109 active covid cases per 100,000 residents as of Friday, which is above the provincial average of 92, according to national public health data. Seventy-two percent of the territory's population was fully vaccinated as of Oct. 2, the latest data available from the Public Health Agency of Canada shows.

Yukon's vaccination rate is in line with the national trend. Seventy-six percent of Canadians were fully vaccinated as of Oct. 2, according to national data.

"Despite our high vaccination rate, we have seen covid-19 spread quickly and ruthlessly through our unvaccinated population," Silver said.

Ten people have died from covid in the Yukon, a territory of more than 35,800 people that is characterized by rugged terrain and remote communities.

New Zealand health care workers administered a record number of vaccine jabs Saturday as the nation held a festival aimed at getting more people inoculated against the coronavirus.

Celebrities pitched in for the "Vaxathon" event, which was broadcast on television and online for eight hours straight. By late afternoon, more than 120,000 people had gotten shots, eclipsing the daily record of 93,000 set in August.

It comes as New Zealand faces its biggest threat since the pandemic began, with an outbreak of the delta variant spreading through the largest city of Auckland and beyond.

Prime Minister Jacinda Ardern, who chatted with motorists at a drive-thru vaccination center in Wellington, initially set a target of 100,000 jabs for the day but increased that to 150,000 after the first target was met.

She also set a target of 25,000 shots for Indigenous Maori, whose vaccination numbers have been lagging and who have been hit hard by the latest outbreak.

Before the Vaxathon, about 72% of New Zealanders had received at least one dose and 54% were fully vaccinated. Among those ages 12 and over, the proportion was about 83% and 62%, respectively.

Singer Lorde beamed in from abroad, saying she couldn't wait to go back home to play a concert.

"I am the first person to admit that I find getting injections really icky, but ever since I was a kid, I have treated myself by going to the bakery after an injection, normally for a custard tart," she said. "So you could do that."

Russian authorities have tried to speed up the pace of vaccinations with lotteries, bonuses and other incentives, but widespread vaccine skepticism and conflicting signals from officials stymied the efforts. The government said last week that about 43 million Russians, or about 29% of the country's nearly 146 million people, are fully vaccinated.

Despite the mounting toll, the Kremlin has ruled out a new nationwide lockdown like the one early on in the pandemic that severely hurt the economy, eroding President Vladimir Putin's popularity. Instead, it has delegated the power to enforce coronavirus restrictions to regional authorities.

Some of Russia's 85 regions have restricted attendance at large public events and limited access to theaters, restaurants and other venues. However, daily life is going on largely as normal in Moscow, St. Petersburg and many other Russian cities.

Russia's daily death toll from covid-19 has exceeded 1,000 for the first time as the country faces a sustained wave of rising infections.

The national coronavirus task force Saturday reported 1,002 deaths in the previous day, up from 999 Friday, along with 33,208 new confirmed covid-19 cases, more than 1,000 higher than the day before.

Health Minister Mikhail Murashko acknowledged last week that medical facilities have come under growing strains and said authorities have offered retired medics who have gotten vaccinated the option of returning to work.

Overall, the coronavirus task force has registered more than 7,958,000 confirmed cases and 222,315 deaths -- Europe's highest death toll. The official record ranks Russia as having the fifth-most pandemic deaths in the world following the United States, Brazil, India and Mexico.

However, state statistics agency Rosstat, which also counts deaths in which the virus wasn't considered the main cause, has reported a much higher pandemic death toll -- about 418,000 people with covid-19 as of August. Based on that number, Russia would rank as the fourth-hardest-hit nation in the world, ahead of Mexico.

For much of the pandemic, New Zealanders have lived completely free from the virus after the government successfully eliminated each outbreak through strict lockdowns and contact tracing.

That zero-tolerance strategy failed for the first time after the outbreak of the more contagious delta variant began in August. Until then, New Zealand was slow to immunize its population. It since has been making up for lost ground.

Information for this article was contributed by Vjosa Isai of The New York Times; and by Jim Heintz and Nick Perry of The Associated Press.