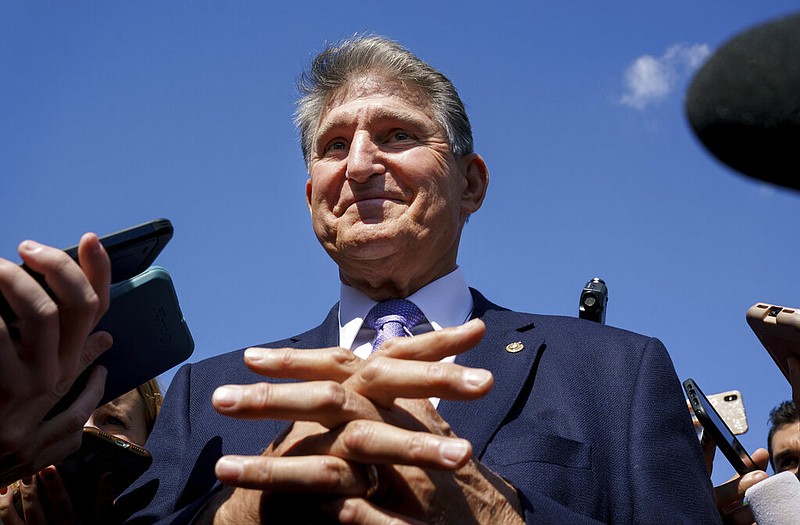 The fight revolves around the so-called Clean Energy Performance Program, which Democrats have proposed as a way to reward utilities that increase their clean energy supply by 4% each year -- while penalizing those that don't. Lawmakers have included the initiative as part of a still-forming, multitrillion-dollar tax-and-spending package that aims to advance Biden's broader economic vision.

But the emissions-reduction program has drawn fierce public and private opposition from Manchin, whose home state of West Virginia depends heavily on coal. The standoff has jeopardized Biden's pledge to halve emissions by 2030 -- and inspired a new flurry of last-minute policy proposals just two weeks before the president and other world leaders are set to convene the most important global warming talks in a quarter-century.

One of the ideas under consideration would establish a scaled-back, voluntary emissions trading system among aluminum, steel, concrete and chemicals manufacturers that would provide federal funding to help companies curb pollution, according to two people close to the negotiations.

But it remains unclear how, exactly, the program would be structured, and whether it would be sufficient to satisfy Democratic lawmakers who have demanded aggressive climate action, added the sources, who requested anonymity to describe the private discussions. Some in the party have taken the opposite approach from Manchin, fearing they risk squandering a generational opportunity to respond to the dire consequences of a steadily warming planet.

The tense talks in the meantime have added to the high political stakes for Biden as he prepares to travel to Glasgow, Scotland, for a United Nations climate summit next month. The Sierra Club, an environmental organization, stressed in a statement Saturday that Democrats needed to preserve the Clean Energy Performance Program or deliver investments in "other climate priorities to close the emissions gap and meet the president's international climate goals in the coming days and weeks as the U.N. climate negotiations near."

Even the president's top envoy for climate, former Secretary of State John F. Kerry, delivered a stark warning this week, stressing that a failure to adopt climate legislation promptly could undermine the United States at a time when it hopes to encourage other countries to take action.

The uncertainty around climate change reflects only part of the challenge facing the president's economic agenda, which remains mired in political disputes among Democrats on Capitol Hill. From its current, $3.5 trillion price tag to the proposed tax increases that would help finance it, the party's liberal and centrist factions remain at odds over its size and scope -- preventing lawmakers from forging ahead since their legislative ambitions require unanimity to prevail.

Talks over the total package continued into the weekend as Biden labored to broker an agreement with Manchin and another moderate holdout, Sen. Kyrsten Sinema, D-Ariz., who has demanded additional cuts. The two centrists have offered only scant indications as to the exact changes they seek, frustrating left-leaning Democrats, who have insisted in recent days that the party must spend ambitiously -- or face the political consequences in next year's congressional elections.

"This bill offers us a chance to fundamentally transform the relationship between the American people and their government," Rep. Pramila Jayapal, D-Wash., and other members of the Progressive Caucus, wrote in a letter Wednesday.

Many Democrats are already growing wary of the prospects of beginning their reelection campaigns before voters have felt the tangible impacts of either the infrastructure bill or the reconciliation package.

They will have to win over voters such as Eric Paez, a 41-year-old events planner who wants Democrats to deliver and has little patience for keeping track of the machinations on Capitol Hill standing in their way.

"I need to come home and not think about politicians," Paez, said, smoking a cigarette and waving to neighbors walking their dogs in the early evening as he headed home from work near a Pennsylvania child care center. "They should be doing what we voted them in to do."

With climate, some Democrats harbor sky-high expectations, hoping to address what they say are decades of neglect. Biden campaigned aggressively on taking major steps to address global warming during the 2020 presidential race, drawing a stark contrast with now-former President Donald Trump, who unwound federal emissions rules and withdrew the U.S. from a critical international carbon-reduction agreement.

To reach their goals, Democrats have tucked into their still-forming economic package a flurry of changes, including the elimination of dozens of tax programs that subsidize fossil fuels. Those efforts, championed chiefly by Sen. Ron Wyden, D-Ore., could accomplish significant improvements on their own -- perhaps by incentivizing clean energy and cutting power sector emissions by roughly 70%, he said, over the next seven years.

"The Clean Energy for America Act, because of the dramatic savings, the dramatic emissions cuts in the power sector, is the linchpin," stressed Wyden, the chairman of the tax-focused Finance Committee, referring to his section of the legislation.

Democrats' spending initiatives include other provisions aimed at slashing greenhouse gas emissions, including subsidies to expand charging stations for electric vehicles across the nation. But the most significant proposal is the Clean Energy Performance Program, an idea championed by lawmakers including Sens. Tina Smith, D-Minn., and Ed Markey, D-Mass., which targets power companies themselves.

Markey, for one, said in a recent interview that eliminating the program would undercut the president's pledge to reduce emissions by between 50%-52%, compared with 2005 levels, before the end of the decade. An analysis by Energy Innovation, a nonpartisan energy and climate policy think tank, found that U.S. greenhouse gas emissions otherwise would be 250 million-700 million metric tons higher per year in 2030.

In opposing the power proposal, Manchin repeatedly has pointed to its effect on hard-hit coal producers in his home state -- as well as his more general concerns about government spending. For weeks, he sought to shrink the total package perhaps by as much as $2 trillion -- frustrating other Democrats who believe that such cuts would force them to compromise their key goals, including on climate change.

The standoff has prompted a race behind the scenes to craft some alternative, ideally before the end of October, by which point Democrats hope to adopt the final bill along with a related, roughly $1.2 trillion infrastructure plan. A voluntary carbon trading program is one of the many ideas in the mix, according to a White House official, who spoke on condition of anonymity to describe the sensitive, private negotiations.

"We have to have real pollution reductions in the power sector. We can't just have voluntary programs and expect that's going to get us where we need to go," said Leah Stokes, a climate policy expert at the University of California, Santa Barbara.

White House officials are still looking at whether they can preserve the clean energy program by providing a way for coal and natural gas plants to keep operating for longer, according to three individuals. Calls continued into the weekend between White House aides and climate experts, according to one of these individuals, who said it remains unclear if Manchin even supports some of the newer ideas that the Biden administration has floated.

"We don't comment on the state of our negotiations with the wide array of Senators offering views about the Build Back Better agenda," White House spokesman Vedant Patel said in an email. "The White House is laser focused on advancing the President's climate goals and positioning the United States to meet its emission targets in a way that grows domestic industries and good jobs."

To get around Republican obstruction, Democrats are using a fast-track process known as reconciliation that shields legislation from a filibuster. That would allow it to pass the 50-50 Senate on a simple majority vote, with Vice President Kamala Harris casting a tiebreaking vote.

But it would still require the support of every Democratic senator -- and nearly every one of their members in the House. Democratic leaders and White House officials have been haggling behind the scenes to nail down an agreement that could satisfy Manchin and Sinema, who have been reluctant to publicly detail which proposals they want to see scaled back or jettisoned.

Congressional leaders aim to finish their negotiations in time to act on the reconciliation bill by the end of October, when they also hope to move forward on another of Biden's top priorities, a $1 trillion bipartisan infrastructure bill that would be the largest investment in roads, bridges, broadband and other physical public works in more than a decade.

"As with any bill of such historic proportions, not every member will get everything he or she wants," Sen. Chuck Schumer, D-N.Y., the majority leader, wrote to Democrats in a letter before the chamber's return Monday. "I deeply appreciate the sacrifices made by each and every one of you."

Information for this article was contributed by Tony Romm, Jeff Stein and Tyler Pager of The Washington Post; and by Emily Cochrane of The New York Times.