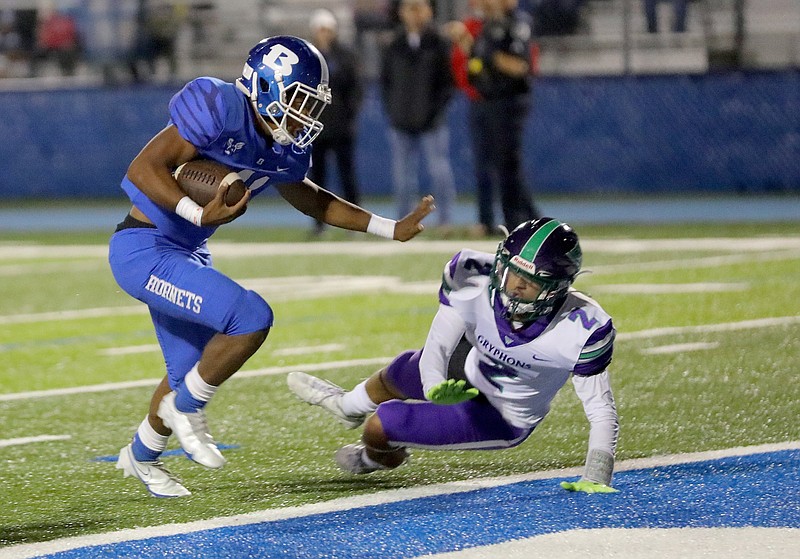 As the season has progressed, so has top-ranked Bryant.

That's not an ideal assessment for future Hornet opponents.

The 2021 season was set up to be somewhat of a rebuilding one for Bryant (6-1, 4-0 7A-Central). The Hornets were replacing 77% of their starters from last year, including 10 on defense, had to ease in a new quarterback and knew they'd confront a schedule dotted with teams looking to avenge years of beatdowns.

None of that has seemingly fazed the Hornets, who are playing like a three-time defending state champion that fully intends on winning a fourth.

"We've still got to keep improving, and the only way to do that is have everybody play their best when they're on the field. That's what we're asking of our guys, to give it everything they've got on every play."

James felt the Hornets played some of their best football for most of Friday night's 48-7 victory over Little Rock Southwest. Bryant scored at will early and had the game well in hand by the midway point of the second quarter, so much so that the Hornets played their backups for the entire second half.

But for James, it's about the developmental journey. Before the season began, he talked about wanting to see his team get better by the game. With such as young group, their continued advancement was paramount if the Hornets were going to etch their names even deeper in the state history books as a big-school powerhouse.

So far, those young guys have given James what's been asked.

"I thought we played really well in the Salt Bowl," James explained. "We played good in the second game against Marion, and then we went down to Longview [Texas] and played a great football team. We didn't play well in that one, and we got beat by just three points.

Coincidentally, those three teams, all of whom are ranked among the top 10 in Arkansas, will be sharing the same field with Bryant over the next three weeks before the playoffs start. But James feels the work the Hornets have put in ahead of time will help them in the high-profile games they're about to be take part in.

"We've got to learn from what we've done already this season," James said. "That's something we've really tried to hammer in with our kids, and I think they understand that.

Class 5A No. 1 Pulaski Academy got a scare in its clash against Maumelle when standout running back Joe Himon went down in the first quarter.

The Northwestern commit took a direct snap on first down from the Bruins' 25 and ran 14 yards before landing hard on his right shoulder and arm area while being tackled. He remained on the Hornet Stadium turf for several moments until he eventually got up and was assisted to the sidelines. Himon, who didn't return to the game, was wearing a sling on his right arm afterward.

But Pulaski Academy Coach Anthony Lucas believes the senior will be OK and noted that he's listed as day-to-day. The Bruins went on to win the game 42-14 behind a 433-yard passing, 4-touchdown effort from quarterback Charlie Fiser. Jaylin McKinney caught 12 passes for 193 yards and a score, and reserve running back Kenny Jordan added 99 yards rushing on 8 carries with 1 touchdown.

Fayetteville may have taken out two long-running marks by Bentonville with one victory over the Tigers on Friday night.

The Bulldogs came back from a 14-point deficit to win 42-34 and snap Bentonville's 35-game 7A-West Conference winning streak. The win also put Fayetteville (5-2, 4-0) in the driver's seat in the league with three games left in the regular season.

Bentonville (5-2, 3-1) has won four consecutive conference titles, but that run is in jeopardy after the loss. Fayetteville, which has won four games in a row since losing to North Little Rock on Sept. 10, does have two of its next three games on the road, but those contests are against teams with a combined 3-18 record.

Little Rock Central didn't play the way it hoped it would in a 41-7 loss to Cabot, but there was a noteworthy achievement that came out of the defeat for one of the nation's more historic programs.

Sophomore Hayden Kirby became the first female kicker to score in a game for the Tigers. She knocked in the extra point after running back Westley Johnson scored on a 1-yard run with 5:20 left in the fourth quarter. Kirby, wearing No. 61, came on and sent the extra point right down the middle despite an extremely high snap and windy conditions.

The touchdown also stopped a string of 11 consecutive scoreless quarters for Central (0-7, 0-4 7A-Central), and Kirby's kick gave the team their most points in a game since scoring 20 in a loss to Bentonville West on Sept. 10.

Junction City found itself mired in a rare three-game losing streak but emphatically played its way out of it against Parkers Chapel.

The Dragons had three players each finish with more than 100 yards of offense in a 60-28 blowout over Parkers Chapel. Jamal Johnson ran just 6 times for 109 yards and accounted for 5 touchdowns for Junction City (3-4, 1-1 2A-8), which had been outscored 131-46 in consecutive losses to Haynesville (La.), Beebe and Fordyce. That three-game slide was the Dragons' longest such skid in more than 20 years.

Jordavion Williams ran for 118 yards on 16 carries while Payton Willeford totaled 197 yards and three touchdowns for Junction City, which will face Hampton and Bearden in its final two conference games.

Southside Batesville has effectively gashed teams out of its Gun-T offense all year, and it did so again Friday by gouging Central Arkansas Christian with it.

A 480-yard rushing performance pushed Southside Batesville (5-2, 3-1 4A-2) to a convincing 59-19 rout in a game it had to have in order to stay within striking distance of league-leader Stuttgart. The Southerners trailed 7-6 late in the first quarter before scoring 30 of the next 36 points to take over.

Jacob Dunne scored three times and Nick Risner had two touchdowns for Southside Batesville, which had five different players score. The victory kept the Southerners a game behind Stuttgart (6-1, 4-0) in the conference standings. The Ricebirds won 21-18 when the teams played three weeks ago.

Nashville has been used to dishing out pain to opposing teams for years. In 2021, it's been the complete opposite.

The Scrappers lost their fourth consecutive outing after dropping a 26-21 contest to Ashdown. The quartet of defeats have been by an average of nearly 29 points for Nashville (2-5, 0-4 4A-7), which hadn't lost four games in a row since 2011.

The setback to the Panthers also kept the Scrappers winless in the 4A-7, tying that same 2011 team for the longest starting stretch to a conference season without a victory. Also, Nashville hadn't lost five times in a year since 2013 when it finished 6-5.