Nation cautious of shortages during crucial Christmas shopping period by The Associated. Press | October 17, 2021 at 1:55 a.m. 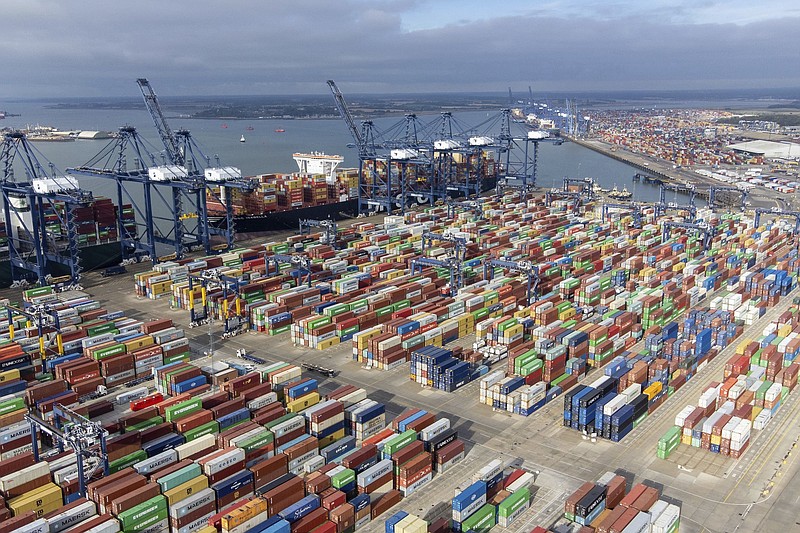 Thousands of shipping containers at the Port of Felixstowe, south east England, Wednesday Oct. 13, 2021. A logjam at the U.K.'s busiest commercial port ratcheted up concerns Wednesday that the country could see an array of shortages in the crucial Christmas trading period, including of toys and food. (Joe Giddens/PA via AP)

LONDON -- A logjam at the U.K.'s busiest commercial port ratcheted up concerns last week that the country could see an array of shortages in the crucial Christmas trading period, including of toys and food.

Worries have mounted over recent weeks that the U.K.'s economic recovery is being hobbled by widespread shortages, which have been most clearly seen in long lines at gas stations and some empty shelves at supermarkets.

The disruption is clearly visible at the east England port of Felixstowe, the U.K.'s largest commercial port. A bottleneck of containers at the port, which deals with 36% of U.K. freight container volumes, has been blamed on a shortage of drivers and prompted shipping company Maersk to divert some of its biggest vessels.

Peter Wilson, managing director at Cory Brothers shipping agency, said the U.K. has a "significant pinch point" around truck drivers and the demand on them to move goods from ports.

"That's a really significant issue for us here in the U.K.," he told BBC radio.

Asked if it will affect Christmas, he said it has the "potential," but stressed that the supply chain "will not fail in the U.K."

However, he said there is potential that some items may not be available nearer to Christmas, including toys and food.

While other countries around the world have also suffered significant delays, Britain is facing particularly acute problems at the moment, with the number of truck drivers in particular way down. The causes are widespread, but it's clear that the combination of Britain's departure from the European Union exit and the pandemic prompted many EU workers to leave the U.K. and head home.

Andrew Opie, director of food and sustainability at the British Retail Consortium, said the congestion at Felixstowe is "yet another unwanted side effect" of the driver shortage and that "further disruption may be unavoidable."

Britain's Conservative government has sought to dampen down on fears there will be a shortage of many goods at Christmas and says it is accelerating efforts to train more truck drivers and is offering thousands of short-term visas to foreign drivers, though few appear to have taken the offer up.

The shortages are coming at a time when the economic recovery is already losing momentum despite the widespread lifting of coronavirus restrictions as supply chain issues took their toll.

While the Office of National Statistics reported the economy managed some modest growth in August as bars, restaurants and festivals benefited from the first full month without coronavirus restrictions in England, the 0.4% increase was slightly lower than anticipated. The agency also revised down July's figure from 0.1% growth to a 0.1% decline as a result of weaker data from a number of industries -- highlighting the choppy nature of the economic recovery.

Earlier this year, there had been expectations that the British economy would have recovered all its covid-19-related losses by the end of this year. But that now remains open to question following the recent loss of momentum and the mounting supply chain issues.

As of the end of August, the British economy remained 0.8% below its pre-coronavirus pandemic level of February 2020.

Also set to weigh on growth in the coming months are rising inflation, low productivity levels, higher taxes and an uncertain covid-19 backdrop heading into winter.

The International Monetary Fund forecast Tuesday that the U.K. will grow by 6.8% this year, more than any other Group of Seven industrial nation, and by a still-high 5% next year. However, the British economy experienced the worst recession out of all G-7 members in 2020, contracting by 9.8%.