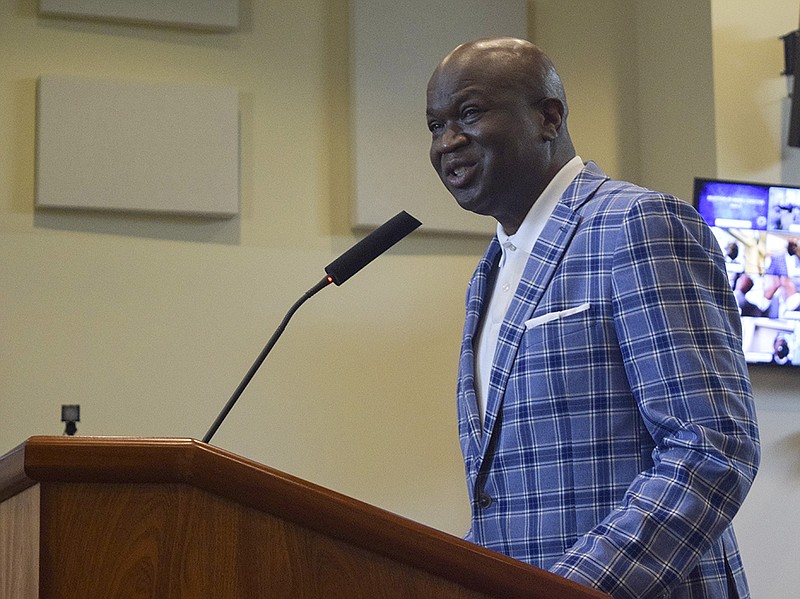 Virgil L. Miller Jr., the newly appointed representative for Ward 1 on the Little Rock Board of Directors, told the Arkansas Democrat-Gazette that he plans to run for a full four-year term of his own in the November 2022 election.

"I absolutely plan on running for a full term," Miller said by phone Thursday.

In a vote of board members during a special called meeting Wednesday, Miller was selected to fill the remaining term of the late City Director Erma Hendrix, who died in office last month at age 91. She had served as Ward 1 representative for more than a decade.

Miller won out over a field of 19 other candidates who applied to replace Hendrix. Board members narrowed the group to eight finalists earlier this month.

According to its present boundaries, Ward 1 encompasses the downtown area and nearby communities. The seat is likely to attract significant interest from aspiring city board members during the 2022 election cycle. As the incumbent in 2018, Hendrix defeated eight challengers.

Miller, 68, works as the group Community Reinvestment Act director for Arvest Bank Operations in Little Rock, a position he has held since December 2013. Before that, he worked for Metropolitan National Bank for 13 years, according to his resume.

He noted that he works for Arvest Bank Operations, the bank's holding company, differentiating it from the bank itself.

The Community Reinvestment Act, a 1977 federal law, requires banks to meet the credit needs of their markets, including markets considered low- and moderate-income, Miller said. His role is to make sure the bank stays in compliance with the regulation, he said.

Miller's parents met because of what he called "the Highway 365 romance," with his mother hailing from Wrightsville and his father from Jefferson.

Though he was born at Fort Bragg, N.C., when he was a kid Miller's family moved to Berkeley, Calif., according to a 2003 profile published in the newspaper.

His aunt, the late Maudelle Miller Shirek, was an influential East Bay activist and politician who served on the Berkeley City Council for years.

Miller lived in California from the second grade until his first semester of seventh grade, at which point his family moved back to the Wrightsville area.

"You can imagine the culture shock I had moving from Berkeley, Calif., to a house on a highway in rural Arkansas," he said.

He recalled it was the first year of integration. Miller was one of just seven Black students in the seventh grade at Fuller Junior High School, he said.

"I'd never seen anything like that in my life," he said.

Miller had never embarked on a political campaign before seeking the Ward 1 seat left vacant by Hendrix's death.

He recalled friends reminding him, "Virgil, you said you would never run for political office because, you know, it was something you just didn't want to get involved in."

Nevertheless, having gained skills and experiences working in his field of community development for more than 40 years, Miller described how his perspective changed.

He said he "began to think, quite frankly, that it was selfish of me" to not share what he learned in service of people and community.

Last year, he was thinking out loud about running for the Ward 1 seat but had made up his mind not to run against Hendrix if she chose to seek another term in 2022, Miller said.

Acknowledging that he had been comfortable with his previous role as a well-liked figure in the community, Miller said, "I didn't need to do this, but there was a call, quite frankly, and it might've been from my Aunt Maudelle [to] tell you the truth, from her grave, and just the legacy of the Millers, period, that we have a spirit of service."

Asked about the issues he wants to work on during his time on the board in the interim period before next year's election, Miller described three principal issues he said are important to people in the ward.

He said people want to feel safe at home, work and school, as well as when they go out for entertainment. Second, Miller cited infrastructure in the ward, and finally mentioned affordable-housing opportunities.

"My background certainly has given me knowledge and skills in regard to how to develop and work with people that are creating affordable housing opportunities for folks," he said.

Abandoned housing and weed-covered lots can be seen in abundance in the ward, Miller said, based on his observations as a resident.

Miller supported the recent unsuccessful sales-tax proposal spearheaded by Mayor Frank Scott Jr. and served as one of dozens of honorary committee members for the "Rebuild the Rock" campaign.

The tax increase, which would have added a net five-eighths percent (0.625%) to the local rate, was defeated in a Sept. 14 citywide referendum.

Miller said he thought it was "extremely important" to maintain the revenue from a three-eighths percent (0.375%) sales tax voters had approved in 2011. The tax is scheduled to sunset at the end of this year.

He said the three-eighths percent tax rolling off "is certainly going to have to be addressed, I believe," and suggested he will work with colleagues at the city to understand what the effect will be going forward.

As of Thursday, Miller said he had not been formally sworn in. He was working with his family to arrange a swearing-in and said his preference was to get sworn in before the city board's upcoming meeting Tuesday.