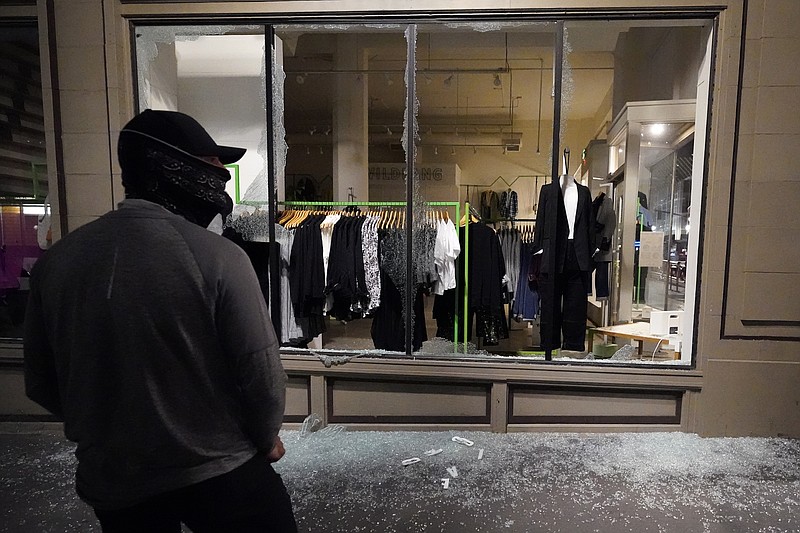 FILE - In this Nov. 4, 2020, file photo, a man stands in front of a broken display window at a retail store during protests in Portland, Ore. Police in Portland say they believe a new state law prohibits officers from directly intervening when people smash storefronts and cause mayhem. The measure passed this year prohibits the use of crowd control methods like pepper spray and rubber bullets &quot;unless use of force is otherwise authorized by statute.&quot; (AP Photo/Marcio Jose Sanchez, File)

Portland Police Bureau officials say that's because of legislation passed by Oregon lawmakers this year, which restricts the tools they can use to confront people vandalizing buildings and causing mayhem.

"The reason that we did not intervene goes back to what we talked about last month with House Bill 2928 and the restrictions placed on us in a crowd control environment," KOIN reports that Portland Police Lt. Jake Jensen said Thursday in a neighborhood meeting.

Residents frustrated by the latest round of destructive demonstrations Tuesday questioned whether that meant anything goes now in Portland.

"Does that mean we are now like a lawless city?" Linda Witt asked during the meeting with police. Jensen replied saying people can still face consequences later.

The legislation in question is House Bill 2928, which prohibits the use of things like pepper spray and rubber bullets for crowd control. However there is an exception -- when the circumstances constitute a riot and if the officer using the chemical incapacitant reasonably believes its use is necessary to stop and prevent more destructive behavior.

Portland Police Sgt. Kevin Allen said officers have been made aware of the "potential implications" of the legislation and that it's being analyzed by the city attorney's office.

"Until we have some clarity on the bill, we have to follow the most restrictive interpretation of it," Allen said.

Mayor Ted Wheeler's office didn't respond to multiple requests for comment Friday. Neither did lawmakers of the Democratic legislative caucuses of the Legislature, which is controlled by the Democratic Party.

Portland has seen ongoing, often violent protests since the murder of George Floyd by police in Minneapolis. Some activists have complained that the police have been heavy-handed in their response.

Authorities say although police did not directly intervene, officers did give direction to disperse over a loudspeaker and a Mobile Field Force moved in, at which point the crowd splintered.