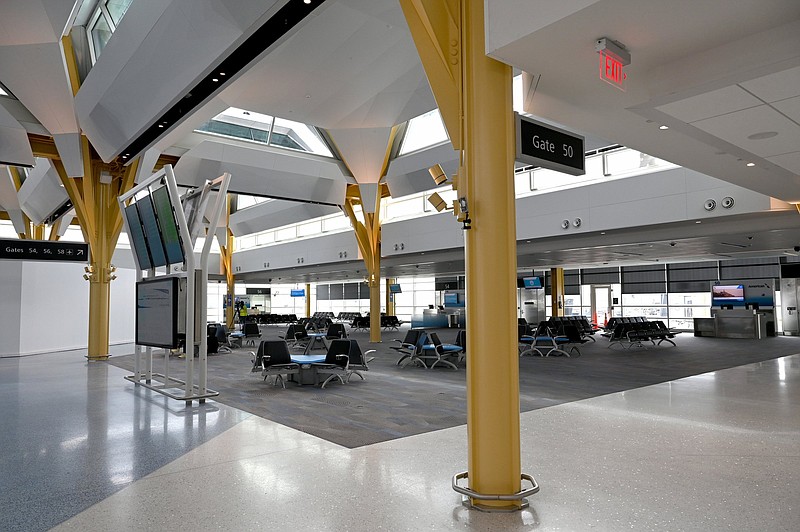 The new concourse at Reagan National Airport, a replacement for the dreaded Gate 35X, is seen earlier this year. The airport is unveiling new security checkpoints Wednesday. MUST CREDIT: Washington Post by Katherine Frey

WASHINGTON -- The public got its first look last week at new security checkpoints set to open next month at Reagan National Airport -- an upgrade that officials hope will speed screening times and ease congestion in time for the holiday travel season.

The concourse and security screening areas are part of Project Journey, National's first major upgrade since 1997 -- the year terminals B and C opened in a $450 million project that added more than 1 million square feet to the airport. The price tag for the project is estimated to be $1 billion, funded through the sale of bonds and by fees that passengers pay when purchasing airline tickets.

Twenty years ago, the Sept. 11 attacks changed how people navigate air travel. But airports at the time were not designed to accommodate the more stringent security screening requirements put in place in the aftermath of the attacks, leaving authorities scrambling to find space for TSA checkpoints and personnel.

Project Journey, airport officials said, will change that at National.

For example, once the project is complete, ticketed passengers will be able to move between terminals B and C without having to board a shuttle bus or repeat trips through airport security.

The checkpoints are set to open Nov. 9 and will be housed in separate 50,000-square-foot buildings across from terminals B and C. Airport officials originally had planned to open the checkpoints ahead of the new concourse, but construction issues delayed the project.

TSA Administrator David Pekoske said the checkpoints will offer both a "world-class screening experience and a world-class passenger experience."

Even so, its dubious legacy was still on the minds of many who attended last week's event, with Potter referring to 35X as a "mosh pit of a hold room." A large poster that greeted guests declared "No More 35X!" with a giant red "X" superimposed on a lone passenger.

"This is exciting," Warner said. "The only thing less efficient than Congress was Gate 35X."

Elected officials also used the ribbon-cutting as an opportunity to emphasize the importance of passing the infrastructure bill that is pending in Congress, noting that it includes $25 billion for airports.

The new building may offer faster screening, but it also means the end of public access to National Hall, which afforded visitors views of the airfield and the Potomac River. The glass-enclosed hall, with its soaring yellow beams and columns, also is home to popular eateries such as Ben's Chili Bowl, Legal Seafood and Chick-fil-A. Only ticketed passengers will have access to the space.

Many features in the new spaces mimic those in other parts of the airport. The new concourse features six Jeffersonian domes and beams and colors painted in the same yellow as those in the original B and C terminals. Similarly, the buildings that will house the new checkpoints have the same yellow accents. High ceilings and hundreds of windows give the spaces an airy feel.