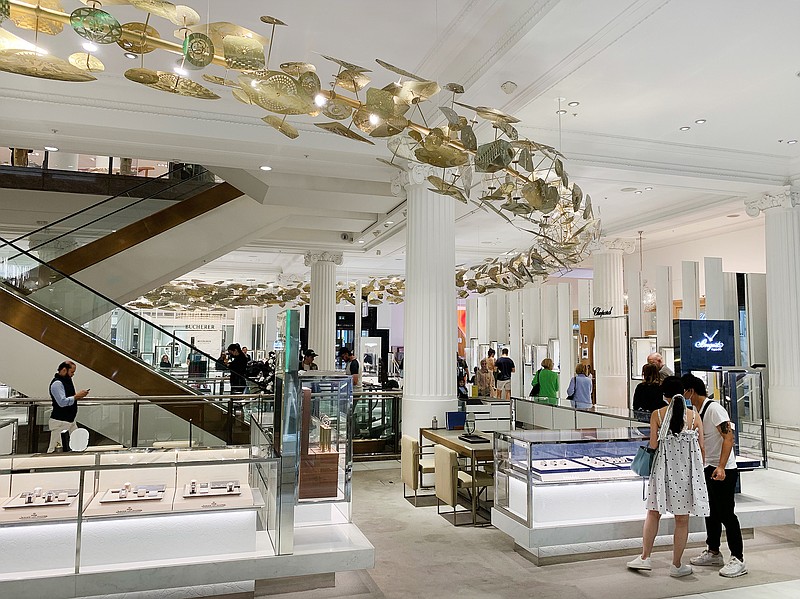 Sleekness and elegance pervade the jewelry floor in the Selfridges store on Oxford Street in London. (The Washington Post/Nancy Nathan)

Andrew Lloyd Webber's got nothing on Harry Gordon Selfridge.

Selfridge was the American who shook up the world of retail — and London's social starchiness — in 1909, with the founding of the great Oxford Street luxury store, Selfridges. He is still known as a master of creating drama ... just like Lloyd Webber, today's king of the London musical.

Lloyd Webber's magic was fresh in my mind when I toured the showroom floors of Selfridges during a recent three-week visit to London. I had seen his two shows now in West End theaters, "The Phantom of the Opera" and the just-opened "Cinderella," both full of stagecraft and splendor. When I witnessed similarly theatrical touches around every corner at Selfridges, I was reminded of how surprises create drama.

I was there at the suggestion of a London friend who asked an unexpected question after listening to me describe an itinerary filled with cathedrals and walking tours: Why not tour Selfridges? My friend is a certified Blue Badge tour guide — the official British guide designation — and she introduced me to a fellow guide, John Sheahan, who works as a Selfridges concierge. Walking through the store with him — a favor performed in an unofficial capacity — was a little like visiting a favorite cathedral and seeing glorious carvings you'd never noticed before. Turns out you just need to know how to look.

Harry Gordon Selfridge left Chicago's Marshall Field's, already having made his first fortune, and in 1906 came to London. He rolled the dice in London at a time when stores chose who would be allowed to enter. He was appalled by that rigidity, and, at the time, British society did not appreciate his notion of change.

Newspaper ads with specially commissioned drawings. Grand display windows, with curtains drawn as on a stage. Toilets for female customers. All unheard of.

Harry, nicknamed "Mile a Minute," always wanted to have the next thing. Just four months after the store opened in March 1909, on the then-unfashionable end of Oxford Street, his staff was surprised to learn he had rushed to the English coast to make a deal to display the Bleriot plane that had just made history flying across the English Channel. It was installed in the store's ground floor, and 150,000 people filed through in four days.

In 1925, Harry created another sensation when he got the inventor of an early version of television, a moving silhouette, to bring it in. He also capitalized on other novelties, installing a soda fountain that drew the flappers of the 1920s and staging pogo-stick demonstrations on the store's roof. According to John, it's Harry's spirit of playful innovation that provides the store's touchstones: change and fun.

So he would be proud of the electricity I felt, though I'm pretty much a nonshopper, on my three visits there in September. I'd been told that many people come simply to walk through and enjoy the show, not looking to buy. 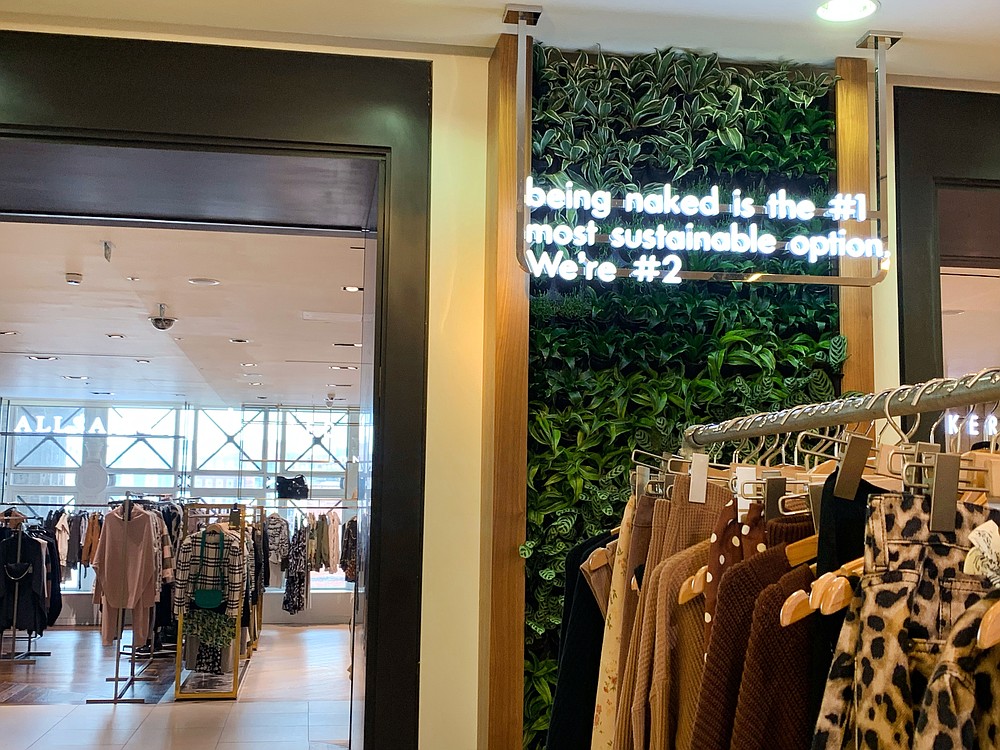 The humorous slogan — “Being naked is the #1 most sustainable option. We’re #2,” promotes Selfridges’ pledge to make shopping more sustainable. (The Washington Post/Nancy Nathan)

Maybe you enter the store through one of the side doors to the Foodhall, where you're overwhelmed by its lusciousness. If you also happen to need a dozen Old Cotswold Legbar pastel-shelled fresh eggs, bingo!

Or maybe you enter through the main door of the store, designed by the same architect who built Marshall Field's and Filene's in Boston and Wanamaker's in Philadelphia. The door is decorated with bronze sculptures and topped by the iconic bronze and blue enameled Queen of Time standing as if on the prow of a ship, supporting a huge round clock that still reigns over Oxford Street. Like those of most department stores today, the front door opens right onto the perfume counters. That was Harry's idea, to offset the effect of the horses outside in the street.

My behind-the-scenes walk through the store almost had me seeing it through Harry's eyes, the way it seems the current staff do, judging from their constant references to him and the chances he took. "Unconventional is part of our DNA and we love to take risks," Managing Director Andrew Keith told me.

Examples abound, such as its newest brand, "Resellfridges." The store is one year into a five-year sustainability drive, and it is selling secondhand clothes, even in the kids' department. (Don't think "Second Hand Rose," because these duds are high-end and gently used.) Neon lights read: "Being naked is the #1 most sustainable option. We're #2." There's also a rental department, with clothes you can lease from four to 20 days. And in the shoe department, secondhand Nikes are partnered with delicate kitten heels by a London designer to make a very fancy combo.

I returned to the store on a Sunday to go top to bottom, back to front, on my own, so I could apply the touring skills I had learned. Harry's watchword, letting customers browse, letting them touch the goods (new to shoppers in his day) without being approached, was in full force that day, at least for me.

Top floor, teeming with families. A giant-size floor keyboard more than 20 feet long, even longer as it curls up and around at the ends like a spool of film, had feet prancing all over it, the cacophony adding a nice Sunday feel to the floor. It's similar to the keyboard Tom Hanks's feet played in "Big," but it's much longer and bordered by giant stuffed polar bears and giraffes. Like the one in the movie, the keyboard at Selfridges is owned by FAO Schwarz. (The store-within-a-store here is actually larger than its New York home base.)

I had learned that negotiations over concessions for sections of the store — by companies such as FAO Schwarz, Tiffany, Van Cleef & Arpels, Chanel and so on — can last months, in an effort to assure there's something special for Selfridges in the bargain. The fit has to be in keeping with the way Selfridges sees its identity, the "Selfridges experience."

Third floor, ladies' lingerie. A sign reads "Agent Provocateur" above a faux shop window full of things in red and black that you probably don't want to look at with the kids. Two floors down, things get lively in a different way, with a Harry-style feature unique in the world's stores: a skateboard bowl in a big wooden cage, open to all. And nearby, pegged to the new Bond film ("No Time to Die") showing in the cinema inside the store, is a huge black custom Land Rover Defender.

John had pointed out what he called the elaborate "architecture" around such displays, which are not unlike stage sets. I noted the lighting, the artificial palm trees, the clouds overhead and the 007 music that helped set the scene. 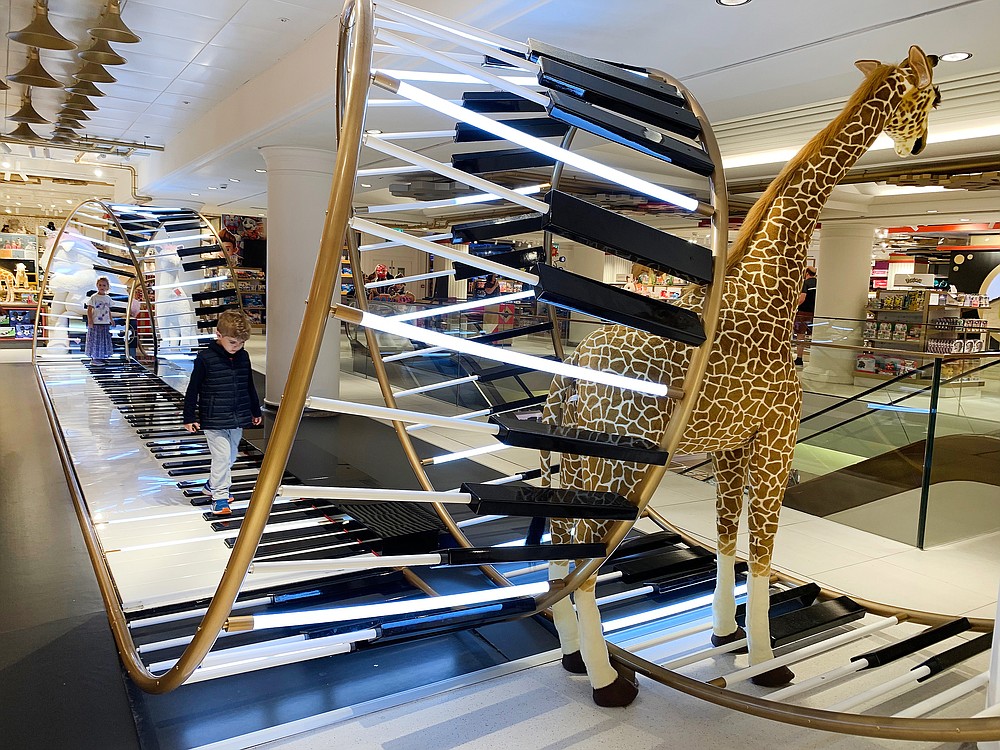 A floor piano installation provides customer entertainment in the Selfridges store on Oxford Street in London. (The Washington Post/Nancy Nathan)

The store has provided a backdrop for plenty of real-life drama, too. Americans in London knew that the store had a steel frame that afforded shelter during Nazi bombings. But the most important benefit to the Allies was provided in 1943, when the basement of that back half of the store — a 1930s addition to the 1909 structure — housed a huge new computer called Sigsaly, which scrambled the phone calls among London, Washington and commanders in the field, including those about the D-Day landings. There's a drawing in the store's archives of the conference room where Winston Churchill came for calls.

Its first floor is home to luxury jewels and handbags, but the real gem for royal watchers sits almost unnoticed over to one side; I saw it only because John pointed it out. It's a small display of the simple Launer handbags, in the Traviata style, favored by the queen. Available in a variety of finishes and colors, the bags cost about $2,600 each.

As I wended my way up and down the escalators, back and forth on five floors, noting the soundtrack changes, the decorations hanging from the ceilings, I spotted restaurants tucked in here and there, including some rotating pop-ups. There's the Hive, which specializes in honey recipes and has its own bees just outside the window, and a brasserie where an enormous Damien Hirst sculpture of a crystal Pegasus flies overhead.

The oldest Selfridges restaurant, which I tried myself because I'd kept hearing it cited as a London landmark, is the Brass Rail deli. I liked its signature "salt beef" on rye. (Corned beef, to you and me.) They'd be crazy to change that!

The best way to prep for a tour of your own? Watch the British production "Mr. Selfridge," which aired for four seasons on PBS' Masterpiece. That will give you a good bit of (albeit fictionalized) history. Two highly respected London companies that offer customized guided tours — whether your interest is specifically in the city's shopping areas or more general — are Guide London and Questa Travel, the company operated by the Blue Badge friend who arranged my Selfridges visit. Additionally, the store itself will arrange tours with advance notice.

After my visits, I came around to thinking that touring London isn't just about Westminster Abbey and St. Paul's. Even without a personal tour guide, you might add an enjoyable hour or two at the current queen of Oxford Street, the experience known as Selfridges.

Above all, pay attention to the architecture.