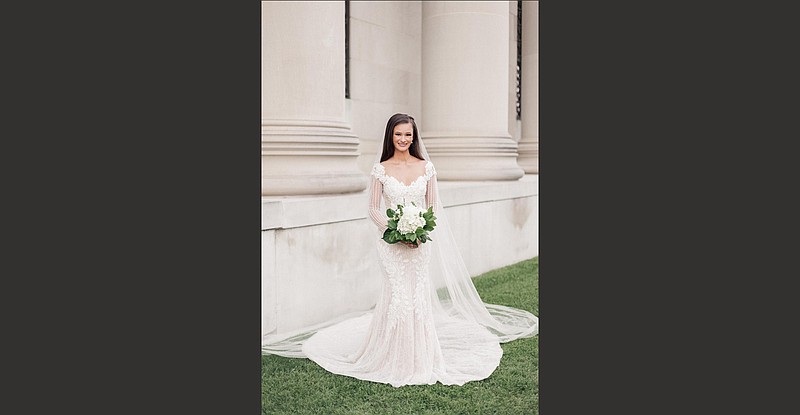 Parents of the groom are Kendall and David Billows of Rome City, Ind., and Debbie and David Dudley of Murrells Inlet, S.C. He is the grandson of Freida and David C. Dudley Sr., the late James David Goodson, the late Durie Lee Goodson and the late Betty Jo Elmore Tedder.

The bride, escorted by her father, wore a long sleeve gown by Dany Tabet embellished with pearls and floral appliques. She carried a bouquet of white roses, cattleya orchids and a cascade of dendrobium orchid tendrils.

The bride's maids of honor were her sisters Stevie Gibbs of Fayetteville and Liza Gibbs of Little Rock. Bridesmaids were London Hall and Ashley Jolly, both of Fayetteville; Hailey Merlo of Austin, Texas; Kelly Richardson of Cincinnati; Julienne Thomas of Little Rock; and Rebecca Roberts of Chicago. They wore black gowns in the style of their choice and carried bouquets similar to the bride's.

A reception was held at Chenal Country Club. Guest tables held a mix of tall and short arrangements of roses, orchids and pampas grass in neutral shades. Tall flowering faux trees were in each corner of the ballroom.

The bride graduated with bachelor's degrees in French and English from the University of Arkansas and is a high school educator at Little Rock Christian Academy.

The groom has a bachelor's degree in architecture from the University of Kentucky and is a financial adviser at PNC Bank.

The couple will make their home in Little Rock after a honeymoon in Belize.