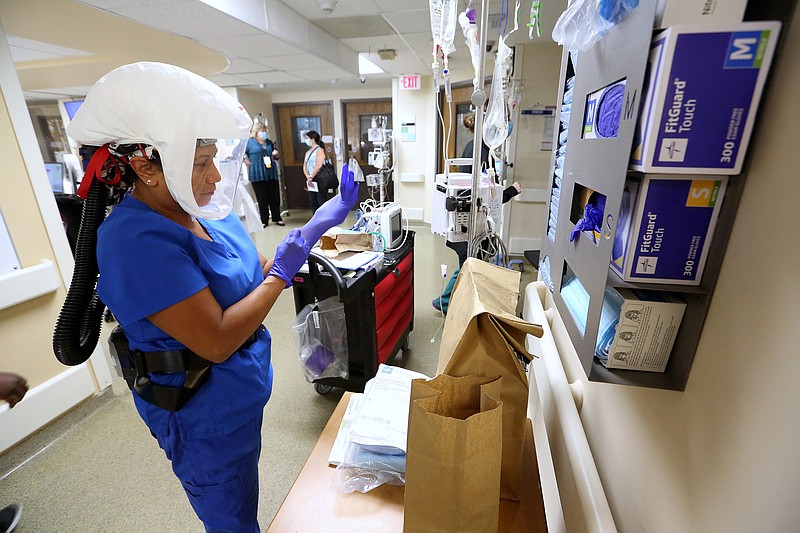 ​​​​​The numbers of covid-19 patients who were in Arkansas hospitals, on ventilators and intensive care all fell Monday as the state posted its smallest daily increase in cases in almost four months.

The state's death toll from the virus, as tracked by the Department of Health, rose by two, to 8,202.

It was the smallest daily increase in the toll since July 20.

The state's case count grew by 142, the smallest one-day rise since June 21.

Already at its lowest level since July 7, the number of covid-19 patients in the state's hospitals fell by two, to 460, after not changing a day earlier.

The number on ventilators, at its lowest level since July 20, also fell by two, to 131.

After rising a day earlier, the number who were in intensive care fell by 19, to 211, its lowest level since July 11.

The number of intensive care unit beds in Arkansas hospitals that were unoccupied rose by seven, to 156.

People with covid-19 made up about 21% of all the state's patients in intensive care, down from 22% a day earlier.

Due to slowdowns in testing and reporting, the state's case increases generally go down on Sundays and Mondays.

Still, the increase on Monday was smaller by 75 than the one the previous Monday.

It was just the second daily increase since June 21 that was below 200.

Already at its lowest level since the week ending July 7, the average daily case increase over a rolling seven-day period fell Monday to 573.

With recoveries and deaths outpacing new cases, the number of cases in the state that were considered active fell by 617, to 5,952.

It was the first time the number had been below 6,000 since July 8.

Meanwhile, at 1,544, the increase in vaccine doses that providers reported administering was larger by 349 than the one the previous Monday.

After falling the previous two days, the average number of doses administered each day over a rolling seven-day period rose to 5,604.

Of the most recently reported doses, about 33% were first doses of the Pfizer or Moderna vaccines or the single-shot Johnson & Johnson vaccine.