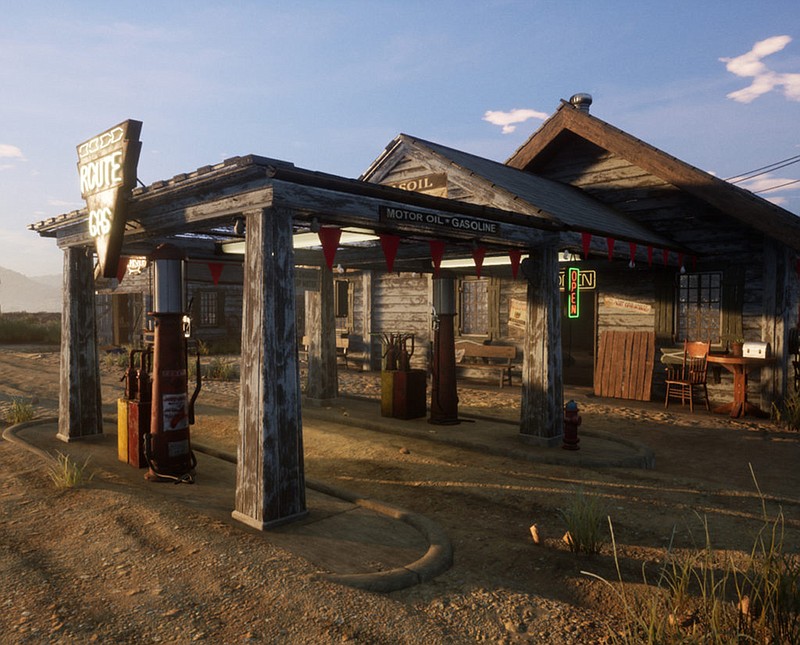 "Gas Station Simulator" is the latest game from Poland-based Drago Entertainment that lets you ... have a job?

Apparently growing more and more popular, simulators are an odd genre because they often involve mundane, repetitive tasks that in the real world would just be considered work. People normally play games for fun when they're not working — so why come home from work, then get on a computer or console and pretend to work?

Simulators have been around for decades, seen early in use as trainers for a variety of rather technical jobs, such as flight simulators and city-building simulators, with varying degrees of realism.

Some are realistic to the point that you could play certain flight simulators and actually learn to fly commercial airliners. And some are just absurd, like 2014's surprisingly well-received "Goat Simulator," which promised the latest in goat-simulation technology. Some can be surprisingly relaxing, such as "Farming Simulator" or the various hunting simulators.

"Gas Station Simulator" offers stress and retail hell rather than relaxation, and it does a pretty good job of making that pretty fun.

The game starts with the main character pulling into a boarded-up and rundown highway gas station appropriately named the Dust Bowl. You inherit the place from a generous uncle who, as it turns out, seems to have some shady side businesses going on and later starts hounding you to repay his generosity.

"Gas Station Simulator" is essentially a series of mini-games that complete various tasks, such as refueling cars, checking people out at a cash register, painting walls, cleaning floors and picking up the garbage. The better you are, the happier customers become, which means more customers show up, which means you have to work even faster, and soon the game starts spiraling a bit out of control.

It takes only a couple hours of playing to transform the Dust Bowl into something resembling a respectable stop on Route 66, but your micromanaging skills need to be top tier. Customers will not just show up to buy gas; they also will go inside and buy snacks, drinks, gifts and newspapers. They'll use the restrooms. And they'll make ridiculous messes along the way, with not just trash but the occasional dead fish falling out of their pockets.

If your store isn't clean, customers will complain. If they aren't checked out at the register quickly, they'll complain. More complaints, fewer customers and less money equals an angry uncle, and we don't want that.

[Video not showing up above? Click here to watch » arkansasonline.com/1018gas/]

And the better you do, the more options unlock, which gives you more to do. Soon you'll be sprinting back and forth refilling cars, repairing vehicles in a garage next door, scanning purchases of plushies, liquor and cowboy hats, cleaning the bathrooms, ordering more inventory, stocking shelves and unloading delivery trucks.

And just when you think you can't do any more, you can hire a few employees, which really helps, especially when a tour bus full of Area 51 enthusiasts arrives and tourists wearing alien masks congo-line their way into the store.

Employees don't work for free, of course, and they need breaks and time off and are yet another thing to manage; but it does help to have some, especially when local hooligan Dennis (he's quite a menace) comes by and starts spray-painting graffiti on your walls or throwing stink bombs at customers. Or when your uncle calls and demands that, just when you thought you had a handle on running an honest, All-American business, you start lock-picking customers' car trunks.

"Gas Station Simulator" is quite good at simulating that feeling of too much to do with too little time to do it, which apparently some people find really enjoyable (I'm looking at you, people with Type A personalities).

Bugs and odd physics events will happen from time to time, but there's also a button to press that resets all vehicles and customers, and if you need a break, the station can be closed to customers.

I'm not sure how well "Gas Station Simulator" will hold interest after the first few hours, but it was a welcome diversion for a while. I'd estimate there are 10 to 13 hours of content, or about twice that amount of time for completionists who want to get all those achievements.

"Gas Station Simulator" is currently only out for PC but will be released for Playstation4 and Xbox One consoles some time in 2022.

Rating: Teen for some violence, imagery and alcohol/tobacco sales