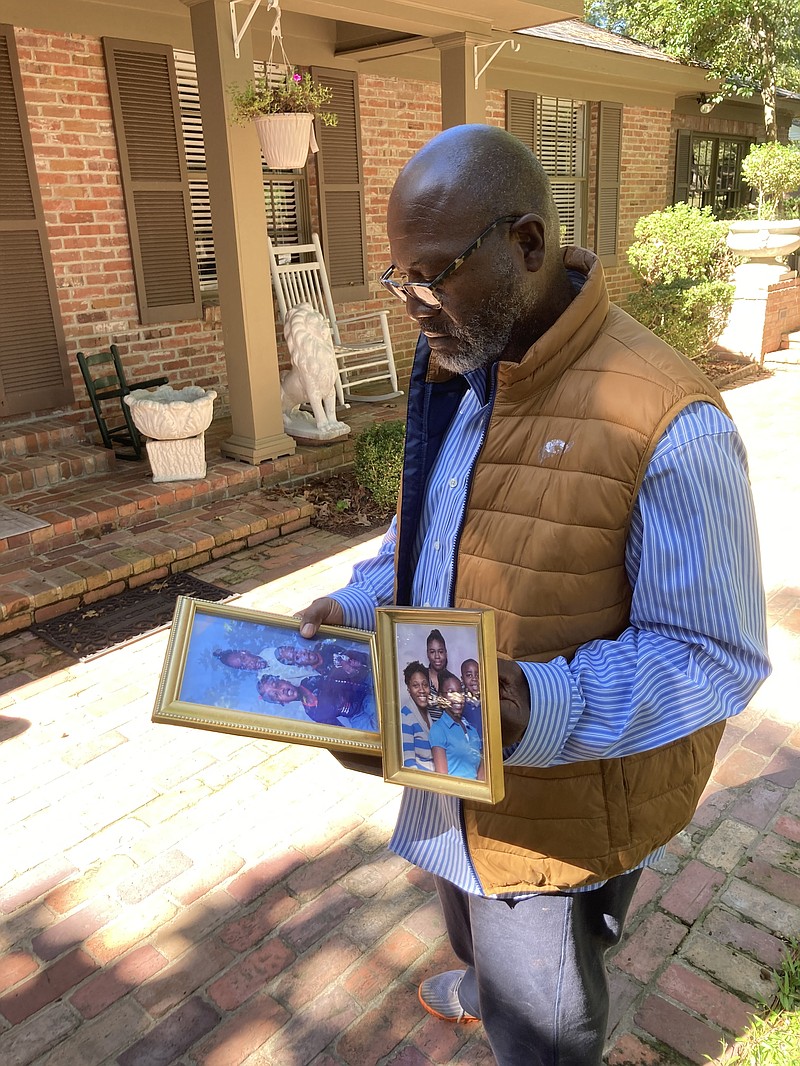 Delton Wright looks at photos of his grandchildren Sunday and talks about one of them, Marquarius Williams, 21, who was shot and killed early Sunday morning. (Pine Bluff Commercial/Byron Tate)

At 12:22 a.m. Sunday, Marquarius Williams was texting his sister, Marsha Williams, trying to find some money so he could get into a party being held at the Sahara Temple.

Marsha Williams was talking to her grandfather, Delton Wright, on Sunday morning while on speakerphone, both struggling to speak and hear the words that made up such a difficult story.

Marsha Williams, 22, said she told her brother, who is a year younger than her, to go to the hospital.

"He started moaning and groaning then," she said. "He didn't know who shot him. He said he was just standing there on his phone."

Wright said his daughter called him between 2 and 3 a.m. to tell him what had happened to her son and to say that Wright needed to come to the hospital because they were "still working on him."

"But he ended up dying," Wright said.

Marquarius Williams was killed on a particularly violent night in Pine Bluff. UAPB homecoming revelry can be raucous, but as morning broke and reports started sifting out that as many as 16 people had been shot during the night, even the Pine Bluff Police Department was taken aback, as evidenced by its slowness to get press releases out on what happened.

It now appears that 12 people were struck by gunfire. Four people were shot at the intersection of Pullen Avenue and University Drive near the Martha Mitchell Expressway, with two of the four listed in serious condition Sunday morning, according to authorities.

The other eight people, including Williams, were hit while inside or outside the Sahara Temple, located at 820 S. Main St. One person was apparently struck by a bullet fired by a Pine Bluff police officer. The person was taken to the hospital where he was treated and released. Authorities have not said why the person was released. The Arkansas State Police is investigating that incident.

Wright, 65, a former justice of the peace and now a part-time antiques dealer, said he loved his grandson, who had three sisters, but that Williams didn't always like what his grandfather told him.

"I'm close to all of them," Wright said of his grandchildren. "But he was hard headed and was running with the wrong crowd, I'm assuming. He liked to wear his pants sagging, and I would stay on him about that."

Wright said Williams had worked at Simmons Bank and for the past two to three months was working at Producers Rice Mill. Wright said the young man also raised dogs.

"He loved those dogs," Wright said, holding framed photos of all four grandchildren that were taken when they were much younger. "He always depended on me. He'd come over and do odd jobs with me, but he used to call me the devil because I'm old school."

A friend of Wright's who had dropped by to say hello and offer her condolences said she had been in downtown Pine Bluff Saturday evening but had left because she had a bad feeling about being there.

The friend, Linda K. Mitchell McNealy, is a 1985 graduate of Watson Chapel High School who now lives in Tennessee and was in town to celebrate homecoming with other classmates. She said she was at a block party on Main Street, located up toward the Jefferson County Courthouse and several blocks away from the Sahara Temple, when she started feeling unsafe.

"The [Jefferson County] sheriff's office had security at the block party, but there were lots of young people just standing around," she said. "There was something that just wasn't right. I just didn't feel safe."

She told her friends who had gathered at the block party that she was leaving for Saracen Casino and would meet them there. That was about 10 p.m.

McNealy said she had been at the casino a few hours and someone called another friend who had followed her to the casino when McNealy left the block party.

"They're shooting downtown," the friend told her, relaying what the caller was saying. "I told them there was a problem down there. It wasn't at the block party, but down the street at the Sahara Temple."

An hour or so later, McNealy said the casino started filling up with young people, and again she started feeling uncomfortable.

"They were just standing around," she said. "Not eating or drinking or gambling. I decided to leave."

McNealy said she is a "God-fearing Christian woman" and that her nervous feelings were God's way of protecting her.

McNealy said the violent turn of events were disturbing to her, adding that she and her high school friends used to be able to roam the city until all hours when they got together but no more.

"There's something about this generation that's just sad," she said. "I love my hometown, but we got out of Pine Bluff just in time."

That point was brought clearly home when one of McNealy's classmates who still lives in Pine Bluff told his friends that he was not going to join them on homecoming weekend.

"He said there are gunshots every night and if not every night, every other night," she said. "And it's not just one or two shots but lots of gunfire. He didn't feel safe getting out."