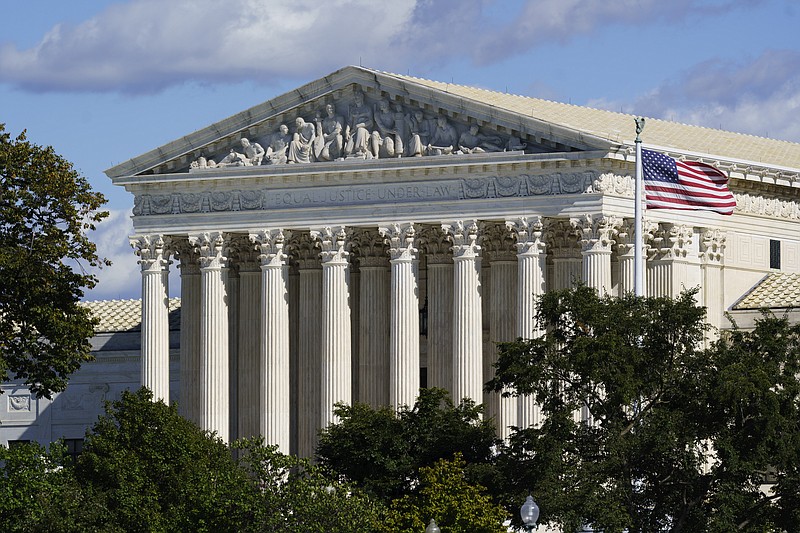 The Supreme Court is seen in Washington, Monday, Oct. 18, 2021. The Biden administration is asking the high court to block the Texas law banning most abortions, while the fight over the measure's constitutionality plays out in the courts. The law has been in effect since September. (AP Photo/J. Scott Applewhite)

WASHINGTON -- The Biden administration asked the Supreme Court on Monday to block the Texas law banning most abortions, while the fight over the measure's constitutionality plays out in the courts.

The administration also took the unusual step of telling the justices that they could grant the Texas law a full review and decide its fate during this term, which already includes a major case about the future of abortion rights in the U.S.

No court has reached a decision on the constitutionality of the Texas law, and the Supreme Court rarely grants such requests.

The law has been in effect since September, aside from a district court-ordered pause that lasted 48 hours. The measure bans abortions once cardiac activity is detected, usually around six weeks and before some women know they are pregnant.

The Justice Department, in its latest filing, asked the high court to lift an order imposed by a federal appeals court that has allowed Texas to continue enforcing the nation's strictest curbs on abortion through a novel law that was written to make it hard to challenge in the federal court system. The department had announced its intentions Friday.

In its plea to the court, the Justice Department wrote that the Texas law defies the Supreme Court's major decisions on abortion rights "by banning abortion long before viability -- indeed, before many women even realize they are pregnant."

"The question now is whether Texas' nullification of this Court's precedents should be allowed to continue while the courts consider the United States' suit. As the district court recognized, it should not," the Justice Department wrote.

[Video not showing up above? Click here to watch » https://www.youtube.com/watch?v=Iw_AslimbFo]

The Texas law "is clearly unconstitutional," and the federal government "has authority to seek equitable relief to protect its sovereign interests -- including its interest in the supremacy of federal law and the availability of the mechanisms for judicial review that Congress and this Court have long deemed essential to protect constitutional rights," wrote acting Solicitor General Brian Fletcher.

"Allowing [the Texas law] to remain in force would irreparably harm those interests and perpetuate the ongoing irreparable injury to the thousands of Texas women who are being denied their constitutional rights," Fletcher added.

The administration said the court could short-circuit the usual process and rule on the law's constitutionality this term, even though lower courts have yet to do so. The justices have done this only a handful of times in recent decades, the last occasion being a 2019 dispute over the Trump administration's ultimately failed effort to include a citizenship question on the 2020 census. In that case, a deadline for finalizing the census was fast approaching.

The high court ordered Texas to respond to the Justice Department filing by midday Thursday.

White House press secretary Jen Psaki said at a news briefing Monday that President Joe Biden would protect abortion rights and that the Justice Department would lead efforts to ensure that women have "access to fundamental rights that they have to protect their own health."

It's not clear whether the administration would prevail at a Supreme Court with a conservative majority that has been fortified by three appointees of former President Donald Trump. The court already has agreed to hear a major challenge to abortion rights on Dec. 1, in a case from Mississippi.

Mississippi's law would ban most abortions after 15 weeks, but it was struck down by lower courts as a violation of Supreme Court precedent regarding pre-viability restrictions. That limit is generally gauged to be 22 to 24 weeks.

The Supreme Court previously has turned away petitions from states that have had their laws prohibiting abortions before viability blocked by lower courts. So the decision to take Mississippi's challenge was viewed by observers as significant. More than 125 friend-of-the-court briefs have been filed on both sides of the issue.

The three Trump appointees, joined by two other conservatives, have once before rejected a plea to keep the Texas law on hold, in a separate lawsuit filed by abortion providers. There was no immediate timetable for Supreme Court action on this latest motion.

While courts have blocked other state laws that would effectively ban abortion before a fetus could survive outside the womb, the Texas law has so far avoided a similar fate because of its unique structure that leaves enforcement up to private citizens, rather than state officials. Anyone who brings a successful lawsuit against an abortion provider for violating the law is entitled to claim at least $10,000 in damages.

In a 5-4 vote last month to allow the law to remain in effect, the high court acknowledged in an unsigned order that there were "serious questions regarding the constitutionality of the Texas law" but also "complex and novel" procedural questions about whom to sue and whether federal courts had the power to stop the law from being enforced.

In a dissenting opinion, Chief Justice John Roberts wrote that he would have put the "unprecedented" law on hold so the court could consider "whether a state can avoid responsibility for its laws" by handing off enforcement. The court's three liberal justices also dissented.

The question now is whether the administration's presence in the new lawsuit will make a difference. A three-judge panel of the 5th U.S. Circuit Court of Appeals provided its answer late Thursday, extending its earlier order that allows the law to remain in effect. In a 2-1 vote, the court said it was siding with Texas for the same reasons the Supreme Court and a different 5th Circuit panel cited in the providers' lawsuit -- questioning whether anyone could march into federal court to challenge the law.

Texas sought review from the appeals court after U.S. District Judge Robert Pitman ruled that the Justice Department did have the ability to sue and that he had the authority to stop the law from being enforced, writing that "women have been unlawfully prevented from exercising control over their lives in ways that are protected by the Constitution."

The judge conceded, however, that "other courts may find a way to avoid this conclusion."

Information for this article was contributed by Mark Sherman of The Associated Press and by Robert Barnes and Ann Marimow of The Washington Post. 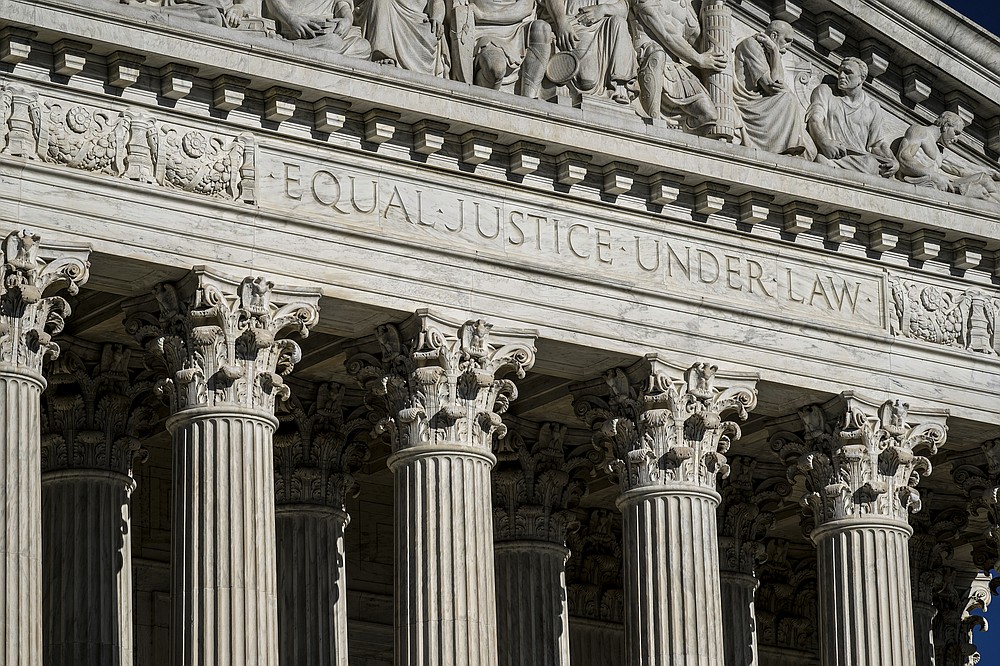 FILE - This Sept. 3, 2021, file photo shows the Supreme Court in Washington. The Biden administration is asking the Supreme Court to block the Texas law banning most abortions, while the fight over the measure&#x2019;s validity plays out in the courts. The law has been in effect since September, aside from a district court-ordered pause that lasted just 48 hours. (AP Photo/J. Scott Applewhite, File)