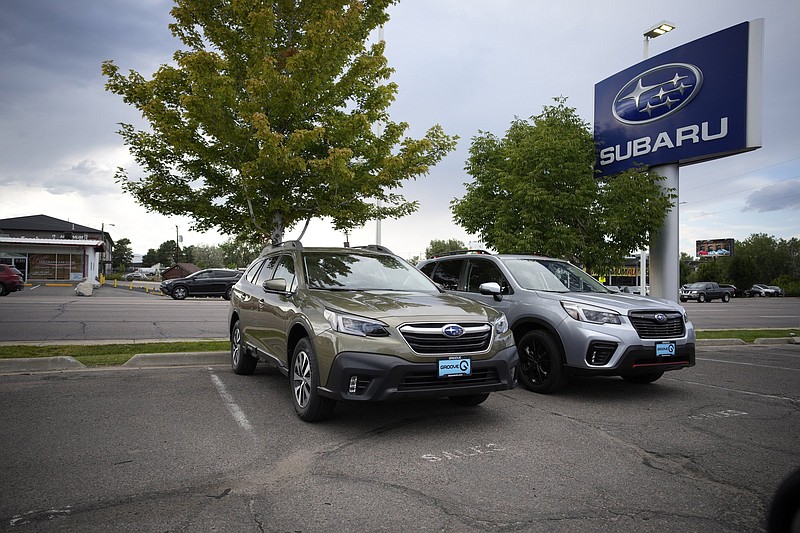 A pair of unsold 2021 sports-utility vehicles sit in an otherwise empty storage lot last month at a Subaru dealership in Littleton, Colo. U.S. industrial production fell by the most since February, the Federal Reserve reported Monday. (AP/David Zalubowski)

The Federal Reserve reported Monday that nearly half, or 0.6%, of the overall decline in total industrial production was attributable to the hurricane. The median estimate in a Bloomberg survey of economists called for a 0.1% monthly increase.

It was the worst showing since February's 3.1% decline, when severe winter storms hammered much of the country, disrupting a wide swath of manufacturing activities from autos to chemical plants.

Resilient demand among firms and consumers has kept production elevated, but it has also contributed to order backlogs as manufacturers struggle to source materials and skilled labor. The weaker-than-expected September print indicates that producers continue to be held back by snarled supply chains.

Industrial production covers manufacturing, utilities and mining. The government said manufacturing output fell 0.7%, dragged down by a 7.2% decline in motor vehicles and parts as shortages of semiconductors continued to thwart the industry.

In a note to clients, economist Daniel Silver of J.P. Morgan said the September data disappointed, "particularly in the manufacturing sector where it looks clear that supply chain issues are continuing to weigh on activity."

Capacity utilization for the entire industrial sector fell 1% in September to 75.2%, about 4.4% below its average.

Even with the bigger-than-expected decline and August's downward revision, total industrial production rose at an annual rate of 4.3% in the third quarter. It's the fifth consecutive quarter with a gain of 4% or more.

Manufacturing job openings are near a record high, and for the products that factories can source, prices have soared. Recent data from the Labor Department showed a price gauge of processed goods for intermediate demand, which include materials and components used in manufacturing and construction, are up almost 24% from 12 months ago.

Information for this article was contributed by Matt Ott of The Associated Press and by Olivia Rockeman of Bloomberg News (TNS).