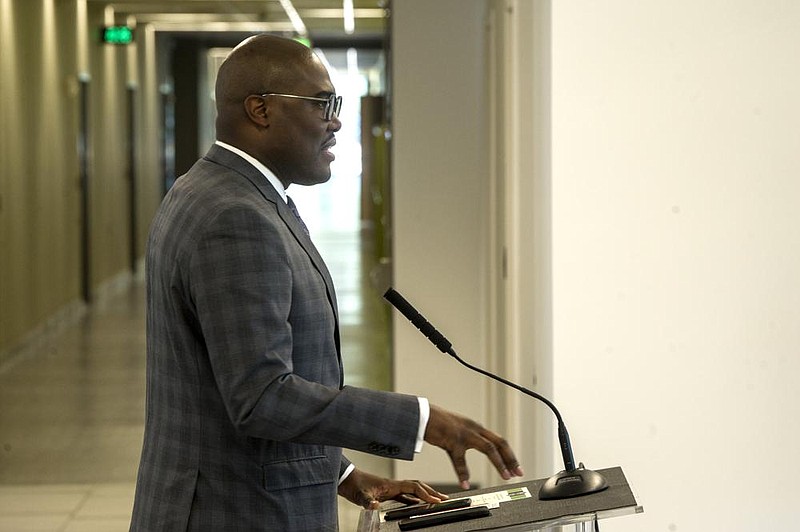 Little Rock Mayor Frank Scott Jr. privately provided two draft redistricting maps to members of the city's Board of Directors on Monday as officials prepare to redraw ward boundaries based on results from the 2020 census.

In an email to board members, Scott called attention to the recent decision by state lawmakers to divide Pulaski County among three congressional districts -- a move the mayor has criticized, calling it gerrymandering along racial lines.

"As the redistricting process has unfolded at the State legislature and potentially our judicial system, I think it is imperative that we pay close attention and learn from some of the challenges they are facing," Scott wrote in the email, which was obtained by the Arkansas Democrat-Gazette. "It is evident that the decision to split Little Rock and Pulaski County into multiple Congressional districts is both irrational and intended to suppress the voices of many of our residents."

He added, "If we follow the stated principles to guide our redistricting process, then we can have a fair, equitable, transparent, and participatory process that we can all be proud of."

Scott went on to list four principles that he previously told board members ought to guide the redistricting effort. They include elimination of east-west Interstate 630 as a dividing line and the avoidance of overwhelmingly single-race wards.

The structure of the city board provides for seven ward-specific representatives elected from districts along with three at-large members elected citywide.

Based on the results of the 2020 census, which found Little Rock had an all-time high population of more than 202,000, city officials seek a target population of 28,950 residents in each ward, according to Scott's email.

Scott provided board members with two maps and corresponding spreadsheets showing population figures for the wards contained in each map, as well as the breakdown of ward residents by race and ethnicity.

He said the city's planning staff produced the draft maps.

One, which Scott dubbed "Redrawn Wards," used the city's existing method, "which keeps every director in their current Ward and has the least amount of change to the current make up of each Ward," he wrote.

Another map, dubbed "New Wards," made use of Scott's recommended principles to draw new boundaries, he said.

"Wards are compact and contiguous, all neighborhoods and communities of interest are kept intact, I-630 is eliminated as a boundary and no longer divides our Wards, each ward closely resembles the makeup of the city, and each ward is closer to our target number of 28,950," he wrote.

The mayor later emphasized the maps are not final and invited city directors to share their thoughts.

"This is simply a path to start our conversation about redistricting and look at how we have completed the process in the past compared to how we can improve the process," he wrote.

Ward 1, which encompasses the city's downtown core and eastern edge along the Arkansas River, would push slightly west to envelop a thin L-shaped area that reaches up to touch I-630 and is presently part of south-central Little Rock's Ward 2.

Additionally, under the "Redrawn Wards" map, southwest Little Rock's Ward 7 would grab some of the area that currently constitutes a western edge of the city in Ward 6.

The boundaries of the city's three northwestern wards -- 3, 4 and 5 -- would remain essentially the same under the "Redrawn Wards" map.

Whereas the current map features wards that largely fall into either the city's northern or southern half with I-630 as a rough divider, the "New Wards" map would have "West Central" and "Midtown" wards that push north and south past the freeway, ignoring I-630 as a dividing line.

A "North Central" ward would encompass the areas surrounding Cammack Village and a long stretch of Cantrell Road that currently fall into two wards, 3 and 4, and would effectively merge the northern halves of the two wards.

A "Downtown/East" ward would continue to cover much of what is currently part of Ward 1 but also would expand the ward north and west beyond the vicinity of the freeway into communities that are presently part of Ward 3.

Earlier this month, Scott told board members that his intention was to have a redistricting plan presented to the board and members of the public by Dec. 7, with a vote on final maps to follow Dec. 14.