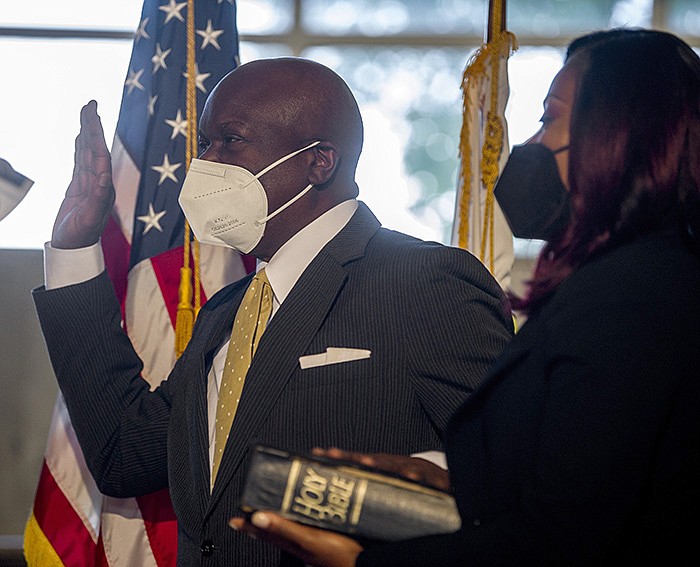 Virgil Miller takes his oath of office as his wife, Stephanie, holds his mother's bible during a ceremony at City Hall on Monday, Oct. 18, 2021. Miller was appointed to the Ward 1 Little Rock Board of Directors for the remainder of the current term of the late Erma Hendrix. (Arkansas Democrat-Gazette/Stephen Swofford)

Virgil L. Miller Jr. was sworn in Monday as the newest member of the Little Rock Board of Directors in a ceremony at City Hall.

Miller, 68, placed his hand on a Bible held by his wife, Stephanie, as Little Rock District Judge Mark Leverett delivered the oath of office.

Miller, along with 19 other people, had applied to fill the vacancy.

Board members eventually winnowed the field to eight finalists. In an interview last week, Miller said he plans to run for a full four-year term in November 2022.

In remarks following the oath, Miller called attention to the "big, heavy, worn-out Bible" he held.

Miller said the book "links me today with my mother, who 30 years ago today transitioned from this life. And it is a very mixed emotion for me, but I know she's here with me in spirit."

His appointment comes amid fissures between the administration of Mayor Frank Scott Jr. and other city officials.

Before they voted to appoint Miller at last week's special meeting, members of the city board discussed the troubled settlement negotiations between Little Rock and the estate of Bradley Blackshire, a 30-year-old Black man who was shot and killed in 2019 by then-police officer Charles Starks.

Little Rock's city attorney has said the proposed agreement should get the review of the city board, contradicting lawyers from two outside firms and the Arkansas Municipal League who have represented the city in the litigation since the summer of 2020.

Additionally, Miller's appointment comes on the heels of the defeat of Scott's proposed sales-tax increase, dubbed "Rebuild the Rock," which failed in a Sept. 14 city referendum, 62-38%.

In the interview with the Arkansas Democrat-Gazette last week, Miller suggested he will work with other city officials to evaluate the effects of the expiration of a three-eighths percent (0.375%) sales tax that for the past decade has been used to fund capital improvements.

The tax will sunset at the end of the year.