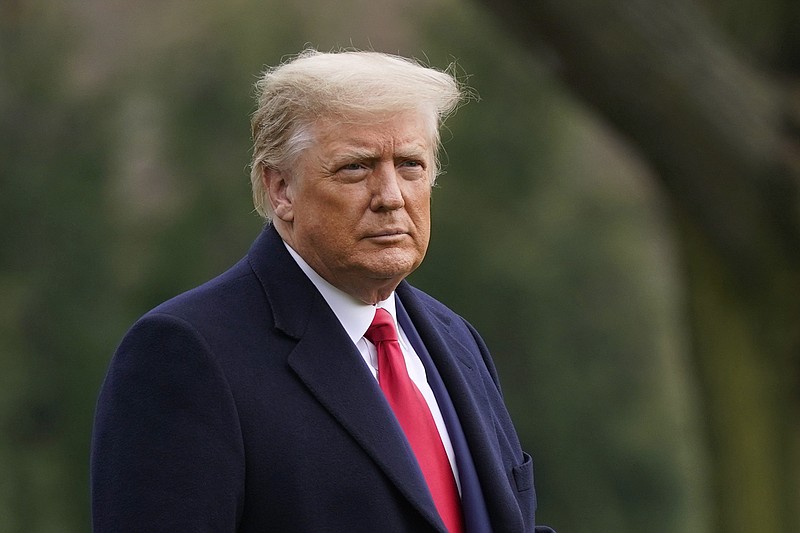 FILE - In this Dec. 12, 2020, file photo President Donald Trump walks on the South Lawn of the White House in Washington before boarding Marine One. (AP Photo/Patrick Semansky, File)

Five Arkansas lawmakers have signed on to a letter calling for a 50-state audit of the 2020 presidential election and making unsubstantiated claims about corruption.

The letter, addressed to "the citizens of the United States of America," was initially posted on social media by Wendy Rogers, a Republican state senator from Arizona, who said it was written by 41 legislators from multiple states, in late September.

Since then, nearly 150 lawmakers from 38 states have signed on, according to Rogers' website, including Arkansas GOP members Sen. Trent Garner of El Dorado, Rep. Mary Bentley of Perryville, Rep. Mark Lowery of Maumelle, Rep. Marcus Richmond of Harvey and Rep. Brandt Smith of Jonesboro. National outlet Talking Points Memo reported on the letter, which the Arkansas Times blog noted Monday.

"We have come to the conclusion that all 50 states need to be forensically audited. Voter rolls should be scrubbed with a canvass of the voters to ensure future integrity of our elections," the letter reads, going on to call on each state to decertify its electors "where it has been shown the elections were certified prematurely and inaccurately."

Former President Donald Trump has repeated unproven allegations about widespread voter fraud in the 2020 election, claiming that he lost in Arizona and other battleground states as a result.

The letter says Arizona's review was "complemented by an in-depth canvass of votes in Arizona, as well as through multiple different data reviews of voting by independent experts."

A hand recount of 2.1 million ballots in Arizona widened Biden's margin of victory in Arizona's most populous county. A contractor's report found that there might be problems with voter rolls in Maricopa County but did not find that widespread voter fraud affected the election results.

The letter states that if the reviews show that Biden would receive fewer than 270 electoral votes or that Trump would receive more than 270, call should be made for the U.S. House of Representatives to convene and vote by means of one vote per state to "decide the rightful winner of the election."

"This is our historic obligation to restore election integrity of the vote as the bedrock of our constitutional republic. If we do not have accurate and fair elections, we do not have a country," the letter concludes.

Arkansas lawmakers who signed the letter said they did so because they wanted to see any election fraud dealt with.

"If you have any kind of election fraud, whether it's one vote or 2,000, it needs to be held accountable," Garner said.

Bentley said residents of her district had asked her to sign the letter.

"There's nothing more sacred to my constituents than making sure that our elections are fair and honest," she said.

Richmond and Smith did not return requests for comment by deadline Tuesday. Smith is running to represent Arkansas' 1st Congressional District in the U.S. House of Representatives, challenging U.S. Rep. Rick Crawford, R-Ark.

Lowery, who is running for secretary of state, said he supports election integrity and "however we can go about finding where there might be gaps in that integrity."

He said Arkansas, where more than 62% of voters favored Trump, would be a good place for a "full forensic audit" because the fact that Trump won the state would alleviate concerns that the investigation was politically motivated. But if an investigation found that the former president's margin of victory in the state was larger than it was in the results that were certified, then officials could identify "problem areas" and devote resources to securing elections in those parts of the state.

Lowery cited instances of voting and election issues in the state, including a box of disqualified ballots being mixed in with other ballots during the tabulation process in the November 2020 election. The mix-up led to a dispute over the winner of the race for state House District 32 covering west Little Rock, though multiple courts and the Arkansas Claims Commission rejected the ousted Republican incumbent's claims that the error made the winner impossible to determine.

Current Arkansas Secretary of State John Thurston said in a statement Tuesday that he shared "the concerns about what took place in the 2020 election on a national level," but Arkansas had a "clean and accurate election."

"Due to our processes, in Arkansas, and the hard work of our County Clerks, County Election Commissioners and poll workers, to the best of our knowledge the election results in Arkansas were accurate," Thurston said, adding that the one exception was the Pulaski County incident, which can be attributed to human error.

Thurston said that while his office will work with any legislators with concerns or questions about the process, Rogers' letter did not detail how the audits would be conducted and who would conduct them.

"I am open, as always, to any Legislative input on how we can improve the public's confidence in the voting process. My one concern is the infringement on State's rights and possible federalization of our elections," he said.

Williams said he had not seen the letter, but believed each state has to be responsible for its own elections, and that there is "enough to do here in Arkansas to make sure that we have laws to make sure our voting is secure."

"I've been focused on running for secretary of state to make sure Arkansas gets it right 100% of the time. That's my mission," he said.

He added that calling for a 50-state audit is "a simple thing to say but complex thing to get done."

Josh Price, a former Pulaski County election commissioner from Maumelle who is seeking the Democratic nomination for secretary of state, called the letter's statement about election corruption "a bit of a ridiculous claim" and that such efforts are a way to disenfranchise voters.

"Donald Trump's own Attorney General said there was no widespread voter fraud in the 2020 election, yet delusional Republicans continue to spread lies about the last election so they can undermine the foundations of our democracy. The Republican Party pushes these lies of election fraud so they can make it tougher to vote, lower voter participation, and hold onto power for their own benefit," Price said in a statement.