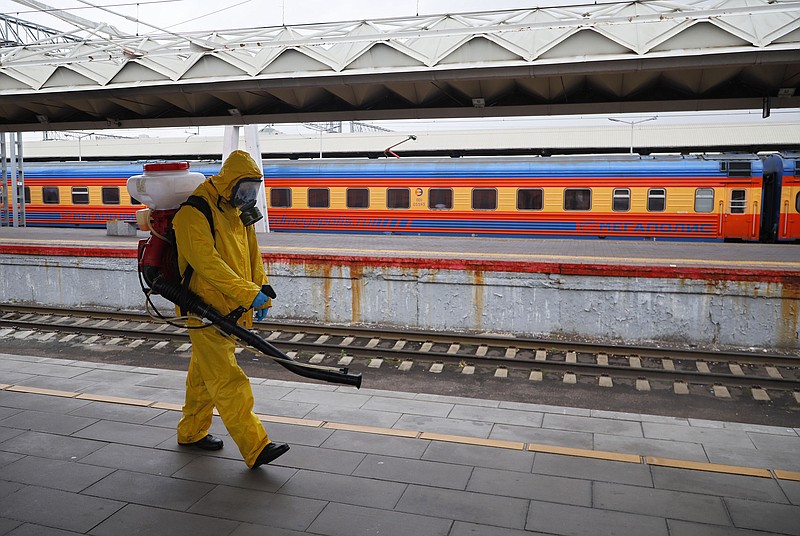 An employee of the Federal State Center for Special Risk Rescue Operations of Russia Emergency Situations disinfects Leningradsky railway station in Moscow, Russia, Tuesday, Oct. 19, 2021. Russia registered another daily record of coronavirus deaths Tuesday as rapidly surging contagion raised pressure on the country's health care system. The daily coronavirus mortality numbers have been surging for weeks and topped 1,000 for the first time over the weekend amid sluggish vaccination rates and the government's reluctance to toughen restrictions. (AP Photo/Alexander Zemlianichenko Jr)

Moscow told its unvaccinated seniors to stay home while Russia moved to impose other new restrictions nationwide against the spread of covid-19 as the country battles record levels of infections and deaths.

Unvaccinated people over 60 in the Russian capital will have to remain at home for four months starting Monday, Mayor Sergei Sobyanin said in a blog post Tuesday. Meanwhile, Prime Minister Mikhail Mishustin told officials that President Vladimir Putin will be asked to declare Oct. 30 to Nov. 7 as non-working days nationwide. Regions with the most serious levels of cases should introduce the restriction from Saturday, Deputy Prime Minister Tatyana Golikova said.

"The burden on the health care system continues to increase and, in this situation, we need to get ahead of the curve," Mishustin said, telling Golikova to present the proposals at a government meeting with Putin today. "The experience of previous restrictions has shown the effectiveness of these measures."

The government is turning to Putin after a week in which daily new infections have passed 30,000 for the first time since the crisis began last year, with deaths reaching a record high of 1,015 on Tuesday.

The Kremlin has resisted all calls to reintroduce a nationwide lockdown, placing responsibility on regional officials to announce social restrictions to try to curb the spread of the virus. Putin has sought to distance himself publicly from unpopular restrictions but has always supported the government's proposals.

Only a third of people in the 60+ age group have been vaccinated, despite the group accounting for 86% of covid-19 deaths, Sobyanin said in justifying the lockdown. He also announced several new restrictions to fight the spread of the pandemic.

Moscow will increase the percentage of workers facing mandatory vaccination and reintroduce a work-from-home requirement for at least 30% of employees until Feb. 25, he said.

Although Putin last year touted Russia as the first country to approve a covid-19 vaccine, the inoculation program has been met with widespread skepticism. Just over 45% of the population has either been vaccinated or recovered from infection by covid-19, far below the level needed for collective immunity, Golikova said.

Only 28 regions have introduced QR codes to restrict access to shopping centers, restaurants, fitness centers and other public spaces to those who've vaccinated or recovered from the illness, which is "insufficient," Anna Popova, head of Russia's public health watchdog, said at the meeting.

The worsening situation "requires a much larger volume of measures to be taken and a much faster response," Popova said.