Democrats hunker down to finish up budget plan 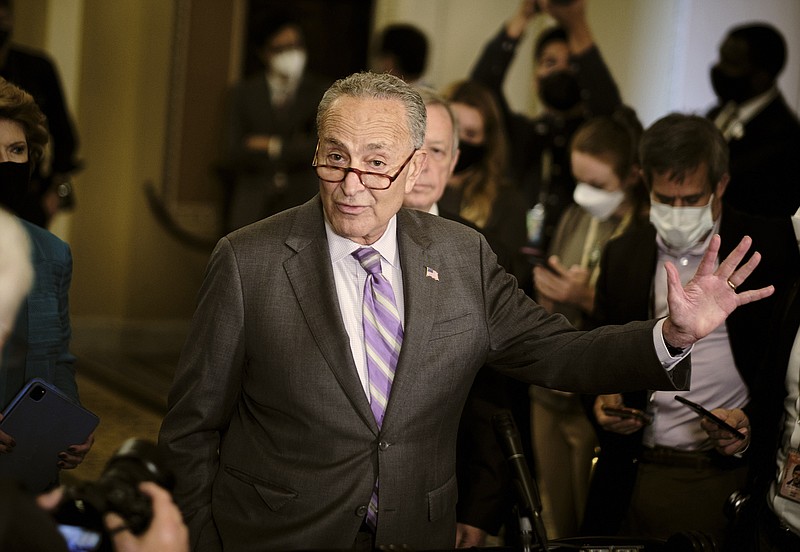 Sen. Joe Manchin on Wednesday implored Senate Majority Leader Charles Schumer (shown) and Senate Minority Leader Mitch McConnell to work together to end the debt ceiling impasse. Manchin remains resolute in his opposition to changing the Senate filibuster rule, though Schumer warned the day before that “downgrade is hovering over us” as credit agencies watch the tumult. (The New York Times/T.J. Kirkpatrick)

Nearly 20 centrist and progressive lawmakers met in separate groups with Biden as Democrats reviewed a menu of alternative strategies to reach accord on his overall package.

Likely to be eliminated or seriously shaved back: plans for tuition-free community colleges, a path to legal status for migrants who are in the U.S. without documentation, and a specific clean energy plan that was the centerpiece of Biden's strategy for fighting climate change.

The details were shared by those familiar with the conversations and granted anonymity to discuss the private meetings.

Biden felt "more confident" after the day of meetings, said press secretary Jen Psaki. "There was broad agreement that there is urgency in moving forward over the next several days and that the window for finalizing a package is closing," she said.

[Video not showing up above? Click here to watch » https://www.youtube.com/watch?v=feYA8GJXtLo]

Biden's ideas are all to be funded by tax hikes on corporations and the wealthiest individuals, those earning more than $400,000 a year.

The president especially wants to advance his signature domestic package to bolster federal social services and address climate change by the time he departs for a global climate summit next week.

Rep. Ro Khanna, D-Calif., a progressive caucus member, said Biden urged the lawmakers to "get something done now" to show U.S. leadership on climate change on the global stage.

"He really believes American leadership, American prestige is on the line," Khanna said.

The Democrats need to find tactics that can be accepted by both centrists and progressives, whose votes are all needed in the evenly divided Senate. Senators want to reach a framework this week ahead of month-end deadlines.

A key holdout on Biden's proposals, conservative Sen. Joe Manchin from coal-state West Virginia, has made it clear he opposes the president's initial Clean Energy Performance Plan, which would have the government impose penalties on electric utilities that fail to meet clean energy benchmarks and provide financial rewards to those that do -- in line with Biden's goal of achieving 80% "clean electricity" by 2030.

Instead, Biden focused in his Tuesday meetings on providing at least $500 billion in tax credits, grants and loans to fight climate change, much of it likely coming from a package compiled by Sen. Ron Wyden, D-Ore., the chairman of the the Finance Committee. Those include the tax breaks for energy producers that reach emission-reduction goals.

That clean energy approach could better align with Manchin's stated goal of keeping a "fuel neutral" approach to federal policy that does not favor renewable energy sources over coal and natural gas that are dominant in his state.

Other climate-change-fighting proposals being considered are a tax on carbon dioxide emissions from fossil fuels such as oil and coal or a methane emissions fee -- though Manchin told reporters earlier in the day that a carbon tax was not in the mix.

"There was universal -- universal -- agreement in that room that we have to come to an agreement and we got to get it done," Senate Majority Leader Charles Schumer said after a lunch at the Capitol that senators described as "lively" and "spirited."

Advocates warn that inaction on climate change could cost the U.S. billions of dollars in weather-related disasters and threaten to uproot millions of Americans in hurricanes, wildfires, droughts and floods.

Without Manchin's support, however, Biden's initial climate proposal is almost certain to be eliminated from the package, lawmakers and aides say. It would offer grants to power companies that increase clean energy generation by 4% each year and fine those that do not.

"I've been told it would be prudent to plan alternatives," said Sen. Sheldon Whitehouse, D-R.I.

Rep. Mark Pocan, D-Wis., another progressive caucus member, called the opposition from Manchin on climate issues "one of the biggest challenges" threatening to stop a final bill.

Biden met for nearly two hours Tuesday with the first group of lawmakers, progressives who emerged confident a deal was within reach. Moderate lawmakers met next.

Rep. Pramila Jayapal, D-Wash., chairwoman of the Congressional Progressive Caucus, said the first group and Biden did not discuss a carbon tax. She said the climate pieces of the overall bill are among the "most challenging," but she also said the group feels "even more optimistic" about striking agreement on Biden's priority package.

Another part of the negotiations includes a paid family and medical leave proposal. Faced with the possibility it could be cut from spending legislation, allies of the White House are trying to salvage it by offering a compromise that would initially give workers four or six weeks off.

The plan that is under discussion would scale up over 10 years to the 12 weeks that Biden originally proposed and advocates of the policy continue to support.

Workers would have as much as 85% of their wages replaced -- just as they do in Biden's proposal -- if they take time off to care for a newborn, ailing family member, sick child or their own severe or long-term illnesses.

"We understand we're in difficult negotiations right now. But what gets decided has to be substantial enough to make sure that low income workers will use it. That parents who are struggling to make ends meet can use it," Carol Joyner, the labor project director for Family Values Work, said.

White House officials have assured paid leave advocates that their program is not on the chopping block.

On other fronts, Biden and the Democrats appeared to be coalescing around a slimmed-down package.

Biden wants to extend the $300 monthly child tax credit that was put in place during the covid-19 crisis for another year, rather than allow it to expire in December.

The policy has been praised for sending cash to families most in need. Democrats want to extend the credit for additional years, but limiting the duration would help shave the costs. It's now to be phased out for single-parent households earning more than $75,000 a year, or $150,000 for couples, but those income thresholds could be lowered to meet demands of Manchin and more conservative Democrats.

And a new program to provide dental, vision and hearing aid benefits to seniors on Medicare proposed by Sen. Bernie Sanders, the independent from Vermont, is likely to remain in some fashion, said Khanna, a longtime Sanders ally.

Expected to still be included in the package are new subsidies to help families afford child care as well as increased subsidies put in place during the pandemic for people who buy their own health insurance.

Biden told lawmakers that after his top priorities there would be $300 billion remaining, which some suggested could be used for housing aid and racial justice issues. Biden also mentioned money could go for retrofitting homes of low-income people.

The president is set to hit the road today, visiting Scranton, Pa., his birthplace, to pitch voters again on his vision. Previewing the trip, Psaki said Biden intends to "talk about growing up in Scranton and the way his experience there influenced his values and his belief that we need an economy that works for working people."

Biden has put his full political weight behind two separate but related packages. The first is a bipartisan, roughly $1.2 trillion plan to improve the nation's roads, bridges, pipes, ports and Internet connections, which cleared the Senate earlier this year. The second is the broader, $3.5 trillion tax-and-spending package that Democrats hope to adopt using a legislative tactic that allows them to sidestep a Republican filibuster.

Politically, it appears neither legislative effort can advance without the other. Liberals have held up the infrastructure bill to maximize negotiations over additional spending, but they cannot advance that second package without centrists' support. With only slim voting majorities, Democrats have no room for error in the face of sustained Republican opposition, which GOP lawmakers reiterated Tuesday.

"Every day, American families are feeling real pain because of the reckless and inflationary policies that Democrats have already rammed through," Senate Minority Leader Mitch McConnell, R-Ky., said during a speech on the chamber floor.

Congress has set an Oct. 31 deadline for passage of Biden's big package.

Print Headline: Democrats hunker down to finish up budget plan