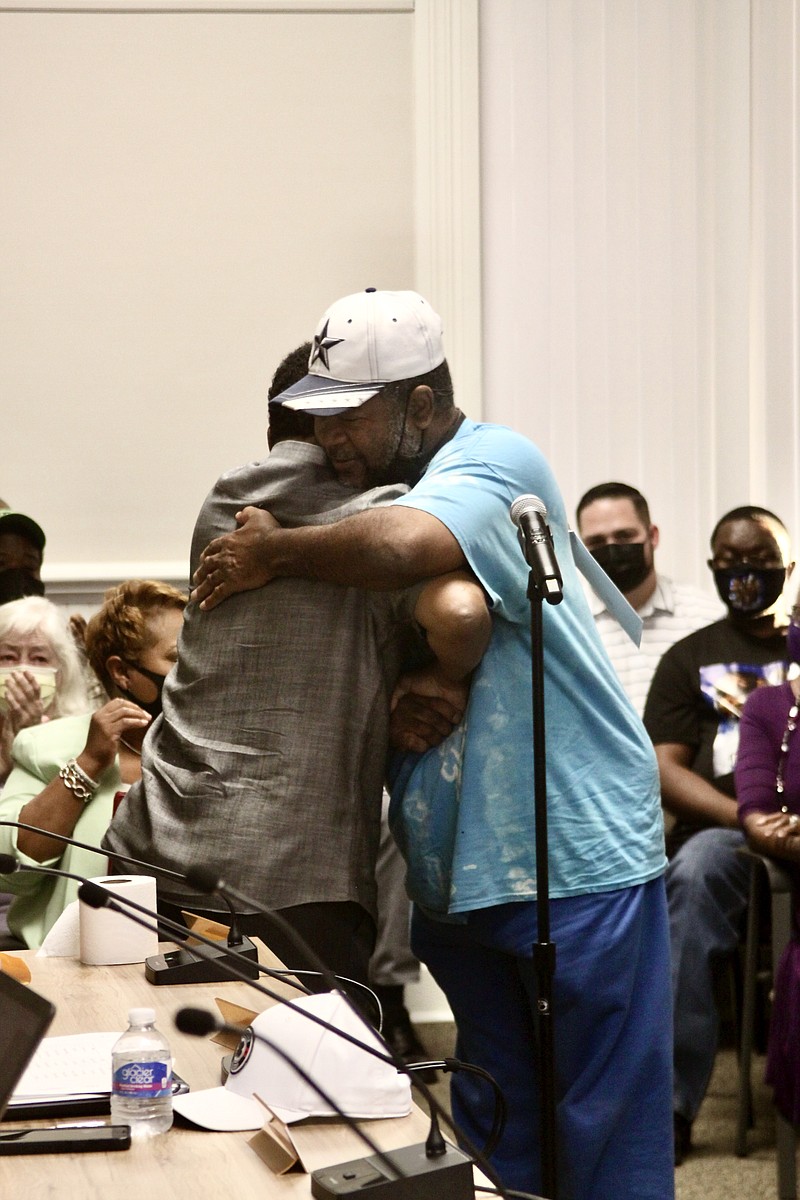 "Me and my wife went in the hospital together with covid-19. I was the only one that came out."

Those were the words of the Rev. Ricky Mays as he spoke about his wife, Sharon, who died Sept. 20 at Baptist Health Medical Center in Little Rock.

Married for almost 42 years, Mays said he still thinks his wife is at home waiting on him.

Widowers and widows shared stories about their soulmates as they received covid-19 survivor's benefits Monday during the Jefferson County Quorum Court meeting.

This was the second installment of the "act of kindness" sought by Jefferson County Judge Gerald Robinson through the American Rescue Plan.

Overcome with emotion, widower and veteran Henry Ford said that since his wife, Janice Ford's death, he has been lost. Janice Ford died July 5, 2021, at age 64.

"I've been through a lot of trauma in my life, but it isn't equal to losing your wife," said Ford, who added that they were married for 49 years.

Henry Ford said he has been emotional, alone and grief-stricken, and described covid-19 an as "unseen enemy that lurks and preys."

"It has no boundaries -- a killer that we can't see," he said. "It creeps up on us unaware and robs you of your most precious gift -- your children, your next of kin, your next-door neighbor, or in my case here, my beloved spouse."

Keith Martin had just recently celebrated his anniversary with his wife, Tina Martin, in July. Martin said 2020 started off good for them.

"He had a seizure and passed away at their mom's house," said Martin. "We buried him Sept. 4th."

Martin said that on Sept. 15 his wife found out she had contracted covid-19 at her job. Martin ended up contracting covid-19 also, but said that while he survived, the virus killed his wife Sept. 30.

"Sept. 27th, she passed out at the house. Her last words were, 'Are you OK?'" said Martin. "We took her to Baptist and unfortunately they couldn't do anything because she had fluid on her brain and she had multiple strokes."

Martin shares two sons with his wife and said this year has been very hard for them. A graveside service for her was held Thursday.

"She wasn't able to see her oldest graduate from Pine Bluff High School," said Martin, who added that his wife was a proud PBHS alumni. "Now her baby is a senior."

Another young couple who was just beginning to live their life now that their children were older was Kevin Burris Sr. and his late wife, Marie Burris.

Burris said they have five children, and it's been tough since Marie Burris died July 22 at Jefferson Regional Medical Center.

Burris said that with the help of the older children he is making it.

Matthew Stangel thanked his family and church family, Crossroads Christian Fellowship Church, for being there for him.

The two were active members of the church, which named the food pantry in Debra Stangel's honor.

"I couldn't do this without my family and church," said Stangel. "It's been really hard."

Fred Robinson, who was not in attendance, was named a recipient of the survivor benefit funds as well. Robinson was the husband of Carolyn Robinson, who died at age of 84 on Jan. 14.

Carolyn Robinson was elected to the Pine Bluff City Council in 1978, the first woman to hold the position.

Goodlow, who could barely speak through her tears, thanked the Quorum Court for what it was doing.

Cantwell, who also could barely speak, began to cry as her daughter Cassie came up to speak about her father Charles, who died in the hospital Jan. 2.

"He got sick at the end of December and went to the hospital soon after," said Cassie, who said her mom was also sick with covid-19 at the time. "On Jan. 2nd we got the call that he wasn't going to make it, and I couldn't even hug my mom when they told us he died because she was quarantined and on oxygen herself."

Cassie said making funeral arrangements for her father was the hardest thing she ever had to do, and that her mom and dad were married for 32 years.

"God bless us all," Ford said to the survivors.

"No matter what you're going through, somebody is in worse shape than you are," said Mays. "Every morning that you get up, you ought to tell the Lord, "Thank you," because he didn't have to wake you up, but he gave you another chance."

A total of $46,045 was awarded Monday, adding to the $148,816 that was awarded in September. The money is based on a formula that includes family hardship and funeral costs.

A balance of $105,148 remains, which officials say will also be distributed to covid survivors. 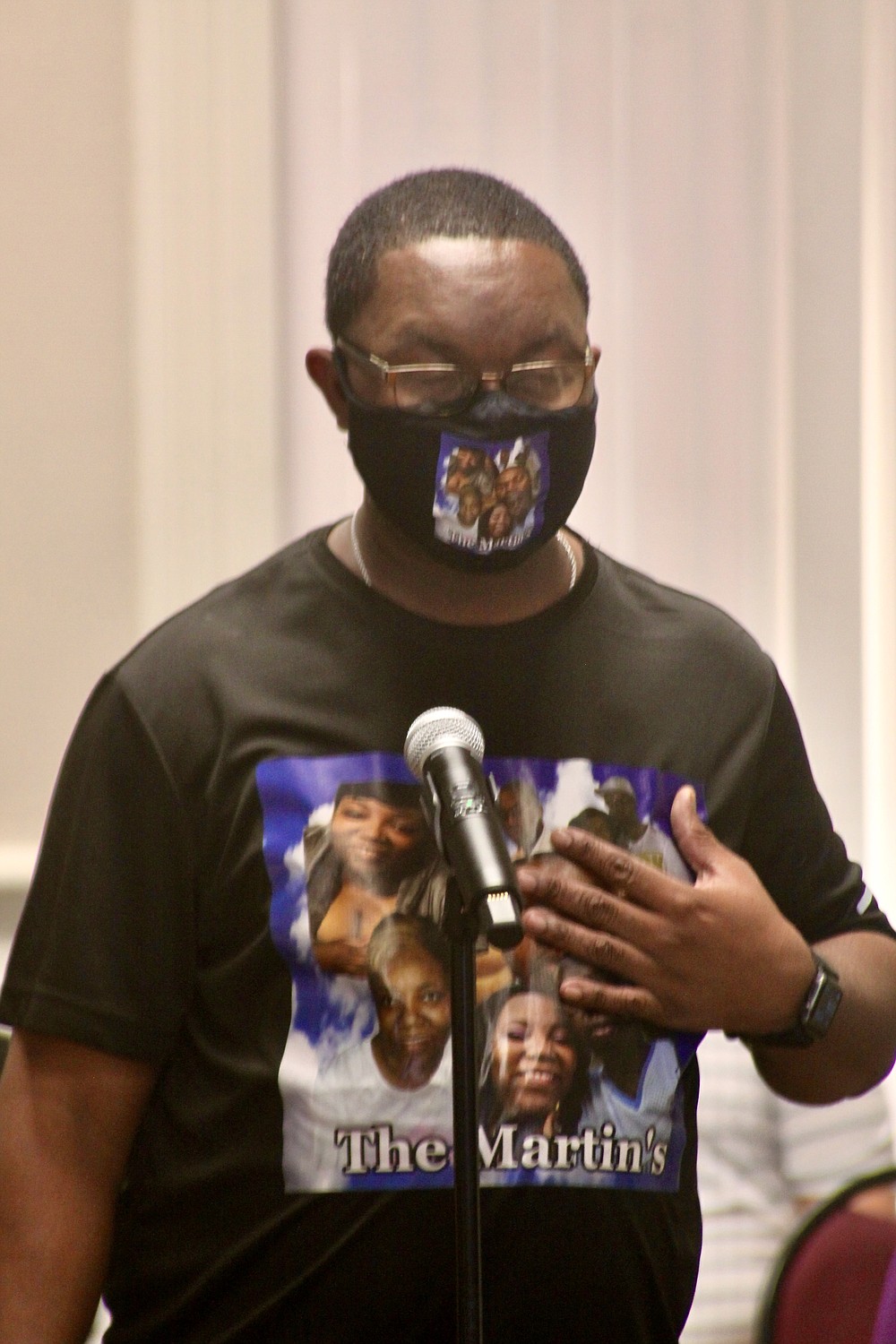 Keith Martin wears a picture of his late wife Tina Martin on his shirt and said her death has been hard on him and their children. (Pine Bluff Commercial/Eplunus Colvin) 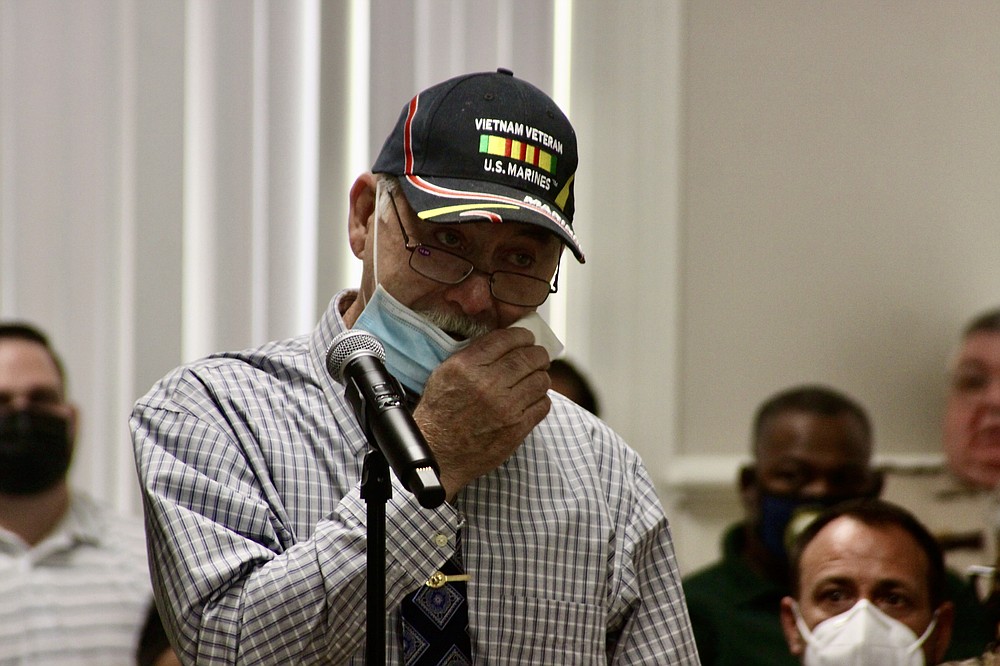 Widower and Veteran Henry Ford weeps for his wife, Janice Ford, and said he is lost without her. (Pine Bluff Commercial/Eplunus Colvin) 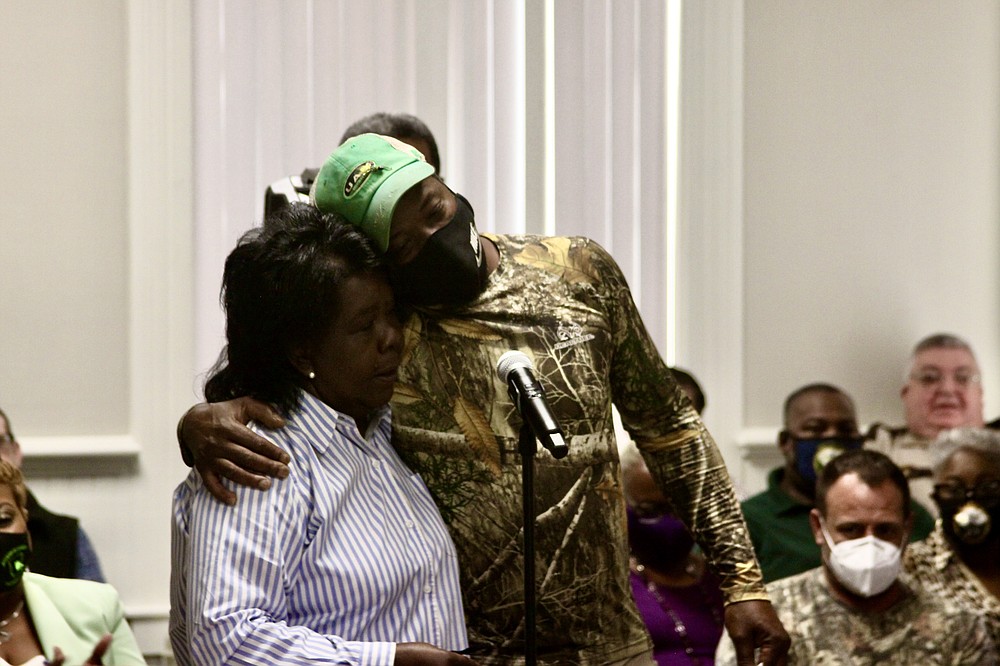