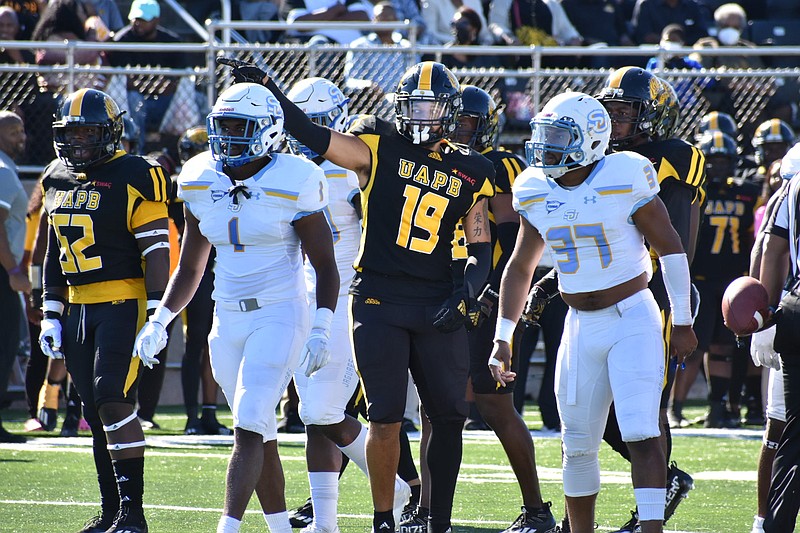 Riding a five-game skid, University of Arkansas at Pine Bluff Coach Doc Gamble was met with a direct observation followed by a question over Zoom:

"It doesn't seem like your team played with the same type of desire since the Alcorn game. What is it going to take to get them back to that level of competition?"

Gamble didn't hesitate to address it.

"This is the honest truth: We're not able to overcome our injuries," the Golden Lions' second-year coach said Monday. "We're going into the game without three of our better linemen. One of our corners was out. Our safety was hurt. We're playing with new guys, and we've got to get those guys up to speed."

The Lions' mounting injuries could be blamed for woes that have put them on the brink of their first losing season in three years, along with a difficult time of shutting down the run in recent weeks.

UAPB (1-5, 0-4 Southwestern Athletic Conference) gave up 304 rushing yards, including a SWAC-record 267 by freshman Kobe Dillion, in a 34-7 Southern University victory this past Saturday, a difficult prelude to a historic game this Saturday in Little Rock against the University of Arkansas (4-3, 1-3 Southeastern Conference).

It'll mark the first time since 1944 the Razorbacks have played an in-state opponent. That year, Arkansas beat Arkansas A&M College -- now UA Monticello -- 41-0 in the season finale in Fayetteville.

"We're looking forward to it, but like I said, we've got to take care of ourselves so we can go represent the right way and play a brand of football I know we're capable of playing," Gamble said. "We haven't done that here in the last couple of weeks. We've got to get ourselves right so we can go and play this team."

UAPB has played on the Football Championship Subdivision level since 1997 and has logged one game against a team from a Power Five conference in its history -- a 39-7 loss to Texas Christian in the 2019 season opener.

Aside from taking on Arkansas' flagship university, UAPB is stepping out of SWAC play to face a team from the SEC.

"Going against an SEC opponent, for our guys and all of us, we can't get caught up in playing the letters. What do I mean by playing the letters? It's SEC," Gamble said. "We have to play against those guys in those helmets. Those are the guys we've got to get prepared for and go play."

The Razorbacks began the season with aspirations of an SEC championship that has eluded the program since it joined the league for the 1992 season, but three straight losses have dropped the Hogs, ranked as high as No. 8 this season, out of the Associated Press Top 25.

Injuries have beset Arkansas as well, with preseason All-America safety Jalen Catalon among others missing in action in recent games. Catalon was ruled out for the season before Saturday's loss to Auburn University and has undergone successful surgery, according to Coach Sam Pittman.

Arkansas' defense has 18 interceptions in 17 games under defensive coordinator Barry Odom and will challenge a UAPB offense that has tossed seven interceptions in six games this season, with Skyler Perry and Xzavier Vaughn splitting time under center.

"They're a good football team," Gamble said of Arkansas. "They're much improved from what they were in the past, much better than what they were when we signed the contract (in March 2019), I can tell you that. Right now, for us, we've got to take care of ourselves first before we move on and start talking about those guys, but we're starting to take a look at them right now. They're a well-coached football team and they play tough."

The top five in the latest BOXTOROW FCS coaches' and media polls are identical.

Jackson State (5-1), Prairie View A&M (5-1), Alcorn State (4-2), Florida A&M (4-2) and North Carolina A&T (3-3) rank 1-5 in both polls. The coaches' poll ranks only the historically Black college teams that compete in the Football Championship Subdivision, while the media poll ranks such teams across all divisions.

Pine Bluff High School graduate Ladarius Skelton completed 1 of 2 passes for 11 yards and a touchdown in Southern's win over UAPB.