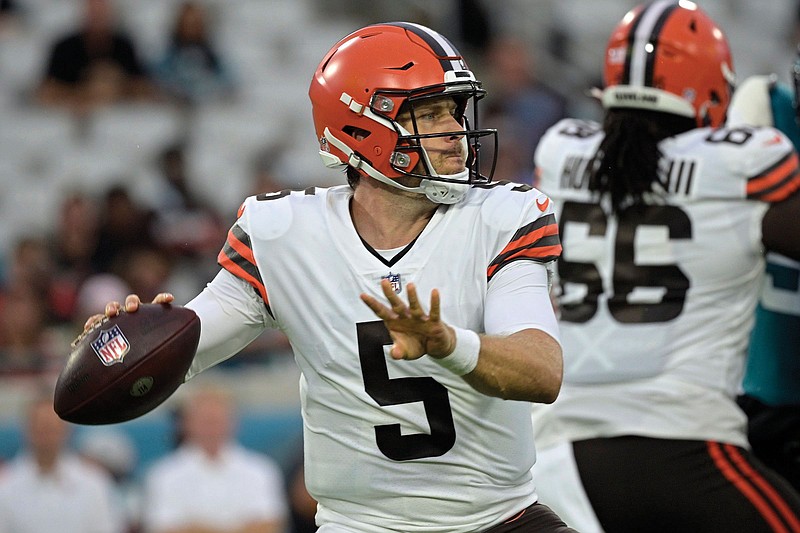 Case Keenum gets the start at quarterback today when the Cleveland Browns take on the Denver Broncos. Keenum starts in place of Baker Mayfield, who’s been dealing with a torn labrum in his left shoulder. (AP/Phelan M. Ebenhack)

CLEVELAND -- Baker Mayfield had to surrender to the pain.

Cleveland's starting quarterback, who has played the past four weeks with a torn labrum in his left shoulder, will sit out today's game against the Denver Broncos and backup Case Keenum will start.

"I feel very ready. I've been ready," said Keenum, who hasn't started since 2019 with Washington. "You can say, 'You don't have to get ready if you stay ready' and I've been ready since I got here."

The Browns (3-3) announced the switch on Wednesday, ending speculation about whether Mayfield would try to push through an injury to his non-throwing shoulder that he suffered last month and has worsened in recent weeks.

"Case Keenum will be our starter and we have full confidence in him to lead us and do the things necessary to put us in position to win," Browns Coach Kevin Stefanski said. "Baker fought really hard to play, he's a competitor and obviously wants to be out there but just couldn't make it on a short week.

"We know he will continue to do everything in his power to return as quickly as possible."

Mayfield was limited in practice on Tuesday, when he said he still expected to play. However, with this being a short week, there wasn't enough time for the swelling in his shoulder to go down and it was decided early Wednesday for him to rest, ending Mayfield's streak of 53 consecutive starts for Cleveland.

The loss of him means the Browns' entire starting backfield has been wiped out by injuries.

Nick Chubb and Kareem Hunt, the NFL's top running back tandem, will sit out with calf injuries. Cleveland could also be missing star receiver Odell Beckham Jr. due to a shoulder injury, and starting offensive tackles Jack Conklin (knee) and Jedrick Wills Jr. (ankle) haven't practiced this week and could be game-time decisions.

"It's always a great challenge," Keenum said when asked about missing key players. "That's what this league is about. Nobody's at 100%. After Week 1, nobody's playing at 100%. That's the way it goes. That's the hard truth, that's why it's a grown man's league."

On Tuesday, Mayfield was still planning to play despite a shoulder tear that was affecting his play and sleep. The 26-year-old underwent an MRI on Monday and the results were examined by a shoulder specialist, Dr. Orr Limpisvasti, the team physician for the NHL's Anaheim Ducks, who agreed Mayfield should rest.

Mayfield needs the swelling in his shoulder to go down first before he can strengthen the injured area. By sitting out against the Broncos (3-3), Mayfield will have some extra time because the Browns don't play again until Oct. 31 against Pittsburgh.

The 2017 Heisman Trophy winner hasn't missed a game due to injury since 2013 when he was a walk-on at Texas Tech.

"It's impressive to be around. It's inspiring. I know the guys feel the same way."

Keenum has made 62 career NFL starts, most recently for the Washington Football Team in 2019. The 33-year-old was signed as a free agent before last season by the Browns to back up and serve as a mentor for Mayfield.

He also had a strong knowledge of Cleveland's offense after working with Stefanski in Minnesota.

"I'm built for this," Keenum said. "This is what I've done my whole career, not knowing if I'm going to start up until game time, not knowing who is out there with me to introducing to players while I'm calling a play type stuff, so I'm excited.

Keenum had his best season in 2017 with the Vikings, passing for 3,547 yards with 22 touchdowns and seven interceptions. He has thrown just 13 passes in four games in two years with the Browns. 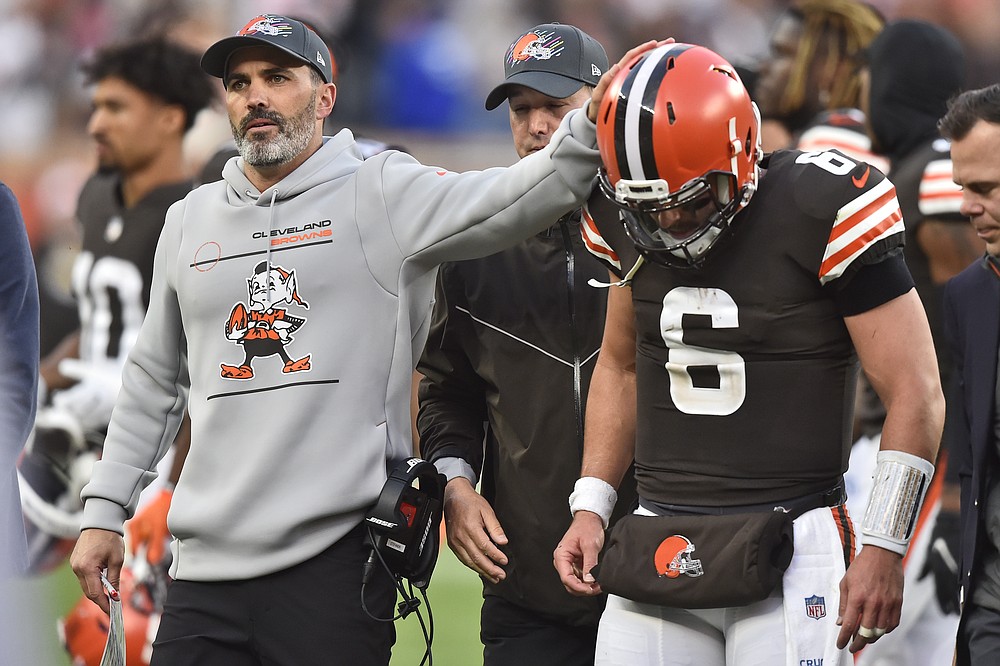 Cleveland Browns head coach Kevin Stefanski, left, touches the helmet of quarterback Baker Mayfield (6) after an injury during the second half of an NFL football game against the Arizona Cardinals, Sunday, Oct. 17, 2021, in Cleveland. (AP Photo/David Richard) 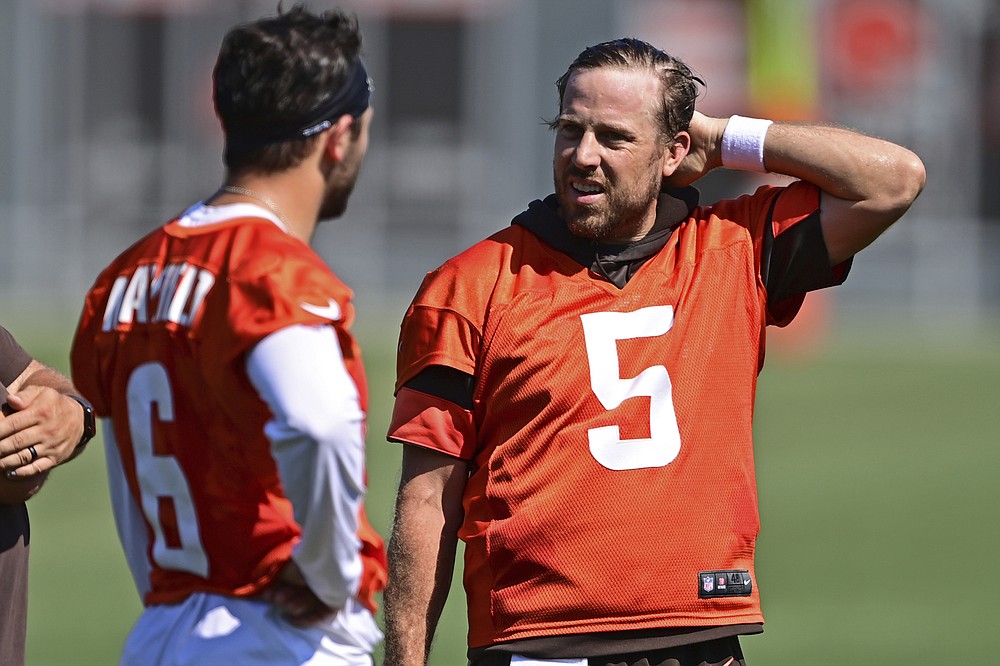 FILE - Cleveland Browns quarterback Case Keenum (5) talks with Baker Mayfield during an NFL football practice in Berea, Ohio, in this Tuesday, Aug. 24, 2021, file photo. Browns quarterback Baker Mayfield will sit out Thursday's game against the Denver Broncos with a painful left shoulder injury and backup Case Keenum will start. Cleveland announced the quarterback switch on Wednesday, Oct. 20, 2021, ending speculation about whether Mayfield would try to push through an injury to his non-throwing shoulder that he suffered last month and has worsened in recent weeks. (AP Photo/David Dermer, File) 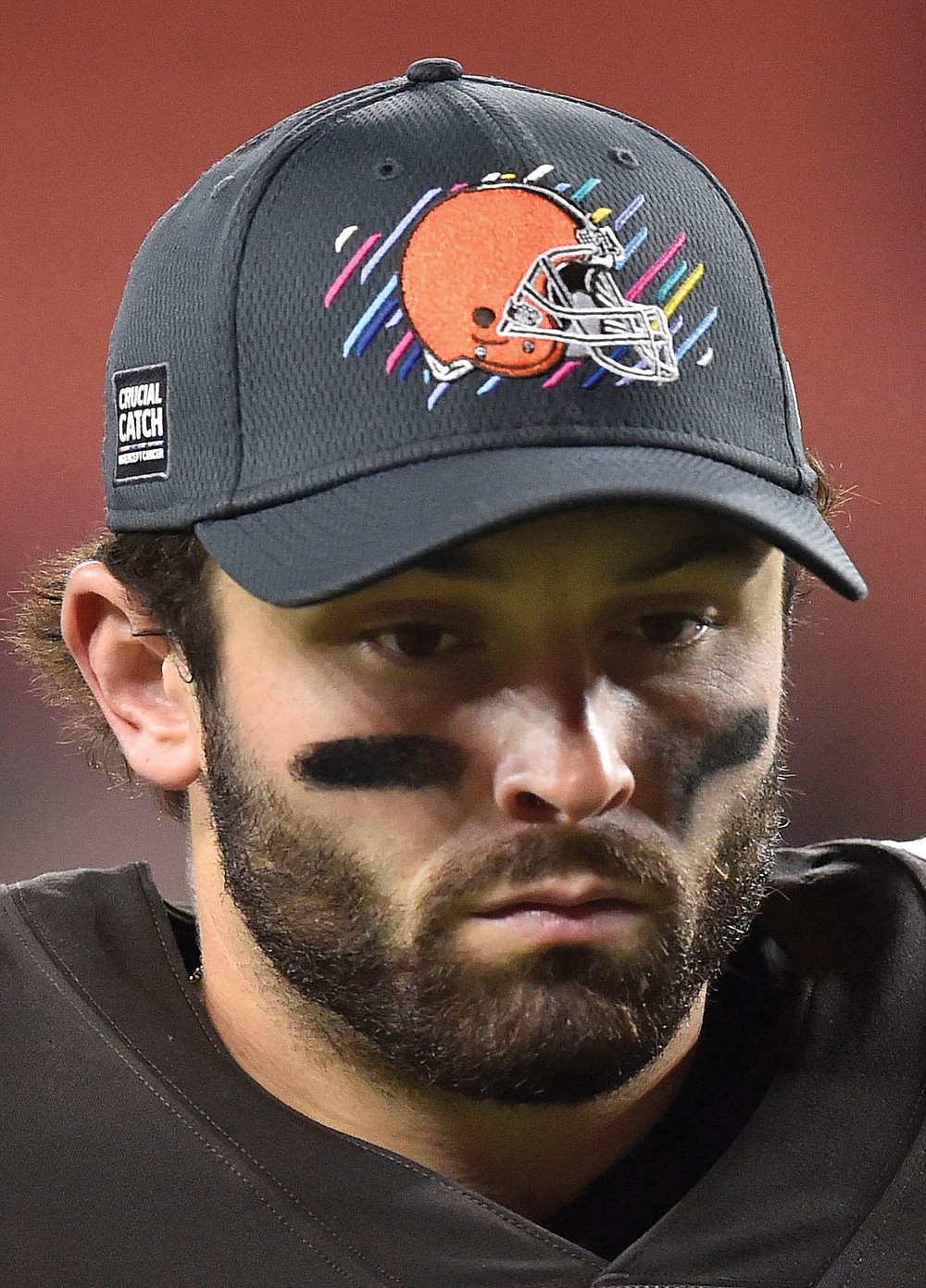 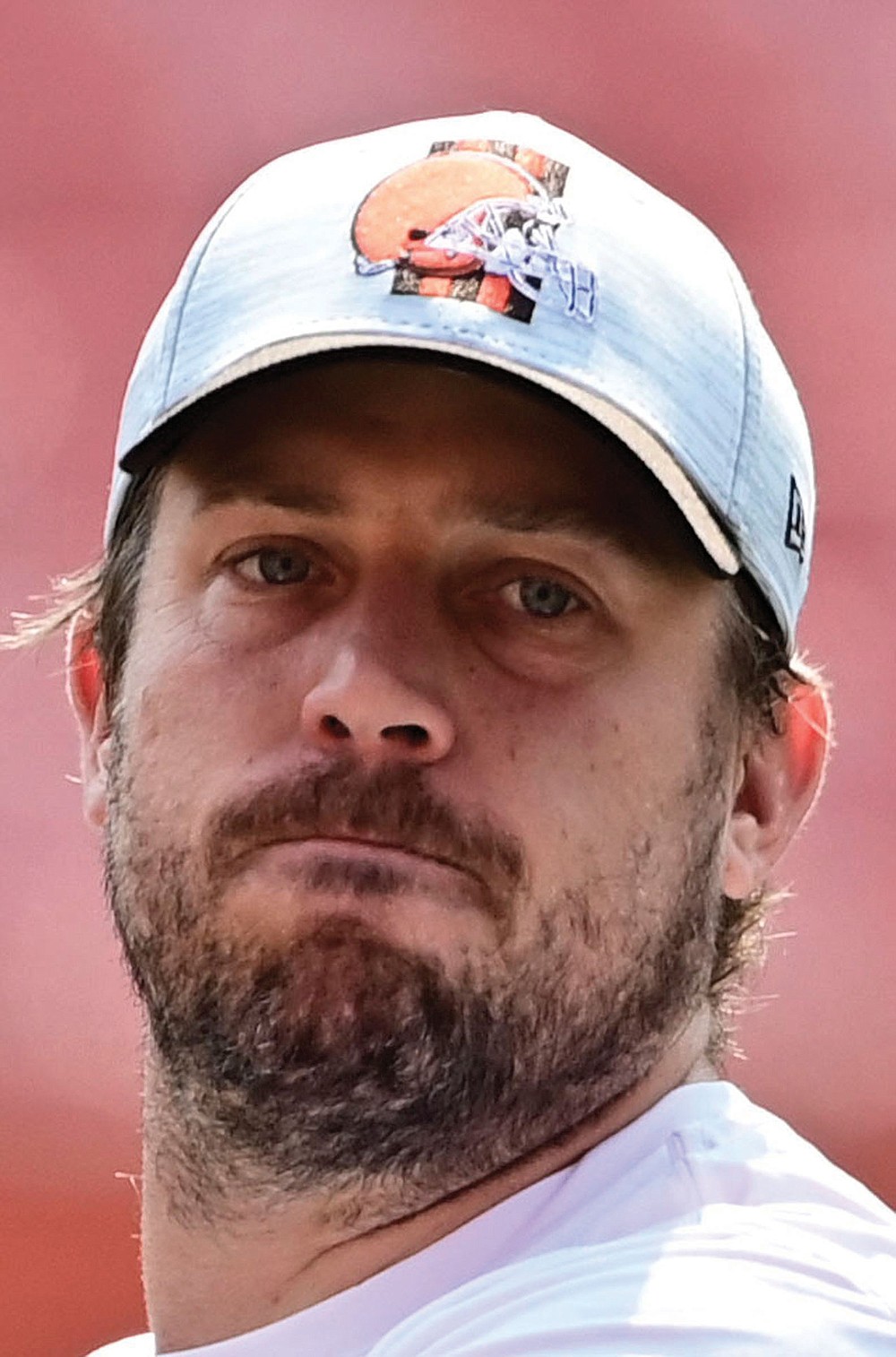 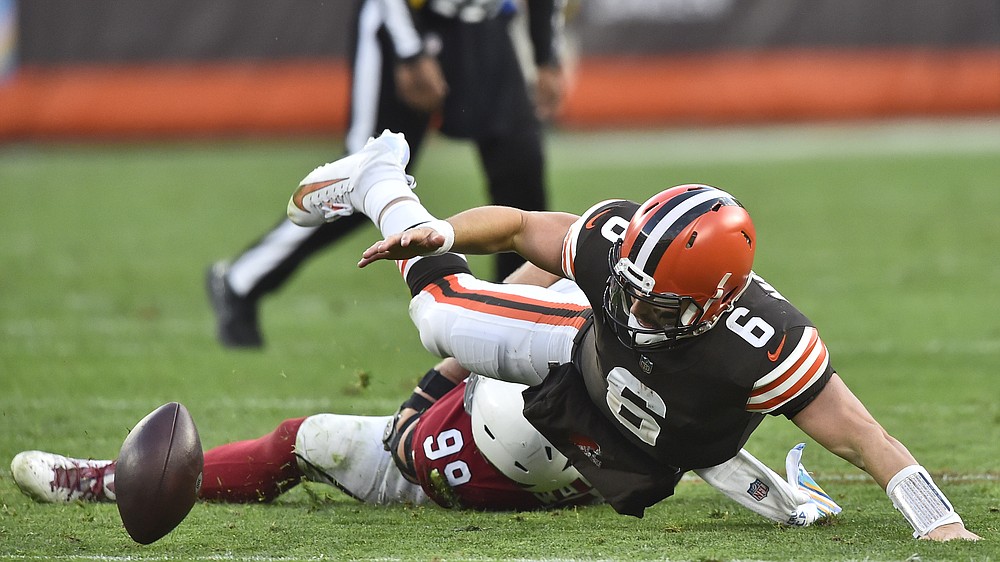 Cleveland Browns quarterback Baker Mayfield (6) fumbles and is injured on a play during the second half of an NFL football game against the Arizona Cardinals, Sunday, Oct. 17, 2021, in Cleveland. (AP Photo/David Richard) 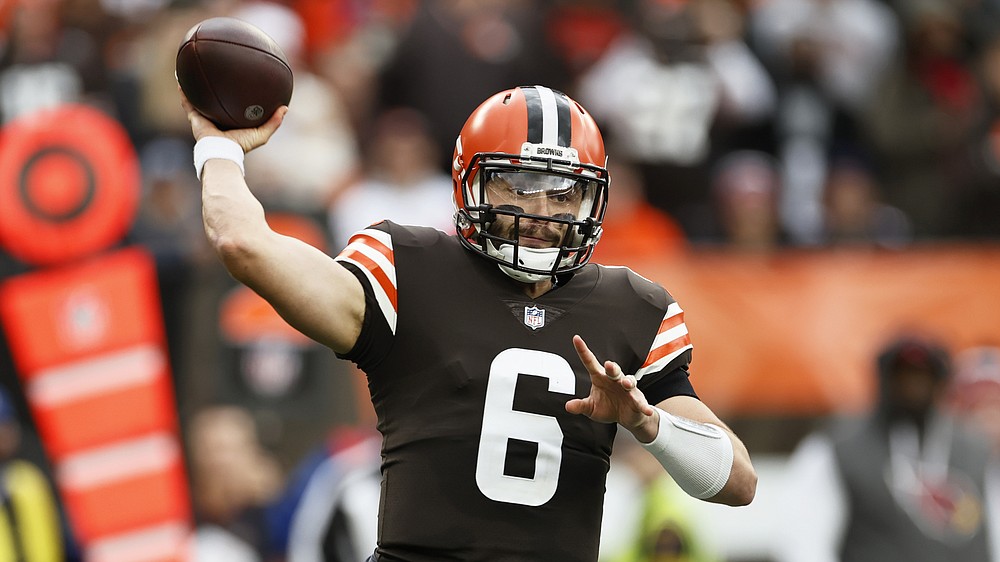 Cleveland Browns quarterback Baker Mayfield throws during the first half of an NFL football game against the Arizona Cardinals, Sunday, Oct. 17, 2021, in Cleveland. (AP Photo/Ron Schwane)